Tony Daltorio:  There it was, the bold Bloomberg headline: “Oil industry needs a half trillion dollars to repay debt.” 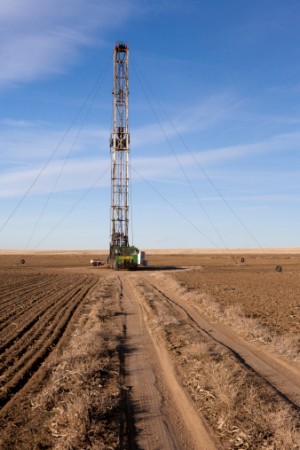 Bloomberg added that the ratio of net debt to earnings for the industry is the highest in two decades. A full 20% of this debt is owed by U.S. companies. Some of this debt is high-yield “junk” bonds issued by U.S. shale drillers. Other debts are loans to the shale oil companies issued by banks.

It is the paying back of this debt that has led to the mad strategy employed by many drillers: pump as much oil as you can, ignore the current glut, keep your fingers crossed, and hope for the best.

The Clock Is Ticking

The best they’re hoping for is, of course, to just keep the lights on.

The CEO of Pioneer Natural Resources (NYSE:PXD), Scott Sheffield, went so far as to say he thinks the company can “outrun” the conditions in the lousy oil market by pumping more and more.

That’s his strategy? Did he miss Economics 101 while he was in college?

It’s not surprising to me then that Pioneer is at the top of hedge fund manager David Einhorn’s hit list. Back in May, Einhorn listed a number of shale frackers he thought would not survive. The list also included Continental Resources (NYSE:CLR), Whiting Petroleum (NYSE:WLL) and Concho Resources (NYSE:CXO).

The clock is surely ticking on many shale oil companies.

Government regulators are beginning to heavily pressure banks to classify many of their loans to the industry as troubled assets. That will effectively shut off that source of funds to the industry.

Another source is disappearing too. Hedges that companies placed, protecting them against the fall in crude prices, are expiring.

And with oil prices so low, it does not make economic sense at the moment to initiate hedges. Most firms foolishly did not hedge when oil briefly was above $60 a few months ago. They, of course, thought prices would go even higher.

Already this summer, the industry had in place $1 billion less in hedges than at the start of 2014. Yet the industry keeps pumping out more and more oil, no matter what. Overall, Bloomberg reports, the shale industry’s output rose 19% over the past year.

This behavior led one of the biggest oil market bears to increase his bet. Pierre Andurand predicted the 2008 oil price spike and crash. And he’s at it again.

Last year, his hedge fund Andurand Capital made 51% before fees by betting on oil’s decline. Now he says the market will remain oversupplied for the foreseeable future. He even thinks oil can go below $30 a barrel.

It’s not a surprising call, considering the Saudis are still running flat out. And Iran is making very loud noises about regaining market share by selling at whatever price it takes to do so.