And we’re not talking about what you’ll hear in the mainstream media about whether the unemployment rate is finally low enough, or whether U.S. economic growth is finally strong enough to warrant tightening monetary policy.

No, what the Federal Reserve fears most is a problem of its own creation: the consequences of its bloated balance sheet. 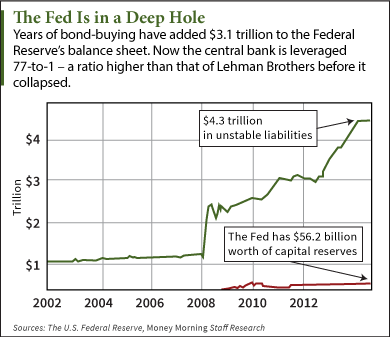 Many Americans know by now that the Fed’s easy money policies have included not just near-zero interest rates, but several programs of bond-buying known as “quantitative easing,” or QE.

Since the start of the 2007-2008 financial crisis, the Federal Reserve has sunk $3.1 trillion into QE, which has bloated the liabilities on the central bank’s balance sheet to approximately$4.3 trillion.

Meanwhile, the Fed’s capital reserves – the assets on the balance sheet – amount to a mere $56.2 billion.

That means the Federal Reserve, the biggest bank in the world, is leveraged 77-to-1; its liabilities are 77 times its assets. Just for some perspective, that’s more than double the leverage that Lehman Brothers had just before it failed.

And the problem could be much worse than it appears.

You see, the Federal Reserve reports the bonds that it holds at face value, not what their actual market value is – what a buyer would be willing to pay, known as “mark to market.”

So it’s possible that the value of the Fed’s vast bond holdings have already slipped below the value of its assets, which technically would mean the central bank is insolvent.

That’s not hard to imagine, as much of the assets purchased in the QE programs were “toxic,” particularly the mortgage-backed securities that triggered the financial crisis.

The Federal Reserve Is Trapped in Its Own Web

Even if the value of the bonds on the Fed’s balance sheet hasn’t yet slipped, the value will plummet as soon as interest rates rise.

It’s a catch-22 for the Federal Reserve, which needs to raise interest rates at some point to control the inflation that will be created when the U.S. economy finally starts percolating. But as soon as it does, its balance sheet will take a massive hit.

At this point a rise in rates to just 1% would wipe out most of the Fed’s net worth. So when interest rates return to more “normal” levels of about 4% to 5%, the Federal Reserve will be, at least on paper, underwater by hundreds of billions of dollars.

A study done last fall by MCSI Inc. (NYSE: MSCI) estimated that in the most likely scenario of gradually rising interest rates and moderate economic growth, the Fed’s mark-to-market loss will reach $216 billion in three years. In the worst-case scenario, the Fed’s loss would go as high as $547 billion.

That’s when America will realize the true cost of QE.

“They’ve done a few things to try to insulate themselves from this concern, but I suspect in the back of their minds it still haunts them,” Michael Feroli, chief U.S. economist at JPMorgan Chase & Co. (NYSE: JPM), told Bloomberg earlier this year. “It’s not going to go away.”

One big worry is that the Fed won’t be able to send money to the U.S. Treasury for several years. Money generated from the Fed’s investments – nearly $80 billion in 2013 – are required by law to be turned over to the Treasury.

“There is a chance when we could go through a period of time in which our income falls and we could even take losses if we decide to sell,” Fed Chair Janet Yellen said in response to audience questions after a Feb. 11 speech. “It is possible that in the course of trying to carry out monetary policy that there will be a period of a year, or even several years, in which those remittances fall to zero.”

Given that raising interest rates will make the problem worse, there is little doubt that the issue is already affecting Fed policy and will continue to do so.

And it’s not just the question of raising interest rates that has the Fed twisted up like a pretzel; any attempt to unwind the balance sheet over the next few years will mean realizing those huge losses.

“This unfavorable fiscal arithmetic might tend to push the Fed toward delaying its exit from the extraordinary easing measures it has taken in recent years,” wrote former Fed governor Frederic Mishkin in a research paper last year. “The problems facing the U.S. in the next decade could easily escalate into an unmanageable situation.”

But perhaps the biggest concern of all is what happens in the event of another major financial crisis.

“The last crisis was barely enough for the Fed to contain. They have used up all their dry powder. They can’t take the balance sheet any higher,” said Jim Rickards, who spent 35 years on Wall Street and worked as the financial threat and asymmetric warfare advisor for both the Pentagon and the CIA.