EconMatters: 3-Month Depreciating Yen Trade: The 3 month Japanese Yen trade which every fund manager from San Diego to Hong Kong has taken part in will sure help Japanese exporters and help spur more economic activity in what has been a real laggard in both business competiveness, and the race to weaken their currency that has occurred during the last five years. 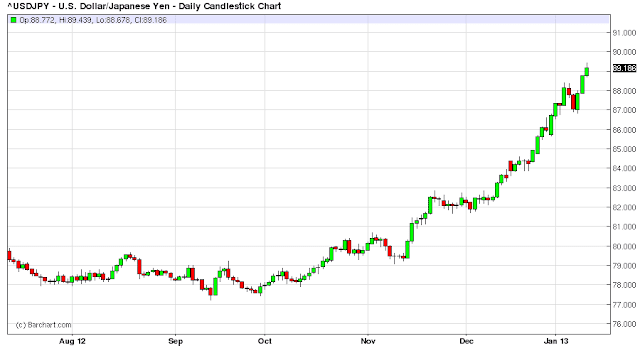 However, there are very few free lunches in the world, and I imagine there will be some costs or unintended consequences of this newfound commitment towards a weaker Yen.

Almost every currency has appreciated against the Yen the past 3 months, and the original target was placed at 90 for the USD/JPY cross, now analysts are targeting 100 for the cross.

On October 1st the JPY/CNY cross was 0.0806 and today the currency cross is 0.0697 for a pretty significant move against a currency who doesn`t like to strengthen against anybody if they can help it.

China has made an art out of currency manipulation, and built an entire competitive advantage on having an undervalued currency. 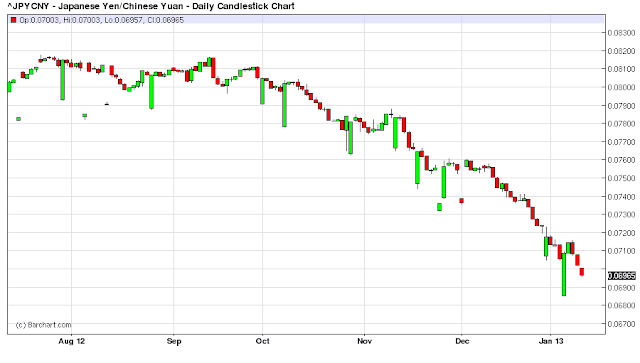 On Friday, China reported that inflation jumped to a six month high in December rising from 2% in November to 2.5% for consumer prices in December, the highest reading since June of 2012. The rise in consumer prices was attributed to the colder winter which reflected smaller crops and higher vegetable prices.

Well, a strengthening Yuan cannot be good for inflation as it just attracts more hot money into the country, and this sure cannot bode well for those hoping for additional stimulus measures coming out of China to spur economic growth in an economy that has struggled the past two years with higher inflation and lower trending growth.

There will be a lag before some of the effects of this substantial currency move by the Japanese Yen gets pushed through the Chinese economy and all of Asia for that matter, but it bears watching if the pattern of a depreciating Yen continues.

The last trade that was this popular was the “Short Euro Buy Gold in Euros Trade” that was popular for quite a spell in 2012.

This trade had a nice run, but really came apart towards the end of 2012, it was equally crowded with everyone from Hedge Funds to your local Greek cab driver, and if you polled most participants at the time, they all thought the end game for that trade was much higher in terms of Gold priced in Euros.

Well, the Euro strengthened considerably and Gold failed to take out previous resistance in terms of the Dollar, and the entire trade rolled over, forcing Gold to be sold into as the year ended with the entire trade falling apart rather aggressively. 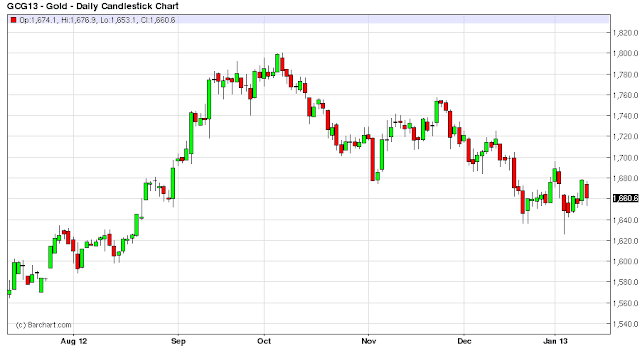 The Rebirth of the Carry Trade

So the Japanese Yen has weakened to such a degree in so short of a time and has brought back many carry trades, which has helped fuel the rise in both equities and oil.

However, things have been pretty smooth sailing with the end of year run-up, and money freely flowing into the New Year. Let`s see how that trade holds up with the first spike in volatility which is undoubtedly going to rear its ugly head sooner rather than later.

This is the true sign of whether the trend is more than a Hedge Fund fad, or has real legs that can be sustainable for two to three years, long enough to bring back one of the greatest of all carry trades in the history of modern day financial markets the Yen Carry Trade.

The Euro/Gold Trade turned out to be unsustainable, a mere fad in trader lexicon. It remains to be seen how sustainable the recent enthusiasm for the Weak Yen Trade is for the long term.