Rick Pendergraft:   Back in November I wrote about the iShares Russell 2000 ETF (NYSEARCA:IWM) and how the ETF was facing resistance in the way of the $119.50 area. The area had been the site of former support and looked primed to serve as resistance on any attempt to rally back up.

Here is the updated weekly chart with the same notations I made on the original chart from November. We see that the Russell 2000 fund managed to move slightly above the resistance, but it wasn’t able to close a week above it. 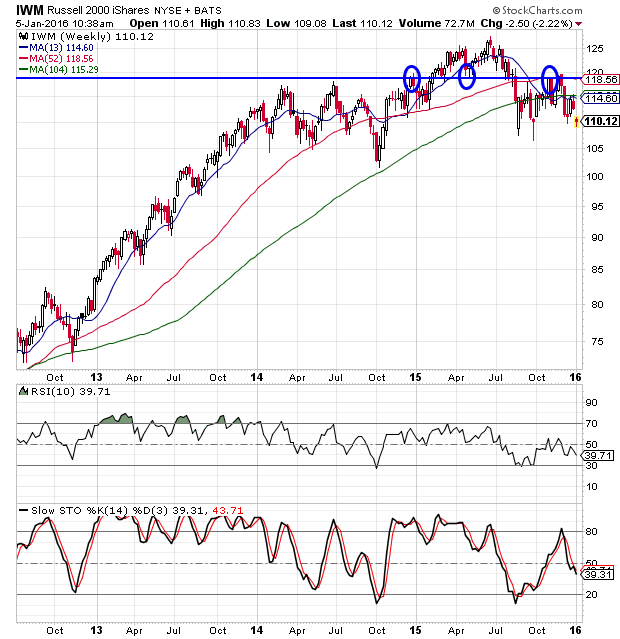 What bothers me more about the weekly chart on the IWM than the resistance is the pattern that is developing. See how it is having trouble moving back above its 52-week moving average and how it is below its 104-week moving average? It did something similar back in late 2007 and at the beginning of 2008.

The 13-week moving average made a bearish crossover of the 104-week in early 2008. After the crossover, the Russell 2000 fund moved sideways for several months before the bottom fell out in September 2008. When the IWM attempted to rally, it ran in to resistance at a combination of the 52-week and 104-week moving averages. That happened in June 2008 and then the fund made one more attempt at a rally before finding resistance at the 104-week. Then the bottom fell out of the IWM and the overall market. 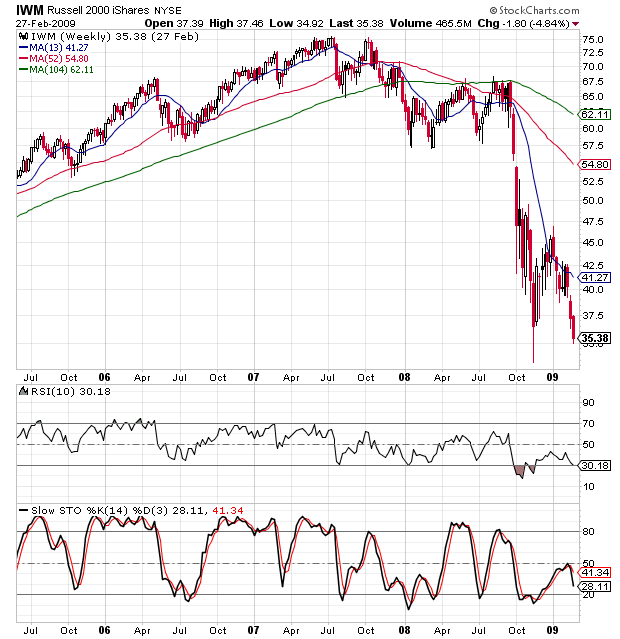 Flashing back to the current chart, you can see that the 13-week moving average made a bearish crossover of the 104-week back in October and now seems to be moving sideways, with the fund unable to retake its 52-week moving average.

Another factor in the price action of the IWM that concerns me is that it is the only ETF that represents one of the major indexes that is trading below its 104-week moving average. The ETFs that represent the Dow Jones Industrial Average, Nasdaq Composite and S&P 500 (DIA, QQQ, SPY) are all above their 104-week moving average, but that was the case back in 2007-2008 as well.

The IWM, representing the small-cap Russell 2000 Index, was the first index ETF to experience the bearish crossovers of the 13-week crossing below its 52-week and 104-week moving averages. And here it is first again and that is concerning.