Peter Krauth: As the European Central Bank (ECB) top brass battle it out on quantitative easing, the stakes couldn’t be higher.

Europe’s at the precipice of deflation, despite European Central Bank President Mario Draghi attempting to do “whatever it takes” to avoid that fate.

But dissent at the highest levels could quickly change the winds of investment in Europe.

The problems are getting deeper as three of the European Central Bank’s board members are throwing a wrench into his plans.

This seemingly trivial ECB stalemate could quickly trigger recession, or worse. Europe’smonetary union is feeling the pressure, and that’s adding further stress to its political union because, after all, it’s always about the money.

Here’s the inside story on how this could play out, and a way we can profit amid the confusion…

It might seem like forever, but it’s only been about six months since ECB chief Mario Draghi pledged a 1 trillion euro stimulus package.  Now, he’s starting to sound like the boy who cried wolf.

The former Goldman Sachs managing director and governor of the Bank of Italy made one big mistake so far: he promised something he couldn’t deliver… at least, not yet.

Increasingly, it’s looking like a showdown between the doves, anxious for more easy money, and the hawks, concerned and unconvinced that more QE will accomplish anything positive in the end.

It’s just a minor detail to us, but three ECB board members feel it’s enough to withhold their stamp on a wording change of the ECB statement on the central bank’s balance sheet.

Sabine Lautenschläger (Germany), Yves Mersch (Luxembourg), and Benoît Cœuré (France) couldn’t agree with the others whether Draghi’s 1 trillion euro lift would be “intended” or “expected.”

Meanwhile, yields on German sovereign bonds have turned negative, causing bond buyers to pay (rather than be paid) for the privilege of lending their money to the government.

Internal discord at the ECB could have much wider ranging dislocations….

Here’s Why Countries Are Hoarding Gold

In my last article, we discussed how Germany and Holland had secretly devised a “Plan B” as Europe was dealing with its sovereign debt crisis. And shortly afterwards, Germany announced plans to repatriate its gold.  The Netherlands just shipped 122 tonnes of their own gold from New York to Amsterdam – in secret.

Since then, the same executive board member, Yves Mersch, suggested publicly that the ECB could buy any asset, including gold, to boost inflation within the currency bloc.

And leading French politician Marine Le Pen is pushing to repatriate, as well as audit, France’s gold. Now Belgium has jumped into the fray, looking to bring home its gold reserves too.

So gold is clearly a way for investors to position themselves for protection and profit.

We also know that QE is not only not a panacea, it’s likely to be the demise of fiat money as we know it.

Japan has proven quantitative easing’s ineffectiveness. After endless rounds of stimulation attempts on its economy, it has been unable to grow for decades, with QE all the while succeeding in ballooning the national debt.  Its debt-to-GDP is the world’s second worst, close behind Greece.

QE is likely to arrive in Europe at some point, but barring some drastic event, it’s not happening for months at least.

Based on that premise, here’s what to expect.

As we can see in the accompanying chart, except for the Chinese yuan, the U.S. dollar’s clocked major gains against virtually every other major currency for the past 6 months, including the euro (shown here), for a massive 14% gain. 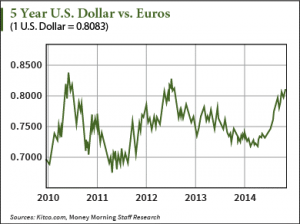 With new obstacles dashing Draghi’s near-term dreams of QE, look for the euro to soon bottom and start to reverse course against the dollar, heading higher.