The S&P 500 is having its best start to the year in 32 years. On top of that, it has rallied nearly 18% in the past four months, its best monthly streak since December 2010.

One strategist says that even as stocks reach for new highs in the near term, the rally might not be on solid footing further out.

“If we see the breakout above that September high, which was right around 2,941 — if that breakout is confirmed meaning we spend more than just a week above it, then we should see long term follow through on the back of that breakout,” Fairlead Strategies’ Katie Stockton said Tuesday on CNBC’s“Trading Nation” segment.

The S&P climbed to an intraday record of 2,949.52 on Monday — its first record intraday high since September. On Tuesday, the index finished at a record closing high, although it was trading about 4 points from that all-time high level.

Stockton argues that once the index can meaningfully hold above the 2,940 level, which was previously overhead resistance, such a breakout could foster additional momentum. 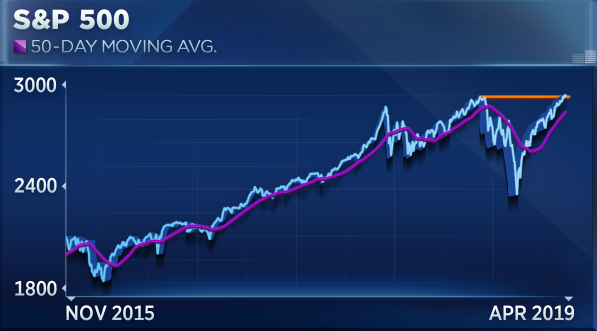 “Breakouts in general do tend to generate some momentum. Obviously the market already has some of that. And I do think with a breakout you get a little bit of a sentiment boost that then manifests itself in expanding breadth, so we should see participation expand with a breakout in the S&P 500, and that could occur to the benefit of the Russell 2000,” she said. The Russell, which tracks small-cap companies, has underperformed over the last year, gaining just 3% compared with the S&P’s 11% rise.

While Stockton thinks stocks have a little more upward momentum here, she also noted that a peak in investor sentiment — meaning the overall bullish attitude toward the market — may lead to a pullback in June.

“Sentiment really is the biggest headwind,” she said. “We have one measure that did reach an overbought territory, or overly bullish territory. We do look at these sentiment measures from a contrarian perspective. When they peak in that range, it tends to take several weeks for a pullback to develop in the major indices that’s significant, so that would put us out to early June. And I think that seems fair based on what’s going in in absolute terms.”

As stocks hover around record highs, Chantico Global’s Gina Sanchez argues that while “much better-than-expected earnings” will support “continued outperformance for the rest of the year,” investors should focus on specific areas rather than buying the market as a whole. Specifically, she prefers value to growth names, and she believes financials will outperform in the months to come.

“The market itself is changing tone. You’re starting to see more defensive. Value is actually starting to perform again. We’re seeing defensives sectors like utilities, staples, they’ve been performing,” she said. “We’ve been looking at the financials and they’ve had a really great month so far and I think that’s going to continue.”

The financial sector was the top-performing sector last month after gaining almost 9%. Sanchez argues that the Federal Reserve’s pause in interest rate hikes, as well as a “very strong IPO market” will “finally” lead to a “good year for the financials.”