Do you actually believe that the employment numbers are getting better?  Do you actually believe that there is a bright future ahead for American workers?  If so, then you really need to read this article.  The truth is that we are in the midst of the worst employment crisis since the Great Depression, and there has been absolutely no employment recovery.  In fact, the percentage of working age Americans that are employed is just about exactly where it was during the darkest days of the last recession.  But the mainstream media is not telling you this.  The mainstream media is instead focusing on the fact that the official “unemployment rate” declined from 7.6% in June to 7.4% in July.  That sounds like great news, but when you take a deeper look at the employment numbers some very disturbing trends emerge.

We are being told that 162,000 jobs were created in July.  Okay, so that is just barely enough to keep up with population growth, and most of the jobs that were created last month were part-time jobs.

Meanwhile, the jobs numbers for the two previous months were both revised down…

Will this month eventually be revised down too?

When it comes to measuring employment in the United States, I believe that a much more accurate measurement than the highly manipulated “unemployment rate” is the civilian employment-population ratio.  This ratio tells us what percentage of working age Americans actually have a job.

Just prior to the last recession, about 63 percent of all working age Americans had a job.  During the recession, that number plunged dramatically and ultimately fell below 59 percent, and it has stayed below 59 percent for 47 months in a row… 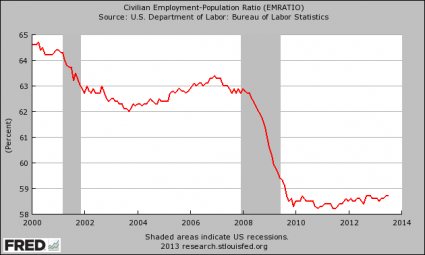 This is the first time in the post-World War II era that the employment-population ratio has not bounced back after a recession.

Since the end of 2009, we have been treading water at best.  But during that time, another disturbing trend has emerged.  Good paying full-time jobs are rapidly being replaced by low paying part-time jobs.

And this trend has definitely accelerated this year.  If you can believe it, an astounding 76.7 percent of the jobs that have been “created” in 2013 have been part-time jobs.