we spend far more than we bring in, our debt is growing much faster than our GDP is, our entitlement programs are growing at an exponential rate, our retirement system is a Ponzi scheme and the Federal Reserve is printing money as if there is no tomorrow in a desperate attempt to paper over all of our problems.  But we have all grown so accustomed to the debt-fueled prosperity that we have been enjoying for so many decades that it actually feels “real” to most of us.  Unfortunately, history has shown us that it is simply not possible to grow your debt faster than your economy indefinitely.  At some point your consumption will drop back to a level more equal to your production.    Sometimes that adjustment can be gradual, but other times it can be extremely painful.  In our case, we have been living way above our means for so long that it would take a major economic miracle just to keep our adjustment to an “exceedingly painful” level.  We are living in the largest debt-fueled prosperity bubble in the history of the world, and our unsustainable economy is going to crash and burn at some point.  Hopefully it will be later rather than sooner, but a crash is most definitely coming.

The following are some of the reasons why the bubble economy that we are living in right now is unsustainable….

Most Americans do not really understand what a “trade deficit” is, but it is at the very core of our economic problems.

Basically, we buy far more stuff from the rest of the world than they buy from us.  We send them huge piles of our money, and they send us oil that we burn in our cars and cheap plastic products that we end up throwing away.  We keep doing this month after month after month, and this is systematically making us poorer as a nation.

In 2012, it is being projected that our trade deficit will fall somewhere between 500 billion and 600 billion dollars.

At this point, the United States has a trade imbalance that is more than 7 times larger than any other nation on earth has.

Overall, the United States has run a trade deficit of more than 8 trillion dollars with the rest of the world since 1975. GET A FREE TREND ANALYSIS FOR ANY STOCK HERE!

But we didn’t do that.

We chose to allow tens of thousands of businesses, millions of jobs and trillions of dollars of our national wealth to leave the country.

But both political parties have been endlessly pushing the “free trade” agenda.  They have both promised that it would bring us tremendous prosperity.

Well, just take a look at our formerly great manufacturing cities today.  Do they look prosperous to you?

It turns out that Ross Perot was right when he warned about the “giant sucking sound” that would happen if NAFTA was implemented.

That didn’t work out so well, did it?

What about opening up trade with China?

Back in 1985, our trade deficit with China was approximately 6 million dollars (million with a little “m”) for the entire year.

In 2011, our trade deficit with China was 295.4 billion dollars.  That was the largest trade deficit that one nation has had with another nation in the history of the world.

This is a huge reason why shiny new factories are going up all over China, and our blue collar cities are turning into rotting war zones filled with unemployed people.

If you can believe it, the United States has actually lost more than 56,000 manufacturing facilities since 2001.

Until we fix the trade deficit we are going to continue bleeding factories, jobs and national wealth at an astounding pace.

It is being projected that U.S. GDP will grow at a rate of about 2.2 percent this year.

The problem is that our federal budget deficit will be somewhere around 7 percent of GDP this year. GET A FREE TREND ANALYSIS FOR ANY STOCK HERE!

With each passing day we are losing ground.  No other nation on earth has been able to run up debt like this indefinitely, and neither will we.

Does this chart look like a healthy situation to you?…. 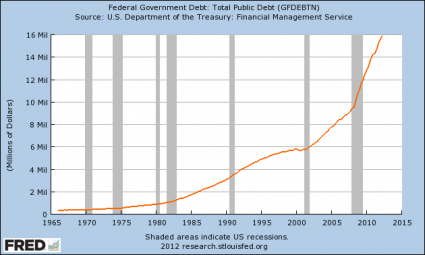 Sadly, all of this government debt is just about the only thing holding up our economy at this point.  Since Barack Obama has been in the White House, the U.S. national debt has increased by about 5.5 trillion dollars.  Of course the Obama administration has spent a lot of that money on incredibly stupid stuff, but it still gets into the pockets of average Americans that in turn spend it on food, gas, mortgage payments, etc.

If we could go back in time and suck that 5.5 trillion dollars of extra spending out of the economy we would be in a horrible economic depression right now.

But that does not mean that borrowing and spending all of that money was the right thing to do.  We have stolen it from our children and our grandchildren and we are going to stick them with the bill.

That is highly immoral and it is a national disgrace.

Yet we continue to do it because we can’t help ourselves.  We are ruining the future of this nation in order to make the present more pleasant for ourselves.

We are completely addicted to debt and we can’t stop.  We know that we are destroying the future of the United States but we have absolutely no self-discipline.

But most Americans seem fine with that.

Most Americans don’t even really know why this is happening, and most don’t really seem too concerned about finding out.  They just want the good times to continue to roll.

Sadly, the truth is that our financial system is designed to create government debt.  It is one of the primary purposes of the Federal Reserve system.

At this point, the U.S. national debt is more than 5000 times larger than it was when the Federal Reserve was first created.

So I guess you could say that the Federal Reserve is doing a good job of what it was designed to do.

And until we change the system things are going to continue to get worse until the entire system collapses.

Boston University economist Laurence Kotlikoff is warning that we are basically facing financial armageddon if something is not done.  Kotlikoff speaks of a “fiscal gap” which he defines as “the present value difference between projected future spending and revenue”.  His calculations have led him to the conclusion that the United States is facing a fiscal gap of 222 trillion dollars in the years ahead.

Where in the world are we going to get an extra 222 trillion dollars?

Every society needs a safety net, but we are rapidly getting to the point where there are going to be more Americans on the safety net than there are Americans supporting it.

Back in 1983, less than 30 percent of all Americans lived in a home where at least one person received financial assistance from the federal government.

Today, that number is up to an all-time record of 49 percent.

Many people don’t believe me when I tell them that more than 100 million Americans are enrolled in at least one welfare program run by the federal government right now, and that does not even count Social Security or Medicare.

But it is actually true.

Overall, there are nearly 80 different “means-tested welfare programs” that the federal government is currently running.

But of course the biggest financial burdens are Medicaid, Medicare and Social Security.  All three are on course to become completely and totally unsustainable.

For example, the number of Americans on Medicaid soared from 34 million in 2000 to 54 million in 2011, and it is being projected that Obamacare will add 16 million more Americans to the Medicaid rolls.

Ouch. GET A FREE TREND ANALYSIS FOR ANY STOCK HERE!

Well, what about Medicare?

Sadly, Medicare is even more frightening.

How in the world can we afford that?

At this point, Medicare is facing unfunded liabilities of more than 38 trillion dollars over the next 75 years.  That comes to approximately $328,404 for each and every household in the United States.

Social Security is in really bad shape as well.

By 2035, that number is projected to soar to a whopping 91 million.

Overall, the Social Security system is facing a 134 trillion dollar shortfall over the next 75 years.

Where are we going to get that money?

Of course the national debt is not out only debt problem.  All over the country there are state and local governments that are on the verge of insolvency.  Corporations and financial institutions are leveraged like crazy.  And of course consumers have absolutely gorged on debt over the past several decades.

As a result, we are drowning in debt from sea to shining sea.

The good news is that our GDP is more than 12 times larger than it was 40 years ago.

The bad news is that the total amount of debt in our country is more than 30 times larger than it was 40 years ago…. 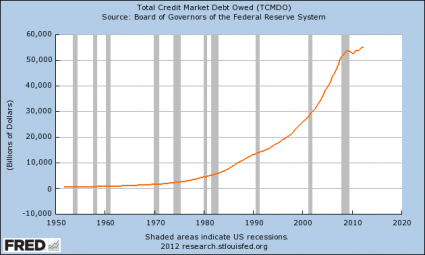 Obviously this is something that cannot go on forever.

We simply cannot keep accumulating debt much faster than our economy is growing.

Nobody knows exactly when the “adjustment” is coming, but it most definitely will arrive at some point.

The Federal Reserve has attempted to monetize many of our economic problems by printing gigantic mountains of money in recent years.

In a desperate attempt to keep our unsustainable financial system from collapsing, the Federal Reserve has decided to start printing unprecedented amounts of money.  Just look at what this has done to the monetary base…. 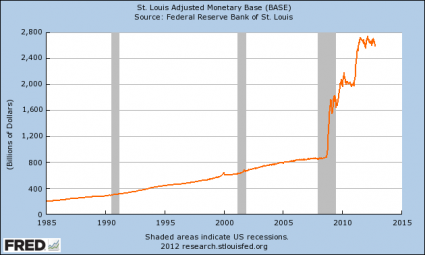 And QE3 really hasn’t even started to kick in yet.

So how bad will that chart look after QE3 has been adding another 40 billion dollars a month to the financial system for a while?

You know, the Weimar Republic was absolutely convinced that they were doing the right thing by printing lots of money too.

But in the end that didn’t work out very well for them at all…. 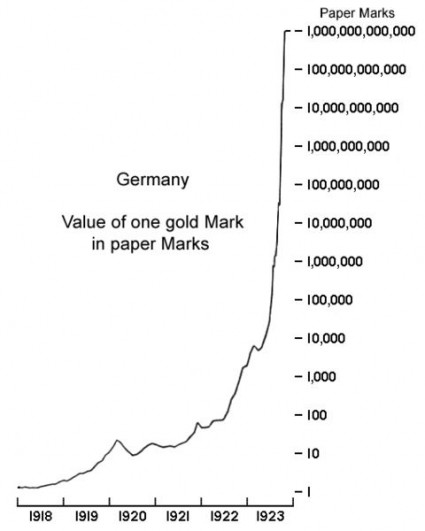 So should we really be celebrating the fact that the Federal Reserve is going down the same path that the Weimar Republic did?

Demonocracy has released a great new graphic that does a wonderful job of illustrating just how huge the amounts of money involved in QE3 are going to be.  If you have not seen it yet, you can view the graphic right here.

If that were to happen the coming shift in our standard of living would happen much more rapidly. GET A FREE TREND ANALYSIS FOR ANY STOCK HERE!

Please share this article with as many people as you can.  We need to wake people up and get them to understand how incredibly vulnerable our financial system really is.  We are on a path that is unsustainable any way that you want to look at it, and if something dramatic is not done our economy is going to experience an unprecedented collapse.

So what happens if nothing is done and everything crashes all around us?

Well, I hope that you are prepared because it isn’t going to be pretty.