Despite an improved risk sentiment, copper price is still sitting at 20% below its April peak mostly from the following concerns:

The pessimism has prompted some analysts forecasting further downward pressure, or even a catastrophe of the red metal.

On the other hand, much of the focus has been put on China, while some other equally important factors are currently being overlooked by investors.  The following sections will highlight some of the emerging trends in the copper market.

China Is Not the Only Game in Town

Copper is a base metal used predominantly in building construction, power generation and electronic products. As such, the metal tends to be highly sensitive to the macro environment.

China is the world’s biggest copper user—about 27% of world copper demand (Goldman Sachs estimate)– followed by the U.S. Since the growth in the United States is likely to be subpar in the medium term, China will likely remain the main catalyst of copper.

However, as other emerging and developing economies race to catch up with the West, China is not the only game in copper town.

A review of the top 10 global mega construction projects (See Graph) identified by Engineering News-Record (ENR) shows multi-billion-dollar projects ranging from the 60-Billion land reclaimation in Egypt to Saudi’s $80 Billion effort to diversity its economy away from oil and gas. 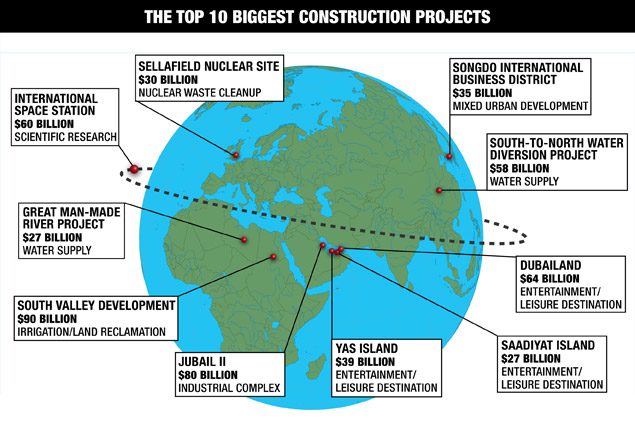 The head of India’s state-run Hindustan Copper Ltd told Reuters that “India’s copper demand will likely grow by at least 7% in 2010-11 fed by power sector, while demand from real estate and construction remains weak.”

According to Platts, India suffers from a peak power deficit of about 12.7%, and is expected to begin tendering nine major Indian power transmission projects following approval from the regulatory authority.

The projects are estimated to cost more than $12.3 billion in total. There are also other power projects around the rest of Asia as well. (See Table) 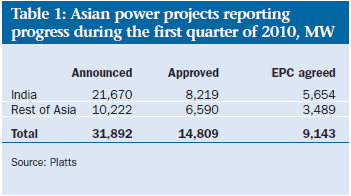 These are all indications that copper demand and pricing is also supported by the social and economic evolution outside of China, amid the new normal of global twin-speed growth between Asia and the West.

Riding on a $586 billion stimulus package and record lending, China imported a record 3.2 million tons of the refined metal in 2009, up 119% from the previous year. So, the recent decline of China copper imports has caused much distress among investors.

Bloomberg’s calculation, based on customs data, shows June shipments of copper and products of China declined 31% from a year ago, and 17% from May. This is a third straight month of such decline. In addition, Xinhua also reported that China’s refined copper imports this year is expected to drop 28%

The drop in imports may be partly attributed to inventory destocking, and not entirely indicative of all the underlying market factors. In a separate analysis (see chart), Reuters concluded that

“Apparent daily appetite for refined copper in China grew 5% in May from April, as a fall in imports was offset by rising output and a drop in stock levels.” 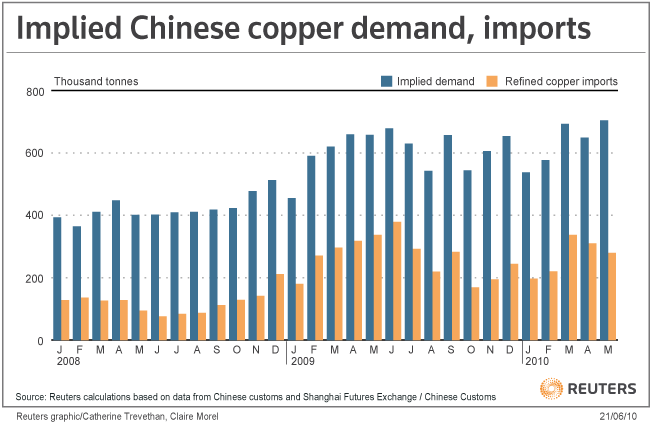 Source: ChinaMining.org
Real Estate = 10% of China Copper Demand
China’s property boom has contributed much to its surging copper imports and demand pushing up prices last year.  So understandably, much spotlight has been put on how China’s chokehold on property would tank copper.

Realistically, the real estate sector accounts for just a portion–about 10% as estimated by Standard Chartered–of China’s total copper consumption; whereas power generation is actually the biggest demand driver of copper.  Furthermore, there are other sides of China’s property story as well.

China’s urban population is expected to surpass 700 million in the next five years, exceeding the number of rural dwellers for the first time, as reported by Xinhua. The country’s population — already the world’s largest at 1.3 billion — is expected to reach 1.4 billion in 2015.

This population growth and migration pattern would suggest that power grid development— the largest consumer of copper–is expected to continue, as many Chinese cities are already struggling with overloaded infrastructure.

Moreover, it also indicates the current cooling-off in the property market, along with other copper consuming sectors, like automobile and home appliance, is likely temporary in nature.

Xstrata, the world’s fourth largest copper producer, recently noted that building of new floor space in China is still growing at more than 20%.  A China Daily article also described how billions of yuan continue to flow into new commercial and residential development despite a vacancy rate increase of 8.6%.

China’s banks and state-owned enterprises are behind the demand for new buildings to get their own corporate identities. In addition, city dwellers have developed higher lifestyle expectations and want some sophistication in their personal space.  Not to mention the growing one million+ “Ant Tribe” will eventually outgrow their slums and need nicer places as well.

On the supply side, Chile, the United States, Peru and China are the top four copper producing countries in the world, based on the latest data compiled by U.S. Geological Survey (USGS). Chile’s Codelco, Freeport-McMoRan Copper & Gold Inc. of the U.S., Australia’s BHP Billiton, and Xstrata based in Switzerland, are the four largest producers.

Credit Suisse Group AG noted in a June 30 report, quoted by Bloomberg, that mining companies are missing analysts’ output forecasts because of lower-quality ore, providing “a bullish pricing signal,” while Macquarie Bank estimates next year’s shortage may be the biggest since 2004

As another sign of possible supply stress, global copper inventory level has been on a steady decline, particularly at London Metal Exchange (LME) and Shanghai (see chart).

Bloomberg reported that the stockpile on LME has fallen about 20% since mid-February, and is now equal to about 8 days of global demand. 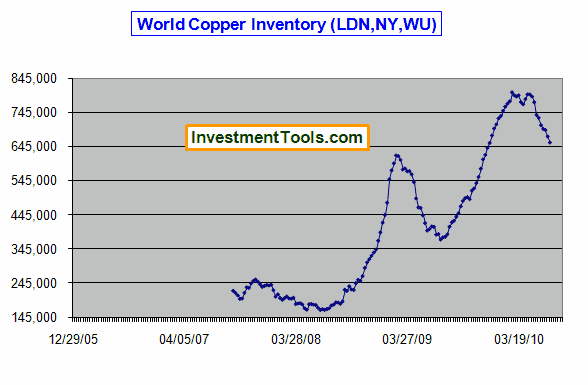 Although the longer term trend of copper is quite promising based on the discussion here, with its recent Death Cross, prices of the red metal will likely be range-bound in the short term. (see technical chart) 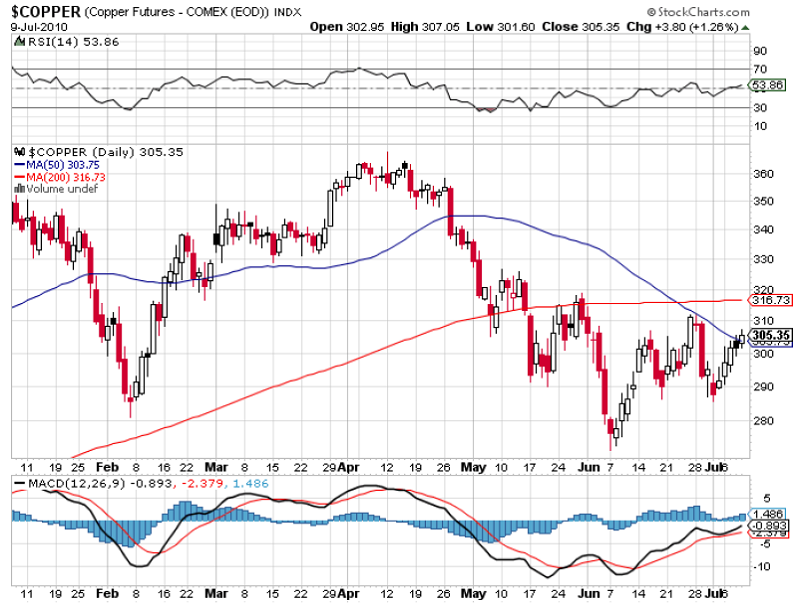 With measures by Beijing to cool growth and curb property speculation taking hold, and many economic uncertainties primarily coming from Europe and the U.S., a slowdown in the second half of this year from the U.S., Europe, or China, could push copper down to the $2.50 range on COMEX.

Alternatively, if global economy ends up showing definitive signs of growth and recovery, then copper should move towards or above $3.50.

About: Economic Forecasts & Opinions The theory of quantum mechanics and Einstein’s theory of relativity (E=mc2) have taught us that matter (yin) and energy (yang) are inter-related and interdependent. This interconnectness of all things is the essense of the concept “yin-yang”, and Einstein’s fundamental equation: matter equals energy.

The same theories may be applied to equities and commodity markets. All things within the markets and macro-economy undergo constant change and transformation, and everything is interconnected.

That’s why here at Economic Forecasts & Opinions, we focus on identifying the fundamental theories of cause and effect in the markets to help you achieve a great continuum of portfolio yin-yang equilibrium.

We have listed three ETFs that will provide you with exposure to copper including the iPath DJ-UBS Copper TR Sub-Idx ETN (NYSE:JJC),  First Trust ISE Global Copper Index (NYSE:CU), and the Global X Copper Miners ETF (NYSE:COPX) below.

The investment seeks results that correspond generally to the price and yield performance, before fees and expenses, of the Dow Jones-UBS Copper Total Return Sub-Index. The note is designed to reflect the performance on copper contracts. The index is composed of Copper High Grade futures contract traded on the New York Commodities Exchange.

The Fund seeks investment results that correspond generally to the price and yield (before the Fund’s fees and expenses) of an equity index called the ISE Global Copper™ Index (the “Index”).