There’s only one thing voters hate worse than Democrats: That is, of course, Republicans. The latest NY Times/CBS News poll found that, while voters rate the performance of Democrats negatively, they view Republicans as even worse with 63 percent disapproving of Democrats and 73 percent disapproving of Republicans. Still, the prevailing “they all suck” attitude is not good news for the Democrats as they have the most seats up for re-election and over 63% of the voters are pretty much determined to vote for “the other guy.”

I would propose instead that we begin a national campaign to elect “None of the Above” as a write-in candidate. I don’t expect it to change much but it would force a lot of run-off elections and would send a real message to Washington that we are sick of the nonsense, that we are “as mad as Hell – and we’re not going to take it anymore.” If you watch this video clip from 1976 you’ll realize how little progress we’ve made in 35 years of American politics. If only we’d taken Howard Beale’s Oscar-winning advice at the time and gotten off our sofas and actually said: “I’m a human being, goddammit! My life has value!” – maybe we could have done something about the Corporate Kleptocracy this nation has morphed into. Now, instead, we are once again asked to flip the switch for Republicans or Democrats and, if the candidates weren’t labeled, it would be very hard to tell most of them apart.

In many election cycles, voters readily acknowledge that they are dissatisfied with government or Congress in general, but they tend to have a stronger connection toward their own representative. That is not the case this year, with 55 percent of voters saying it is time for new leadership and only 34 percent saying their lawmaker deserves re-election. It is a historic high for a question asked in each midterm election year since 1990. Of course, the MSM plays a huge role in this as 8 out of 10 Americans rate “the economy” negatively but, when asked about their own family’s financial situation, 6 of 10 say it is the same or improving. So 40% of the people feel their own situation is negative but 80% think it’s negative for everyone else. Gee, I wonder where they get that impression?

Voters do not perceive Republicans as having better ideas and disagree with them on the biggest economic issue of the campaign — whether to extend the Bush-era tax cuts for the wealthy — a sign the party has no real advantage on key pieces of their agenda, which makes it more necessary to run as a generic alternative to the party in power. The economy and jobs are increasingly and overwhelmingly cited by Americans as the most important problems facing the country, while the federal budget deficit barely registers as a topic of concern when survey respondents were asked to volunteer their worries.

All this dissatisfaction with the economy and our leaders does not bode well for the markets as we test the top half of our range at the 5% rule. For the 19th consecutive week last week, investors continued to dump mutual funds in favor of bonds with $10Bn of outflows for September alone. As I’ve been warning Members during this rally, the volume has been too low to take it seriously and we are not making serious breakouts of our key levels yet: 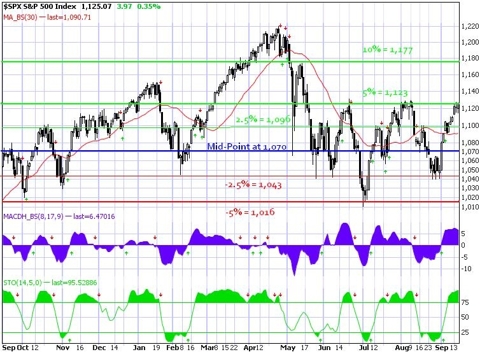 We’d love a reason to get more bullish but, we did our bullish shopping when bull was out of season and got such good bargains that it’s getting hard for us to pull the trigger here, at what may be the top of a tight range that may last into earnings season. On June 7th, we initiated the Q2 Buy List and on June 11th, the market was so low and (we thought) so wrong, that we set up a virtual portfolio aiming to turn $10,000 into $50,000 by Jan 21st (currently $24,275) and the dip at the end of June led to us Rounding Out Our Top 20 Picks on the 26th but the market wasn’t done “crashing” so we took 9 Fabulous Dow Plays Plus A Chip Shot (WFR) on July 7th.

On August 29th, we got another dip but not as good as the last one so we went with the strategy of “Defending Your Portfolio With Dividends” and, on September 3rd, I decided we may have been a little too conservative as we looked like we’d break over 1,070 and hold it so I added “September’s Dozen,” which were 12 more aggressive trade ideas for Members who may have felt they were being too bearish as we were breaking up. So that’s where we stand and it’s important to keep that in perspective for new Members. As I said to Members in Tuesday morning’s Alert:

Remember – these are ideas for hedges to cover long-term BULLISH positions (see Portfolios Tab). We end up talking a lot about bearish plays as we move higher but keep in mind that we are still generally bullish in our outlook but markets don’t go straight up and there’s no reason not to try to take advantage of the dips along the way.

So, at thin lines (2.5%) we’re willing to be a little more aggressive but thick lines (5%) make us need the market to PROVE it still has game above our levels. There has been little to excite us on the “buy and hold” side of the game this year but we’ve been fortunate with our timing in our bottom-fishing expeditions. But the real money has been made on the dips as we’ve paid attention to our ranges and taking those high-reward covers at both the June and August tops. Now is certainly the time for caution and we’re using (NYSE:TZA), (NYSE:SDS), (NYSE:DIA) and (NYSE:SQQQ) as various hedges (with option plays, of course) to cover the above-mentioned bullish plays.

Our HOPE is we consolidate near the 5% line into earnings (and we have (NYSE:FDX), (NASDAQ:RIMM) and (NASDAQ:ORCL) today) and that earnings are good enough to give us reason to look up to 1,200 again, but hope doesn’t pay the bills so we watch and wait – PATIENTLY for clarity.

Asia did some stuff today and Europe did some stuff today but none of that matters as we have our usual 450,000 lost jobs for the week today and we’ll get the Philly Fed at 10 (NY Fed was not so great) and tomorrow is CPI and Michigan Sentiment (not sounding good based on NY Times poll above). FedEx (NYSE:FDX) had good numbers and raised guidance but missed by a penny and are down 2.8% pre-market, which will ding the transports at the open but I love them at $80 if they get that low.

Tomorrow is quadruple-witching end-of-quarter options expiration day so we could be up or down 200 points on the Dow or, more likely, flat as a pancake but next week has plenty of excitement with housing news (boo!), the FOMC Rate Decision (0.25% forever!), Leading Economic Indicators and Durable Goods (boo!) on Friday to put a real stake through our hearts ahead of GDP the next Thursday.

In other words, after careful consideration, I think it would be prudent to maintain disaster hedges through the weekend.

Let’s all be very careful out there!

Philip R. Davis is a founder of Phil’s Stock World (www.philstockworld.com), a stock and options trading site that teaches the art of options trading to newcomers and devises advanced strategies for expert traders. Mr. Davis is a serial entrepreneur, having founded software company Accu-Title, a real estate title insurance software solution, and is also the President of the Delphi Consulting Corp., an M&A consulting firm that helps large and small companies obtain funding and close deals. He was also the founder of Accu-Search, a property data corporation that was sold to DataTrace in 2004 and Personality Plus, a precursor to eHarmony.com. Phil was a former editor of a UMass/Amherst humor magazine and it shows in his …More writing — which is filled with colorful commentary along with very specific ideas on stock option purchases (Phil rarely holds actual stocks).