It’s Time: For a little common sense. Some opponents of peaceful uses of “atomic energy,” as it was once called (and to defuse all the rhetoric, perhaps should be once again) claim that atomic energy can never be safely controlled, that radioactive waste is a mega-problem that can never be solved, and that the cost of atomic energy is too great a burden for the nation to bear.

No, they aren’t. These claims from certain quarters fail the common-sense test. Just look around the world to see the reality. Other nations are cutting their dependence on foreign dictators and fanatics. But, in this country, Three Mile Island provided a scare that we’ve never recovered from. (With Chernobyl, 6 years later, providing an even bigger scare, even though it would never even have been built in this country!) 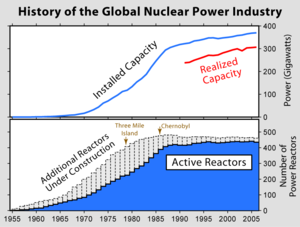 Three Mile Island (TMI), which occurred 31 years ago, effectively shut down atomic energy in USA. Chernobyl was the second and final straw, as is evidenced by the reduction in power plant construction in this chart.

But what really happened at TMI? A huge mistake, no question. Coolant escaped from a pressurized water reactor at Unit 2 that allowed a partial core meltdown. This mechanical failures was compounded by the failure of those monitoring the systems to recognize the situation as a loss of coolant accident. That was awful. And it “could” happen again, although the fail-safe mechanisms that are built in to the newer designs – many as a result of what happened at TMI – make it a far more remote possibility. While anything “could” happen, I don’t much concern myself with the likelihood that a fragment of a meteor will strike me in my home, and I imagine you don’t either — although, as with atomic energy, there are scientists and engineers who do concern themselves with such things on our behalf. And I would rather eat French beef grazing on the grass outside a nuclear power plant than US beef spending their life in some 4’ x 7’ cage while being pumped up with steroids, antibiotics and chemicals to make them fat!

Life is about making common-sense decisions after evaluating all the facts. I do not mitigate for a moment that TMI was both a mechanical and human screw-up, but nor do I dwell on it. If I were a nuclear engineer, I would want to learn everything I could from this incident and design the Next Gen plants quite differently. (Of course, that is exactly what the real nuclear engineers have done.)

For the record, the Kemeny Commission Report, and a score of others, are available online. The official radiation emission figures clearly show that “the average radiation dose to people living within ten miles of the plant was eight millirem and no more than 100 millirem to any single individual. Eight millirem is about equal to a chest X-ray and 100 millirem is about a third of the average background level of radiation received by US residents in [one] year.” Those who remember it differently are remembering a (very good!) fictional movie that came out earlier in 1979, The China Syndrome, not the actual Three Mile Island experience.

I won’t dignify Chernobyl with a rebuttal. No responsible nation would consider building that model reactor, even back then. The dying Soviet regime cut corners everywhere, went for the cheapest rather than the best, trained their plant personnel poorly, and were too slow to respond with a crisis action team. Chernobyl was a one-off event that would not occur with today’s technology and safeguards.

You may disagree with the above. But if you believe the world has greater and greater difficulty (and expense) finding new sources of oil and natural gas, that we might want to lessen our reliance on coal for environmental reasons, and that wind, solar, and biomass will provide only incremental gains in energy generation that will not by themselves keep up with the rate of population growth and energy usage, you might want to consider an investment in the atomic energy business.

I believe the smartest way to do so is with the miners and producers of uranium (though there are many advocates for thorium on this site and elsewhere – and I’m certainly willing to consider that source as long as the companies commissioning the plants and those building the plants do so. For now, however, the current 104 US plants, and the rest around the world, use uranium as their base fuel.) I’ll discuss some of these firms in a follow-on article.

Today, rather than discuss individual companies, let me first mention the four ETFs that invest in uranium miners and producers as well as the electric utilities that use atomic energy, the design and consulting firms that conceive of them, the fabricators that build them, and all the other firms that provide support to the industry.

Market Vectors Nuclear Energy ETF (NYSE:NLR) seeks to replicate the price and yield performance of the DAXglobal Nuclear Energy Index. This index is a modified market capitalization-weighted index consisting of publicly traded companies worldwide that are engaged in all aspects of the nuclear energy business with market cap exceeding $150 million and have worldwide average trading volume of at least $1 million daily over the past six months. The Index includes seven major sub-sectors, including mining, enrichment, storage, equipment, plant infrastructure, fuel transport and energy generation. There are some big names here like Exelon (NYSE:EXC), Entergy (NYSE:ETR), and Constellation Energy (NYSE:CEG), but also some smaller names like Fronteer Gold (NYSE:FRG) and USEC (NYSE:USU).

iShares S&P Global Nuclear Energy Index (NYSE:NUCL) concentrates most of its holdings in Japan and the US, a different approach but, given the technological expertise residing in those two nations, perhaps a very worthwhile one.

The most recent ETF – coming to market just this month — is the most concentrated uranium-themed ETF, GlobalX Uranium (NYSE:URA) Global X Uranium says it will seek to capitalize on demand for uranium via the publicly-traded shares in leading miners. URA currently holds 23 companies, more than 75% located in three nations with the best combination of corporate governance and security: Canada, Australia and the US. Their largest holdings include Cameco (NYSE:CCJ), Uranium One (UUU on the TSE) and Paladin (PDN on the TSE).

The case for atomic energy generation is a clear one, albeit not without detractors. Honest men can disagree and remain honest men, but regular readers know my personal belief is that it is short-sighted, in an energy-starved world-to-be, to eschew any source of energy. That includes wind, solar, geothermal, run-of-river and traditional hydroelectric, oil, natural gas, coal – and nuclear.

Fossil fuels will become more expensive if / as they become more scarce. Renewable energy alone simply can’t handle the massive demand that is forthcoming from a burgeoning world population. There’s a new generation worldwide that want to have running water and electricity and are willing to use all sources available to get it. Since markets anticipate demand, this may be a good time to begin your own due diligence into all the issues surrounding atomic energy, a “nearly renewable” energy.

Author’s Disclosure: We and/or those clients for whom it is appropriate are now long URA, NRL, EX, CCJ, UUU, as well as other select uranium producers, which I’ll discuss in a future article.