In recent day and weeks, I have slowly moved to the starboard side of the “Vessel of Public Opinion” where most seasoned veterans (aka “old guys”) usually wind up; that is to say that I am now officially “cynical” when it comes to the world of investing. Residing in cynicism usually has a few distinct advantages with one being the uncanny ability to have your “bullsh*t meter” on at all times while one glaring disadvantage is that you miss opportunities you might have taken when you were young(er) and eternally optimistic.

By example, I draw your attention to October 16, 1962, back to a time when the world stood on pins and needles as the two main nuclear superpowers came perilously close to a military engagement. Known as the Cuban Missile Crisis, for those of you who are too young or too ill-read or educated to know this, it was a twelve-day period that felt like months as President Kennedy stared across the green felt of the thermonuclear poker table at Soviet Premier Khrushchev and awaited that “blink” that would and could avert what many thought was going to be “The Big One.” I was nine years old and about to graduate from “House League” hockey in Malton, Ontario, to the “MTHL” when while driving to one of the bi-weekly games all over the Great Toronto Area I asked my father: “Dad, if the Americans and the Russians go to war, will that be the end of the world?”

The response I got back from him was one which I have remembered and carried all through my life and is one which illustrates a bias of hubris carried by our species throughout history. “Son,” he said, “first of all, the Yanks and the Russkis are too afraid to go to war because they know that there will be no winner and the secondly, even if there IS a war, the “WORLD” is never going to end. Mankind might get wiped off the face of the planet and a lot of animal and plant life with it but the planet will continue to adapt and adjust and it will still be alive long after man has departed.” 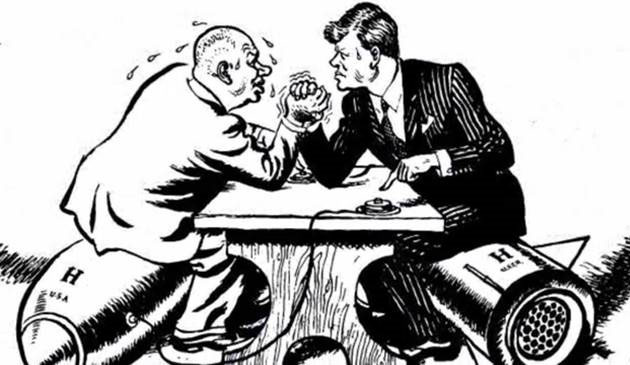 That answer dovetails beautifully into my newly found cynicism because of its ability to bypass the “GAN” (“generally accepted narrative”) and addresses the biases that in today’s day and age have become engrained into one’s thinking and resultant behaviors. To wander through history believing that mankind is the ultimate determinant of life on earth is about has scientifically egotistical as it gets. It presumes that no matter what actions are taken to prevent global self-annihilation, mankind alone carries the power to alter the course.

Applying this to the current investment climate in 2017, I can imagine a kinder, gentler space before government interventions, before central bank purchases, before the Working Group on Capital Markets or the London Gold Pool or even the South Seas Bubble. I can picture a time before supercomputers and algorithms or Bitcoin when wealth was measured in farmland and horses and gold where governments were absent from the movement of goods and services and where capital gravitated to businesses deemed most efficient by virtue of free cash flow and profitability.

Like the U.S. Constitution or the Canadian BNA Act of 1867, it is the raw simplicity of the document that allows it to stand apart from tampering, insulated from the self-interests of those that would change its content. Similarly, this is where I find myself here in the summer of 2017. Instead of a freckle-faced kid asking about the likelihood of thermonuclear annihilation in 1962, there is a new question arising which is “Dad, what happens when the Federal Reserve and the European Central Bank and the Bank of Japan move to “normalize” their balance sheets?” Would it be that I could answer in the frame and tone of the man that answered MY question 55 years ago, the answer would be this:

“Son, first, the global central banks are NOT going to normalize their balance sheets because they know that to do so would mean sharply higher interest rates and the bubbles they have created since 1980 would all simultaneously POP and, second, to “normalize” their balance sheet means SELLING ALL OF THE SECURITIES THEY BOUGHT BETWEEN 2009 and TODAY and that is impossible for one reason—THERE IS NO ONE TO SELL THEM TO.”

The problem with making investment decisions using the GAN as gospel is that unless it fits within your pre-ordained investment thesis, you are anchored in a trap of misinformation and faulty assumptions. To wit, the Western investment community has now gotten to the stage where gold and silver have been completely invalidated as safe haven asset classes, having been replaced by stocks and ETFs and more recently, cryptocurrencies like Bitcoin. Through intervention and message management by way of a conflicted financial media and compromised regulatory regimes, gold and silver in the minds and actions of today’s Millennial money managers are no longer seen as legitimate stores of value because the GAN has enforced that message. However, just as the world is not going to “end” as the result of a thermonuclear war, gold and silver are not going to “end” as a result of a historically short period of dislocation of their roles as stores of value. Determining the series of events that will inevitably and conclusively reassert the safe haven status of our global society’s only true form of real money remains illusive but the certainty of outcome is, at least for me, not up for debate.

So when I listen to all of these young snapperheads on CNBC Power Lunch or Fast Break discussing Facebook or Tesla or Amazon and have targets set for the S&P 10, 15, 35 percent higher than today’s levels with nary a mention of gold and silver as alternative portfolio options, I am reminded of the days of October 16-28, 1962, and all I can do is think to myself how the GAN back then was so completely wrong both by way of the logic of building bomb shelters and in the logic of assuming one would want to actually live in a post-nuclear-war world. Analogously, to assume that the global central banks are going to “normalize” is a faulty assumption; to assume that stocks will climb “forever” because the central banks “have our backs” is too a faulty assumption; and to assume that gold and silver will never again assume their 5,000-year roles as “real money” is the most faulty of all GAN-led assumptions.

With that in mind, the sentiment out there is really in the tank and that, rather than “turning to the charts!” as the vast majority of armchair “analysts” would say, I prefer to ignore the charts and instead focus on sentiment and the RSI. As I pointed out in the last missive entitled “One Massive, Global, Serial Bubble“, the near-term price performance has recently seen higher highs and higher lows for gold and for the Gold Miners as represented by the GDXJ (VanEck Vectors Junior Gold Miners ETF) and its 3x’s-leveraged baby brother, the JNUG (Direxion Daily Junior Gold Miners Bull 3X ETF). As of 1:16 p.m. here at the end of the week, I have added 75% positions in the USLV (VelocityShares 3X Long Silver ETN) averaging $11.93 and 50% of the JNUG averaging $19.01. I intend to move to 100% positions in the USLV by the close and will probably move to a 50% margin position by early next week while simply topping up the JNUG quite possibly by the bell as well. (As I tweeted this morning shortly after announcing these moves “Amazing what four double Espressos and three ounces of Wild Turkey will make you do at 9:30 in the morning.”) 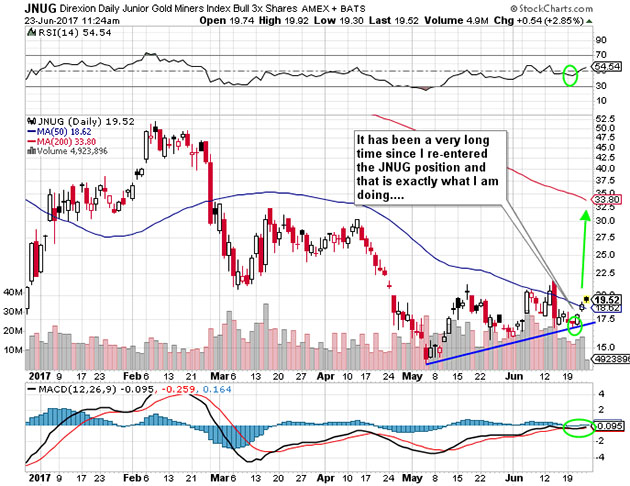 It took me the better part of five days to lure Fido out from under the tool shed after going off on one of my classic rampages where things get thrown, people get screamed at, television sets get assaulted and feelings get SERIOUSLY hurt. Sadly, I have been going to counseling for the better part of four years where my therapist is constantly prodding and pushing and pounding on me to “handle my emotions” such that I don’t “traumatize those around me,” so I nod and I smile and I generally embrace the idea of “modified behaviors” when all I really want to do is grab some banker by the throat and choke him.

Now, call me “unstable” or call me “out of line” or call me “seriously-bat-dangling-from-the-roof-of-the-cave” crazy, but writing about these gold market interventions such as I did in early June is actually an extremely taxing endeavor. Since the Great Financial Bailout of 2009, where U.S. taxpayers received hydrofluoric acid enemas while bankers rejoiced at the survival of their completely corrupt and compromised political and financial system, we the investing public are fed a debilitating diet of mainstream media slop with the “everything is awesome” meme a constant serving.

As a true devotee of SOUND MONEY PRINCIPLES and a lifelong believer in the value of gold and silver as generational stores of value, to have a graduate of some liberal arts university tell me to keep my emotions “in check” while criminal interventionalists reach into my children’s trust funds and steal their money is, shall we say, somewhat “disingenuous.” More to the point, that bullion bank traders are allowed and, in fact, encouraged to interfere in the precious metals markets is no different than allowing dogs like mine to roam through inner-city parks, taking large, violent chunks of flesh out of anything alive and moving. Offended? Good. Try watching bullion bank traders taking similarly large chunks of after-tax dollars from the accounts of millions of precious metals investors with not even the slightest of protest. Now, Fido is once again asleep at my feet after a two-day, $20/ounce rally in gold once again cementing the 100% inverse-correlation between bankster shenanigans and canine adoration.

JNUG currently has an ETF Daily News SMART Grade of F (Strong Sell), and is ranked #9 of 24 ETFs in the Leveraged Commodities ETFs category.