EconMatters: When there is Corn planted behind gas stations in makeshift lots: After the last weather disturbance in 2008, I remember traveling for my company in the Northeast, and I visited several states that were not known for being corn belts, the biggest impression besides the business takeaways, was how much corn was being planted anywhere and everywhere. There was corn planted in makeshift small lots, open fields, small farms, and bigger farms.

In a nutshell, there was corn everywhere, and when I got back from my trip it dawned upon me that the corn market was potentially a big short, and my suspicions were proven correct as the corn market dropped like a rock from $8.50 a bushel all the way down to $3 a bushel in late 2008. Now a lot of that drop reflected the capital withdrawal from markets due to the financial crisis. 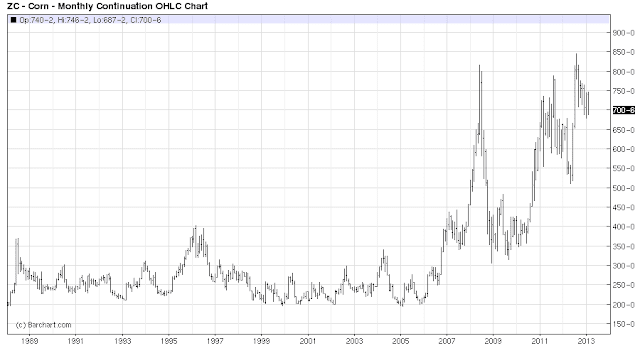 However, a lot of the continued weakness was the result of high prices due to the crop shortages incentivizing crop rotation to the more profitable corn commodity, and economics taking care of the rest with greater supply coming to markets creating downward pressure in prices. Plus there was some reversion to the mean average going on as well in the commodity.

Prices remained relatively muted for two years trading between $3 and $4.50 a bushel before a breakout late in 2010 where we ultimately tested the $8 a bushel level in September of 2011. Prices drifted down to test $5 a bushel in June of 2012 before skyrocketing higher on drought concerns to $8.50 a bushel in August of 2012. 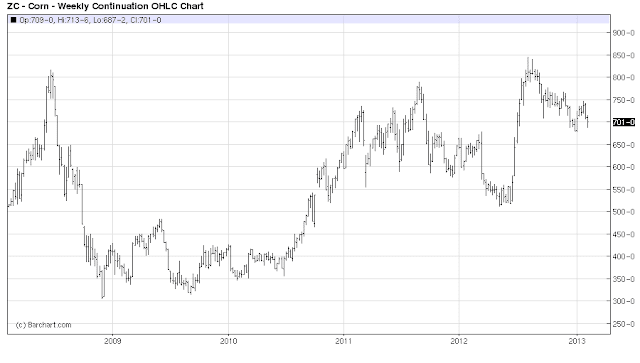 Since then a defined down trending channel is forming and every spike in prices is met with resistance, and price fails to gain any momentum to the upside. Corn isn`t exactly a major staple in people`s diets these days, and is mainly used as a feedstock for cattle and other livestock. 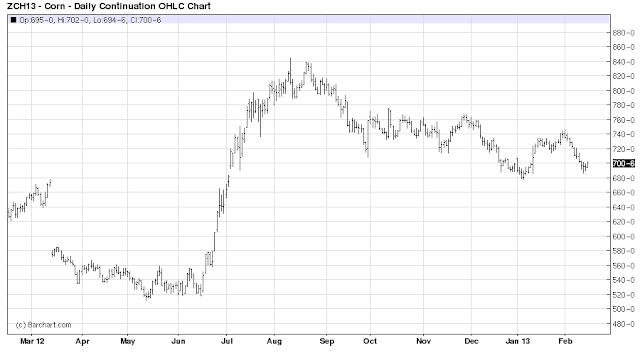 From a technical standpoint the corm contract appears to be trading relatively weak and if it breaks the $6.75 a bushel support area traders will jump on the downside momentum and test the $6 area of next major support in the commodity. The crop reports, weather and overall market sentiment will determine price movement from there but a trade down to test the $6 a bushel level in corn seems like it is in the trading cards. 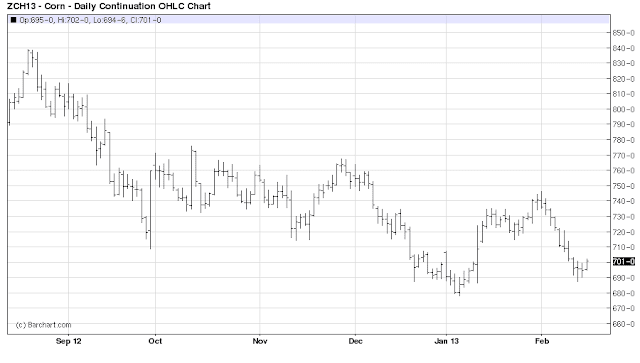 Pay attention to the technicals, and remain on the trending side of the trade. Look for pullbacks within the trend to establish a position with strategic stops where the trade is invalidated and you should live to fight another day if you are wrong.

But commodities trend a lot in channels, and the big players determine the trend, and you want to be on the side the big money is playing. They set the rules, and it will do you no good to fight the trend from a capital preservation standpoint.

You in essence are piggybacking on their trade, they will do all the work, and you just pay attention on where to move your stop up to stay involved in the trade for the bulk of the move.