I often remind investors to look past the negative and find the positive. Last week provided no shortage of big splashy headline stories, from yet another high-profile personnel shakeup at the White House to a nail-biter special election in Pennsylvania’s 18th Congressional District, from Russia’s alleged nerve agent attack on a former double-agent spy to a tragic bridge collapse in Miami.

If this is all you were focused on, you might have missed what I believe was the most significant development of the past few days. Last Wednesday, the Senate, in a bipartisan vote, quietly approved plans to roll back key banking rules in 2010’s Dodd-Frank Wall Street Reform and Consumer Protection Act (Dodd-Frank).

If the House also approves the bill, President Donald Trump is expected to sign it into law, thereby providing much-needed relief to smaller lenders and community banks that millions of rural Americans and small businesses depend on. Aside from tax reform, I think the relaxation of Dodd-Frank will be seen as Trump’s crowning fiscal achievement so far, as it has the potential to contribute greatly toward his goal of at least 3 percent economic growth.

Investors piled into an ETF that holds small to midsize banks following the news last week. The SPDR S&P Regional Banking ETF attracted $606 million in daily inflows, a record for the fund, according to Bloomberg.

The most sweeping and complex financial reform package since the Great Depression, Dodd-Frank was drafted in response to the financial crisis–yet few believe it would do much in the way of preventing another such crisis. Last year, the Treasury Department declared that the law, despite its ambitious scale and scope, has “failed to address many drivers of the financial crisis, while adding new regulatory burdens.” As such, the agency recommended a number of changes, including improving efficiency and decreasing unnecessary complexity.

Among the likely changes to Dodd-Frank: raising the threshold for tougher oversight from the current $50 billion in assets to $250 billion; exempting small banks from the so-called Volcker rule, which currently bars them from speculative trading; reducing the amount of financial reporting, particularly racial and income data on mortgage holders; lowering the frequency of regulatory exams; and easing the conditions of stress tests.

Community Banks Are Vital to the U.S. Economy

The cumulative effect of the rollback will be to lower compliance costs and allow banks to better service clients and shareholders alike. I can’t stress enough how important this is. Small community banks–those with under $10 billion in assets–are tremendously vital to the U.S. economy. According to the American Enterprise Institute (AEI), they provide a substantial percentage of lending to U.S. farms–about 44 percent. Nearly half of all small business loans in the U.S., and more than 15 percent of all residential mortgages, are issued by small banks.

Last year, I included Dodd-Frank in a list of the five costliest financial regulations of the past 20 years. Since 2010, the legislation has undeniably had a negative effect on the banking industry, driving dozens of institutions to ruin and giving borrowers far fewer options. Between the year of its signing and 2014, the U.S. lost more than 14 percent of its small community banks, while the number of large banks rose 6.3 percent, according to the Mercatus Center at George Mason University.

Dodd-Frank Falling out of Favor

Support for Dodd-Frank is waning more and more. Both former Federal Reserve chair Alan Greenspan and billionaire investor Warren Buffett have come out strongly against it, with Greenspan saying he’d love to see the 2010 law “disappear.” For his part, Buffett believes that, as a result of the law, the U.S. is less well equipped to handle another financial crisis, as Dodd-Frank stripped the Fed of its ability to act.

Case in point: When now-defunct investment bank Bear Stearns was headed for failure 10 years ago this week, the Fed arranged an emergency loan of nearly $13 billion routed through JPMorgan. It also agreed to purchase $30 billion in Bear assets. But now, because of Dodd-Frank, such assistance is illegal since the law stipulates Fed lending must be broad-based and not directed toward a single institution. Possibly the most telling sign that the 2010 law is losing favor among proponents is that Barney Frank himself, the former chairman of the House Financial Services Committee and one of Dodd-Frank’s chief architects, recently acknowledged he “sees areas where the law could be eased,” according to the Financial Times.

Speaking at this month’s annual Futures Industry Association meeting in Boca Raton, Florida, Frank said he “supports regulating banks differently based on their size” and sees the need to make it “easier for smaller banks to make loans such as mortgages.”

If you recall, lending procedures became so restrictive following Dodd-Frank that Ben Bernanke himself, Fed chair from 2006 to 2014, had trouble refinancing his home.

“I think it’s entirely possible [lenders] may have gone a little bit too far on mortgage credit conditions,” Bernanke remarked during a 2014 conference on housing.

More recently, President Trump claimed he had friends with “nice businesses” who couldn’t borrow money because of Dodd-Frank.

The easing of banking restrictions is just the latest in Trump’s ongoing effort to cut red tape that has stymied economic growth and disrupted the creation of capital. For many voters, his pledge to push for deregulation tops the list of reasons why he was elected, and I’m happy to see that he’s making good on this promise.

10 Years Since the Demise of Bear Stearns

The Senate’s approval to weaken Dodd-Frank came, appropriately enough, on the 10-year anniversary of Bear Stearns’ stunning collapse. The once-powerful institution–in 2007 it was the fifth largest U.S. bank, with $400 billion in assets–was among the earliest warning signs of a broad economic meltdown that would ultimately result in the stock market losing nearly half its value. Below is just a sampling of headlines from 10 years ago last week: 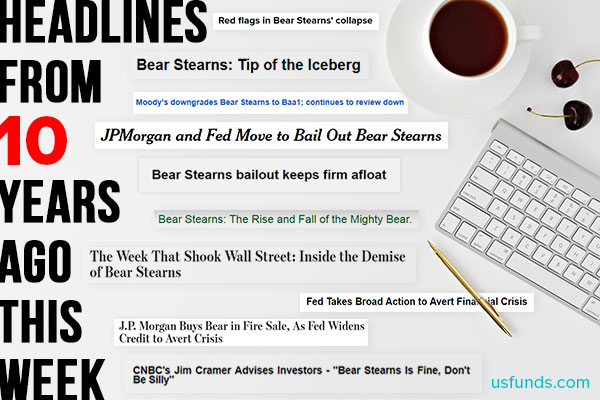 As you’re no doubt aware, Bear Stearns’ demise was fueled primarily by excessive leveraging and overweight exposure to junk mortgage-backed securities. In an attempt to prevent the pathogen from spreading further, the Fed, as I mentioned earlier, brokered a deal for financial giant JPMorgan to buy Bear for as little as $2 a share.

So what lessons can we take away from Bear? Countless articles and thought pieces have been written on this topic over the years, including an excellent one by Justin Baer and Ryan Tracy that appeared last week in the Wall Street Journal.

Two lessons in particular stand out to me.

One, Bear showed us the painful consequences of failing to diversify. The bank had historically been known for its aggressive and risky investment strategies, but it was finally done in by its heavily concentrated position in bad mortgages. According to an analysis by former Lehman CFO Erin Callan,mortgage-backed securities accounted for a whopping 71 percent of Bear’s Level 3 assets–defined as those that are hard to value.

“Our liquidity position in the last 24 hours had significantly deteriorated,” announced Bear Stearns CEO Alan Schwartz, explaining to shareholders why he had no other choice than to accept an emergency bailout.

This is one of the many reasons why I recommend a 10 percent weighting in gold, one of the most liquid assets in the world. With 5 percent in gold bullion and 5 percent in gold mining stocks, along with an annual rebalancing, investors could potentially offset their losses in other holdings.

The second takeaway I’d like to point out is to focus on well-managed companies with healthy balance sheets. Near the end of its life, Bear Stearns was leveraged about 36-to-1, according to some estimates. For most firms, this is unsustainable.

Unfortunately, corporate debt relative to U.S. GDP has now returned to prerecession levels, a risk made even riskier by rising interest rates. U.S. household debt, meanwhile, hit a new high of $13.15 trillion in the final quarter of 2017.

It’s for this reason that, when evaluating gold mining firms, we prefer those that do not rely primarily on debt to finance their operations. This recipe doesn’t always guarantee success, but should another financial meltdown occur, such companies will be in a much better position, financially, to weather the storm.

To learn more about what we look for in mining firms, click here!

Diversification does not protect an investor from market risks and does not assure a profit.

The SPDR KBW Regional Banking ETF (KRE) was unchanged in premarket trading Tuesday. Year-to-date, KRE has gained 7.88%, versus a 1.36% rise in the benchmark S&P 500 index during the same period.

KRE currently has an ETF Daily News SMART Grade of A (Strong Buy), and is ranked #3 of 36 ETFs in the Financial Equities ETFs category.