Keith Fitz-Gerald: Last Monday, I shared a chart with my readers and suggested they may want to batten down the hatches because I saw a 30- to 40-point drop happening by the end of the week.

Now I want to share that same chart with you plus a new one – and encourage you to do the same thing.

The shellacking the markets took last Thursday is the most powerful warning sign we’ve seen yet that things are not what they seem in the financial markets. For lack of a better term, it’s a bearish omen, despite Monday’s recovery.

Today I want to talk about what that means for your money and what you can do about it in the name of protecting your money and, more importantly, the pursuit of profits.

Contrary to what you might believe, not all bears are bad news.

Let’s start with the chart….

I find the old adage that a picture is worth a thousand words is really true, especially when you look carefully at market charts over widely disparate time frames. That’s because you can easily see similarities that are otherwise not apparent.

This helps you prepare ahead of time for contingencies that others will not see until it’s too late.

For example, many people have convinced themselves that things are different today in our post-financial crisis world. They cite everything from the “brave new world” we live in to the “rapidly changing technology” and even the Fed’s “innovative financial policies” as rationale. Things, they say, are different this time.

So why is it that today’s bull market is eerily similar to another famous bull market? And why are traders worried that we’ll have a repeat of Black Monday in 1987 a month from now?

Even if investors don’t recall the data, they recall the angst from Black Monday 27 years ago.

Psychologists say this is because of the way the amygdala works. That’s the part of the brain that activates in response to emotionally charged circumstances, especially those that provoke fear.

I think it’s simply the collective knowledge of one generation being passed involuntarily to the next as part of a critical survival instinct, which is why even those who were not investing then feel the fear now.

To draw a parallel, saber-toothed tigers haven’t existed for more than 12,000 years. Yet, the thought of them prowling around still causes an involuntary reaction, not to mention a totally irrational “grab-your-spear-and-run-for-the-cave” reaction in most people.

The bull market that started in March 2009 is now up 169% through Friday. That’s nearly step for step with the rally that began in 1982 and immediately before the biggest single-day drop in market history on Oct. 19, 1987 – a day we now refer to as “Black Monday.” 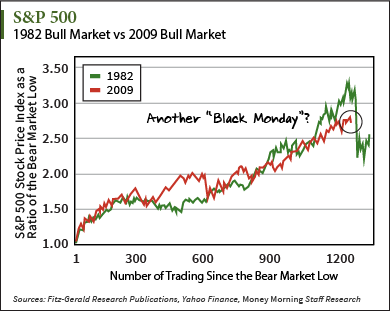 Many technicians, myself included, are concerned that we could have a repeat 30 days from now.