John Townsend:  With Ben Bernanke’s public speech from Jackson Hole last Friday somewhat behind us, perhaps this post can provide some food for thought regarding the immediate direction of the dollar, gold and the miners.

My take on market reaction to Ben’s speech was that a predictable immediate sell off would be very short term when QE3 was not announced and lead to a more significant rally. Indeed, this is exactly what happened, with gold closing higher for the day 3.16%, the HUI gold bugs miners index up 2.53% and the S&P 500 up 1.51%.

The headlines seem to suggest that traders became relieved that QE3 – or something like it – is still on the table for the Federal Reserve’s next meeting in September. And unless that perception changes for very long, my hunch is this provides the perfect ‘excuse’ for gold and the stock markets to rally further.

We’ll look at some charts today and begin with a long term (20 year) look at the US Dollar index with an eye to identify both gold’s secular bull market C-wave tops and the 3 year cycle lows of the dollar.

Gold’s secular bull market began on April 1, 2001. The C-wave tops are identified with a green arrow and the exact date. The early 2004 C-wave was a double top, which explains why I have two green arrows at that location. The last definitive C-wave top was in 2008 on March 17.

I have identified the 3 year cycle lows on this monthly chart of the US Dollar index with an orange arrow – just above price and in the lower True Strength Index (TSI) indicator panel. If you look carefully you will notice that not a single 3 year cycle was exactly 3 years. Indeed, a couple of the earlier cycles were just a shade short of 3 years. And, the longest cycle so far (1995 – 1998) was 42 months (3.5 years). Our current cycle, assuming it has not bottomed, is on month 41.

The weight of this evidence suggests that our current 3 year cycle low is not likely to be much further in the future. And, this suggests that a top in both the gold and stock markets is not much further ahead, either. A period of deflation – where assets fall in value as they are sold to raise cash and pay creditors – will be the fuel that powers a rise in the dollar from its 3 year cycle low.

The TSI indicator did an excellent job of pin pointing nearly every 3 year cycle low. The only exception was the 1995 cycle low. Here, the TSI did finally get it right when it identified the final low with a positive divergence BUY signal. Our currently anticipated cycle low will likely be identified in the same manner. Namely, a marginal new low in the short term will likely not make a lower low on the TSI reading – thus a positive divergence.

The final takeaway from this chart is to note that C-waves top at the conclusion of a sharp fall in the US Dollar index. The exception here is the first C-wave of 2003. The idea for today is that if the dollar has not made its final low, neither has this C-wave.

Should traders continue to find the excuse that QE3 is still on the table, the dollar may indeed continue to slip lower giving gold and the stock markets the encouragement needed to rally. 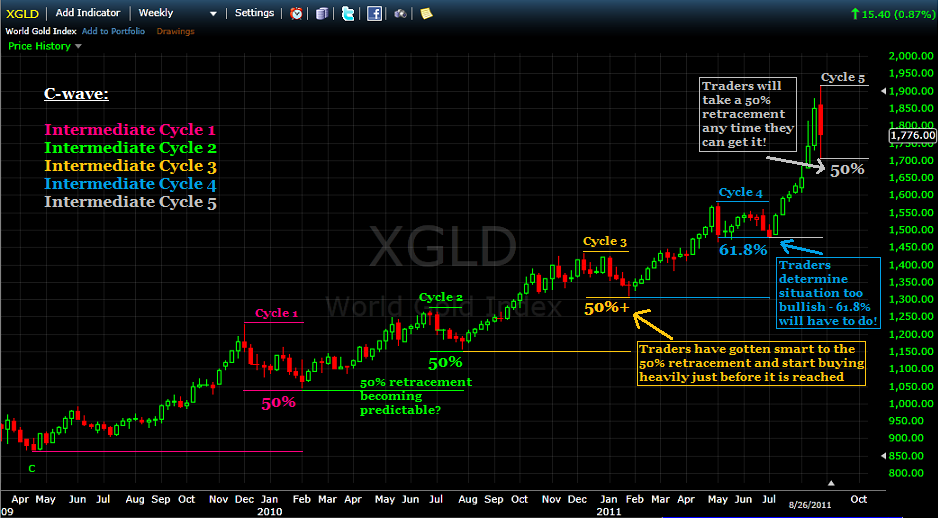 I found it interesting to notice that the first and second intermediate cycle retraced exactly 50% of the distance measured from that cycle’s trough (beginning) and peak (highest price). The third intermediate cycle looked like it too would retrace 50% but I guess the trick became too predictable – traders obviously starting buying en masse before price reached the 50% level and thus it never quite made it to 50%.

The fourth intermediate cycle only retraced to the Fibonacci 61.8% level. Apparently traders decided that gold was simply too bullish to play the 50% game again, and that 61.8% was ‘good enough’.

Our current cycle is the fifth. I find it troublesome that it has already made a 50% retracement of it’s high. I view this a serious breech of the pattern of gold’s intermediate cycle strengthening as it has progressed. In other words, this is a parabolic wave that is no longer parabolic. Secondly, it is of little comfort that the peak and significant retracement has happened so early in the intermediate cycle – on just week 8. 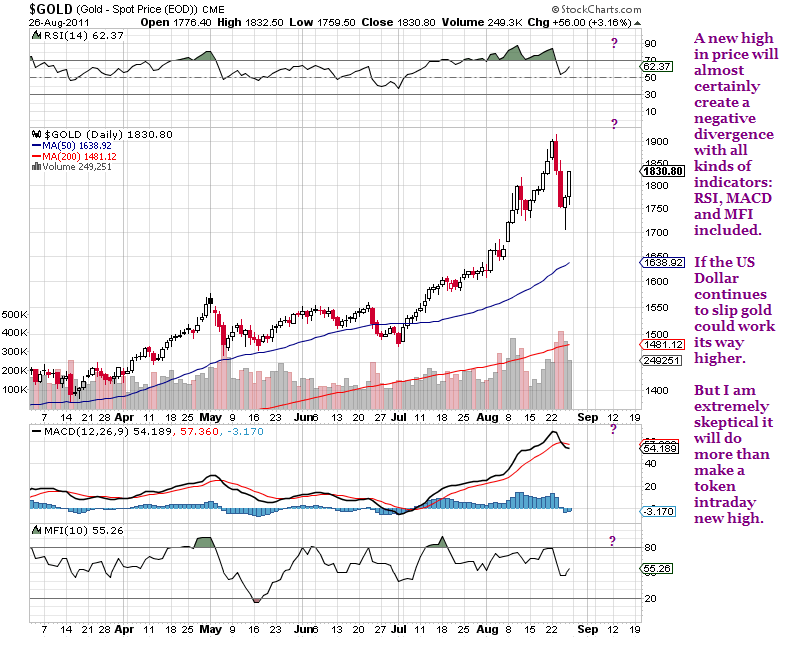 OK, let’s take a look at gold from a different vantage point. We’ll use the daily chart this time and throw a few of the ‘mainstream’ indicators on the chart, as well.

What I see here is not too comforting either. RSI, MACD and MFI appear impossibly positioned to confirm a new high price in gold, should gold make a new high, that is. 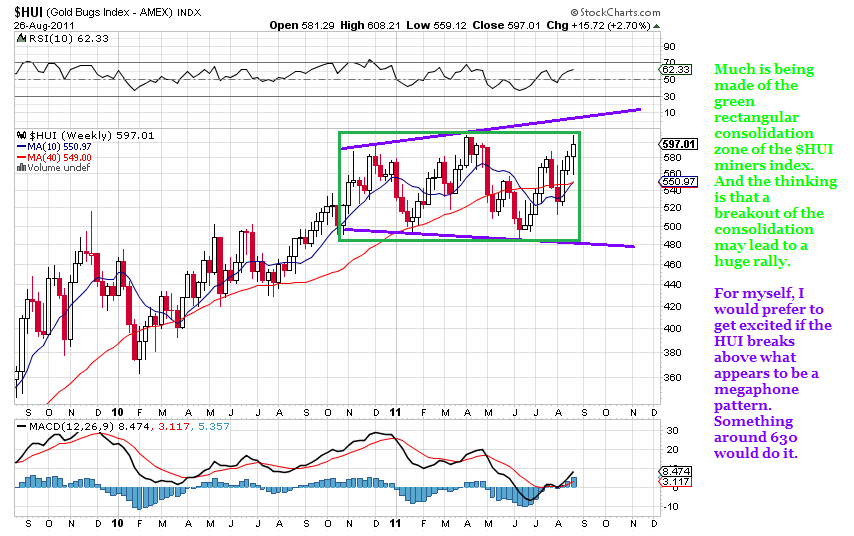 I’ll conclude the chart show and tell with a couple of weekly peeks at the HUI – Amex Gold Miners index.

This first chart illustrates the dual chart pattern dynamics I believe are in play. First, you have the obvious rectangular shape of the large price consolidation. And second, you have the less obvious megaphone pattern which suggests a breakout of the first pattern does not necessarily guarantee that the miners are free to fly. 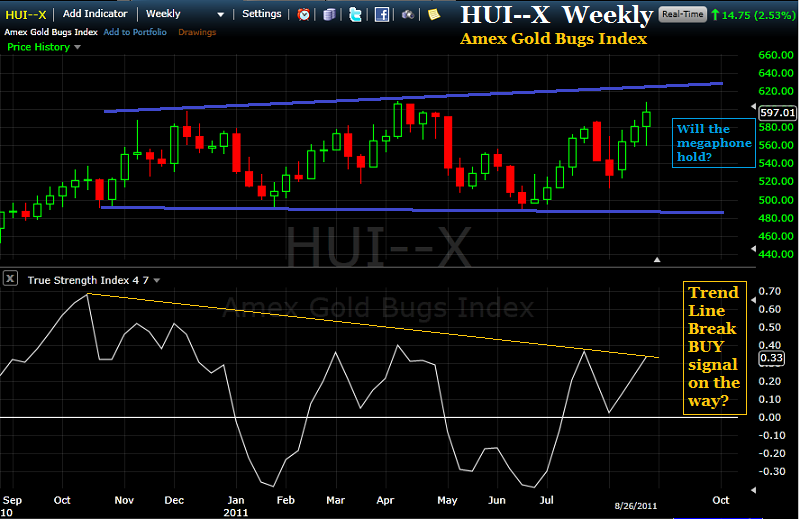 This second chart of the mining index has the megaphone outlined on price, but additionally considers the TSI status.

I’m not from Missouri. Actually, I am from California. But I feel a little kindred with the nice people of Missouri at the moment. Their license plates read, ‘The Show Me State’. And for now that sentiment is exactly what I think about the miners. Show me. Let’s see the TSI breakout and the megaphone breakout first, then I will get excited.