The Hourly View for VIAC

At the moment, VIAC’s price is up $0.31 (0.39%) from the hour prior. This is a reversal of the price action on the previous hour, in which price moved down. If you’re a trend trader, consider that the strongest clear trend on the hourly chart exists on the 20 hour timeframe. The moving averages on the hourly timeframe suggest a bullishness in price, as the 20, 50, 100 and 200 are all in a bullish alignment — meaning the shorter durations are above the longer duration averages, implying a sound upward trend.

At the moment, VIAC’s price is down $-4.21 (-5.03%) from the day prior. VIAC has seen its price go up 8 out of the past 10 days, thus creating some compelling opportunities for bulls. As for the trend on the daily timeframe, we see the clearest trend on the 100 day timeframe. The moving averages on the daily timeframe suggest a bullishness in price, as the 20, 50, 100 and 200 are all in a bullish alignment — meaning the shorter durations are above the longer duration averages, implying a sound upward trend. The chart below shows VIAC’s price action over the past 90 days. 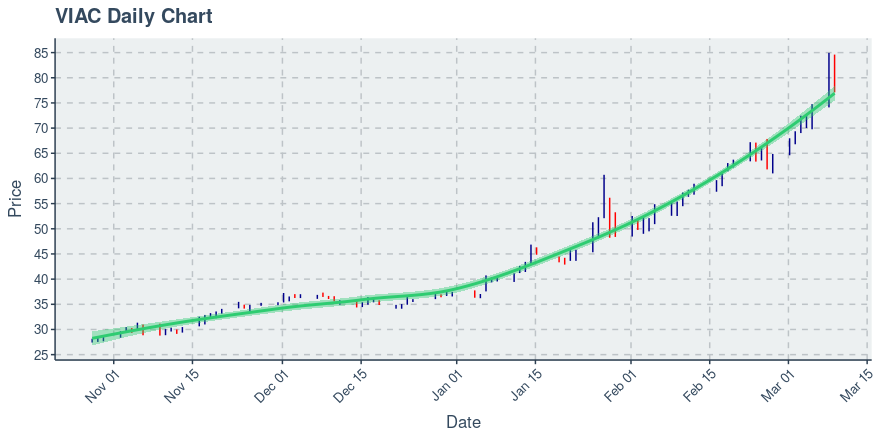 News traders keeping an eye on VIAC may find value in this recent story:

Did CBS Pay Oprah Winfrey Up To $9M For Prince Harry And Meghan Markle Interview?

Although the Duke and Duchess of Sussex, a.k.a. Prince Harry and Meghan Markle, did not receive financial compensation for their confessional interview with Oprah Winfrey, ViacomCBS (NASDAQ: VIACA) reportedly paid the talk show doyenne between $7 million and $9 million for the licensing fee for the two-hour production. What Happened: A Wall Street Journal article sourcing unnamed “people familiar with the pact,” stated CBS was also charging about $325,000 per 30 seconds to commercial advertisers who sought to be included in the program, a sum that is approximately twice the regular price of ad time during the Sunday night primetime programming bloc. An average of 17.1 million viewers watched the telecast, according to Nielsen. Although Winfrey has ties to CBS — she was briefly part of the “60 Minutes” on-air team and has a high-publicized “BFF” relationship with morning news host Gayle King — the unnamed sources also claimed Winfrey’s Harpo Productions pitched the interview to Comcast Corporation’s (NASDAQ: CMCSA) NBC and the Walt Disney Co.’s (NYSE: DIS) ABC. Was It Worth The Money? The interview, which included bombshell claims by Markle that racism and mental cruelty from within the royal family and palace administration drove her to consider suicide, created a sensation across traditional and social media. The interview will air this evening in Great Britain on ITV plc (LON: ITV). The Sussexes have withdrawn as working members of the royal family and resettled in Montecito, California, where they signed production deals to produce documentaries with Netflix Inc. (NASDAQ: NFLX) and podcasts with Spotify Technology SA (NYSE: SPOT). During the interview, Prince Harry stated the couple signed those deals after they were cut off financially from the royal family and required funds to pay for the security detail that was withdrawn by the palace after the couple left Great Britain in January 2020 to briefly take up residence in Canada. (Photo: Mark Jones, Wikimedia Commons) See more from BenzingaClick here for options trades from BenzingaWhy Paramount Moving ‘A Quiet Place Part II’ To Memorial Day Weekend Is A Big DealComic-Con Cancels For Second Straight Year, Plans Smaller Show For November© 2021 Benzinga.com. Benzinga does not provide investment advice. All rights reserved.