One of the epicenters of the global financial crisis that started during the second half of last year is Japan, and it looks like the markets in the land of the rising sun are entering yet another period of great turmoil.

The Nikkei was down another 390 points last night, and it is now down more than 1,300 points since a week ago.

Why this is so important for U.S. investors is because the Nikkei is often an early warning indicator of where the rest of the global markets are heading.

So the fact that the Nikkei has been falling very rapidly in recent days should be a huge red flag for investors in this country. 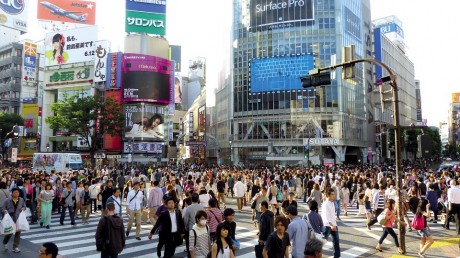 I want you to study the chart below very carefully.  It shows the performance of the Nikkei over the past 12 months.  As you can see, it kind of resembles a giant leaning “W”. 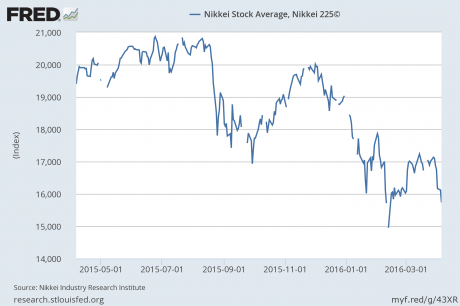 And of course the economic fundamentals in Japan continue to deteriorate as well.  GDP growth has been negative for two out of the last three quarters, Japanese industrial production just experienced the largest one month decline that we have seen since the tsunami of 2011, and business sentiment has sunk to a three year low.

The third largest economy on the entire planet is in a comatose state at this point, and Japanese authorities have been throwing everything but the kitchen sink at it in an attempt to revive it.  Government stimulus programs have pushed the debt to GDP ratio to 229 percent, and the quantitative easing that the Bank of Japan has been engaged in has made the Federal Reserve look timid by comparison.

But none of those extraordinary measures has been successful in stimulating the Japanese economy, so now the Bank of Japan has been been trying negative interest rates.  Unfortunately, these negative rates are also having some unintended consequences.  According to the Wall Street Journal, the negative interest rate program is putting additional stress on the Japanese financial sector…

The Bank of Japan started imposing a minus 0.1% rate on some deposits held by commercial banks in February, meaning that those banks now have to pay a small fee when they add to their money parked at the central bank. The financial sector has suffered amid worries that banks can’t pass on negative interest rate to their depositors and therefore will take a hit to their profits.

I would keep a very close eye on the big banks in Japan.  It is my conviction that there is a lot more brewing under the surface than we are being told about so far.

In addition, many analysts in Japan are complaining that all of this manipulation by the BOJ is essentially destroying normal market behavior.  The following comes from Bloomberg…

Nobuyasu Atago, who also had worked at the BOJ and is now the chief economist at Okasan Securities Co., pointed out that instead of serving as a important source of cash for borrowers, the credit market has become a profit center for dealers looking to buy securities from investors and sell them to the central bank. While the strategy may be lucrative now, financial institutions face the risk of massive losses, he said.

“By making the trade with the BOJ the only source of profit, markets are exposed to unexpected volatility when that trade ends and the BOJ moves toward the exit,” Atago said. “Markets are being destroyed.”

The more global central banks try to “fix things”, the more they make our long-term imbalances even worse.

To me, it makes no sense to have a bunch of unelected, unaccountable central planners constantly monkeying with the financial system.  In a true free market system, we would allow market forces to determine the course of events.  But of course we don’t have a free market system anymore.  Instead, what we have is a heavily socialized system that is greatly manipulated by the central planners.

That is why global financial markets gyrate wildly if Janet Yellen so much as sneezes.  They know who holds all the power, and investors are constantly on edge as they wait for the latest pronouncement from our central banking overlords.

At this point, 99 percent of the global population lives in a country with a central bank.  Our world is more deeply divided than ever, and yet somehow everyone in the world has agreed to adopt this insidious system.

It sure is quite a coincidence, isn’t it?