When I was a young lad long before Atari video games and during the era of rotary telephones, hula hoops, and Red Ball Jets running shoes, I used to love to read Action Comics that featured the original “Superman” created by Jerry Siegel and Joe Shuster. All of the kids on the block used to idolize Superman but being the oddball that I was, I preferred the bald-headed character “Lex Luthor,” whose lifelong ambition was to slay the superhero usually with fragments of “kryptonite” rock from Superman’s native planet “Krypton” that exploded just after Superman was sent to earth in a capsule but which miraculously lands in a farmer’s field. I can’t begin to count the number of episodes where Luthor has Superman on the ground dangling a suspended chunk of glowing green rock in the S-Man’s face rendering him not only no longer indestructible, but also powerless.

And just when I thought that silver was taking on some of the super powers of our famed hero, with favorable COT structure and oversold conditions from three weeks ago, a yield-driven rally in the dollar sent a signal to the rampaging algobots who have since seen fit to trash silver from $17.43 to $16.53 all within a eight-day time frame, taking the RSI from 68.35 to 45.50 while knifing down through the 200-, 100-, and 50-day moving averages. For those out there that have ever doubted that the markets have lost all semblance of reason, you are getting a lesson in lunacy with this dollar rally and that is why.

The 10-year treasury yield is up from around 1.30% in mid-2016 to the current 3.03% level here in April 2018 because a number of reasons, the first being that the Fed has engaged “quantitative tightening,” whereby rates rise and its bloated balance sheet is allowed to “normalize” (“shrink”). The driver behind this, it would tell you, is that due to its masterful stewardship of the U.S. economy and its brilliant bailout of the banking system in 2009, the economy is now firing on all cylinders and labor markets are beginning to tighten. The Fed would have you believe that the low-inflation growth regime of 2009-2018 is going to be protected by way of a series of calculated rate hikes designed to keep the economy in “Goldilocks” mode, where economic activity is running at a “not too hot, not too cold” pace so beloved by the capital markets and stock buyers.

The reality is that with the amount of new credit created since the 2008 banking fraud financial crisis, the central planners haven’t the foggiest notion of the ultimate outcome of what is surely the greatest debasement in the history of global currencies. Whenever I see Secretary of the Treasury ex-Goldmanite Steve Mnuchin or ECB chief ex-Goldmanite Mario Draghi or Bank of England head ex-Goldmanite Mark Carney all standing in front of a microphone and camera flapping their lips about the future course of “policy,” I want to lob a large brick at the monitor because they want us all to be calm and continue buying stocks doing business as usual when in reality they are clueless. The globally coordinated onslaught of “quantitative easing” (money creation)–also known as “counterfeiting”–was nothing more than a monetary experiment and when the U.S. started buying toxic bonds off the banks in 2009, the ECB took one look at the rapidly recovering Dow Jones index and said “Oh, yeah? Well watch THIS!!!” and proceeded to double down. What followed was an orgy of financial gluttony the likes of which were not made truly clear until the Swiss National Bank decided to become one of the largest shareholders in Apple. The piece de resistance came when the PBOC joined the party and created the largest debt pool in the history of shadow banking and now, allegedly, it is all going to be “unwound”? Not bloody likely… 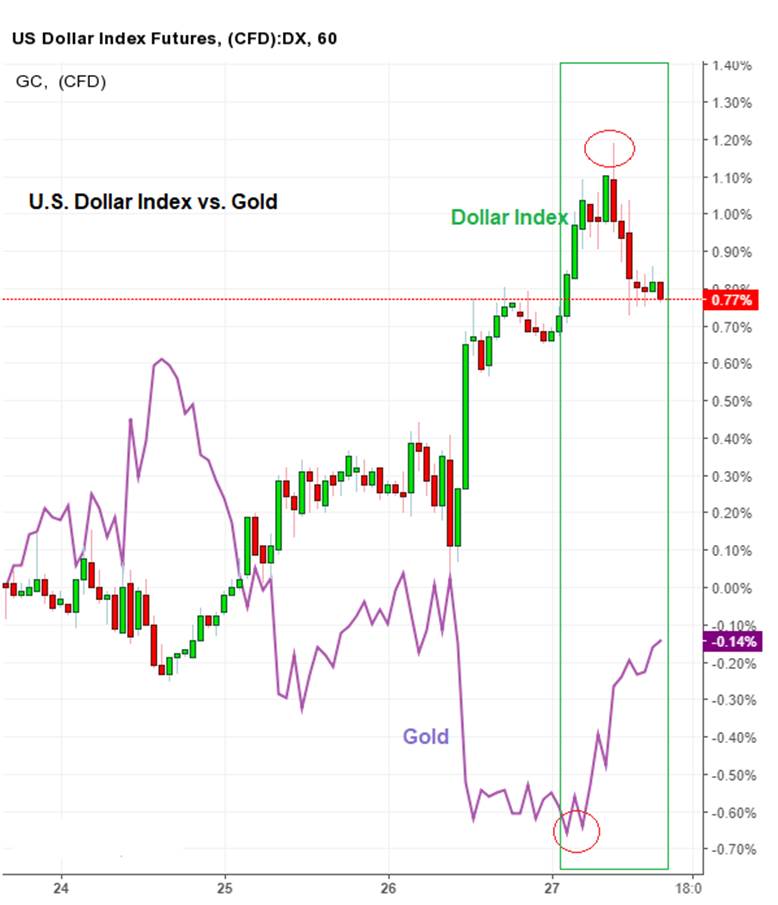 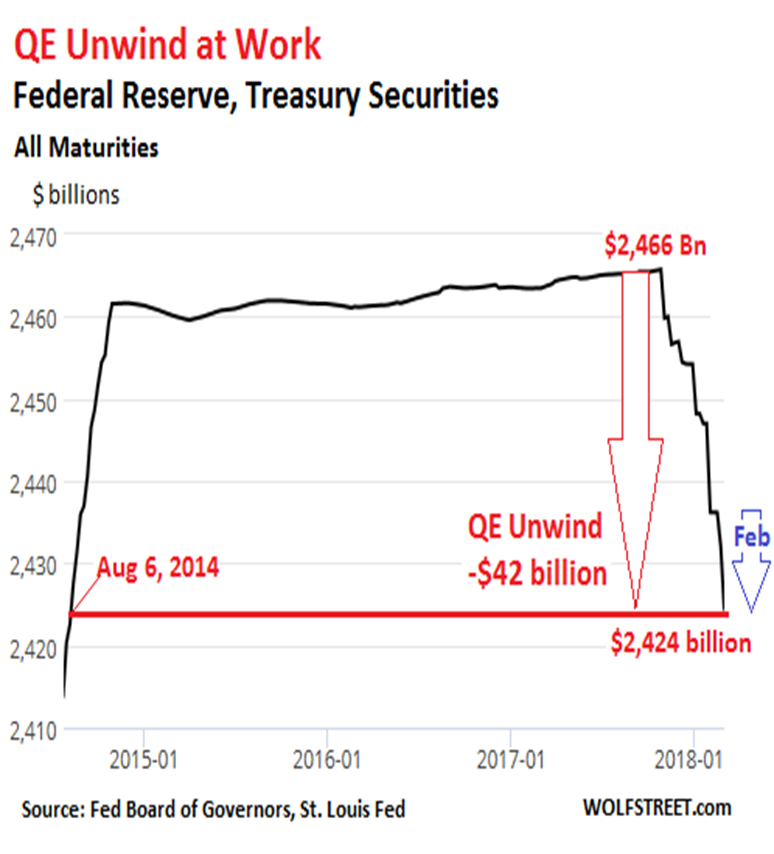 In the meantime, the U.S. Dollar Index took a run this morning at the 200-dma, sitting around 91.98 then abruptly turned on a dime and gave up all of the gains of the overnight session as of 3:00 p.m. on Friday afternoon, and is down on the day. As I commented on the other day, the machines are having their way with gold and silver prices by responding and reacting to every tick in the U.S. Dollar Index. Since the euro has such a large weighting in the DXY, it has been said that the euro is dictating price to the precious metals more than the Asian currencies or the pound. I will continue to view the 200-dma as the line in the sand for my option positions and after today’s reversal, I am probably going to buy back a few SLV June $15 calls for $0.75 because with SLV at $15.57, paying only an $0.18 premium is a decent entry and pumps up the leverage when gold finally punches out through $1,375. I have a hunch that with the dollar’s RSI and MACD readings stretched this week, today might have been the turn for the metals because the algos are taking gold up ($7.50) and silver has just eliminated what was a 9-cent drop earlier. In terms of seasonality, the first half of May is usually better than the latter half so that may be the window for the breakout in gold.

The COT report is out and lo and behold, it was the Large Speculators that got squeezed last week with the pop to $17.25. That hugely bullish short position has now been unwound so the edge we enjoyed three weeks ago at $16.20 is now lessened. It’s not gone completely but I’ll have to depend more on the reversal in the USD as the driver for the silver trade over the near term. 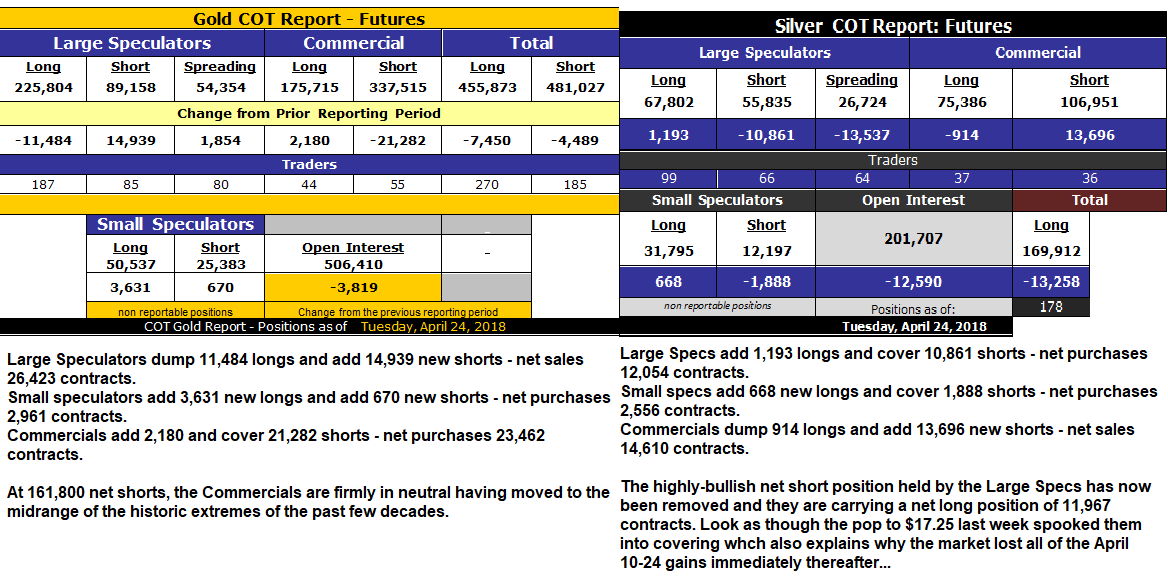 The junior explorcos in all of the metals have completely gone to sleep in what is now a statistical certainty that as soon as the PDAC ends, we should all sell everything related to junior miners. Back in the day, I used to tell everyone that the best-selling opportunity was in the weeks leading up to PDAC as the promotional initiatives were ramped up and retail investors were aggressive buyers because they assumed that all of the PDAC attendees would be hearing the booth pitches and running for the payphones to call their brokers. That used to happen with the guest speakers like Bob Bishop and Jim Dines quite often but we haven’t seen that type of market-moving charisma in years and certainly not since 2011. What the juniors like Stakeholder Gold Corp. (SRC:TSX.V) and Canuc Resources Corp. (CDA:TSX.V) and their dice-rolling brethren need is the ultimate resolution of this $1,300-$1,375 / $16.20-$17.25 trading ranges for gold and silver. We have threatened to break away from the ranges to the upside five times since gold last traded above $1,400 in 2014 and each time it fails, another group of retail investors throws in the towel. This constant drip of melting confidence in the eventuality of a return to the blistering exploration markets of the 1990s is a real impediment to attracting the new younger generation of stock investors who have seen explosive wealth creation in marijuana and crypto sectors with a newer wave of excitement occurring in battery metals and drones.

As for today, with very few exceptions the explorcos aren’t going to flourish as a group until either the underlying commodity price explodes higher (as did zinc and cobalt last year) or until there is a new BIG discovery where the junior moves tenfold resulting in a mass migration of crypto or battery metal players into the PM space in a quest to get a piece of the discovery “action.” The names I cover in this commentary are all involved with exploration projects in “elephant country” locales with Mexico and Nevada certainly host to some major deposits and where both states rank in the top percentile for silver production. In fact, Mexico is second to Peru in global silver production and remains a favourable exploration site.

I end this missive by raising a glass to my beloved Toronto Maple Leafs who bowed out to my second-most-beloved Boston Bruins on Wednesday after blowing a 4-3 lead in the third period. The team had its highest point total in franchise history and boasts two top players not yet past the age of 21. Unfortunately, the old hockey expression describing a gifted player with no hockey sense–“Million dollar legs and hands, ten-cent brain” applies to one of their group that went minus five for the night and looked like he belonged back in a Minnesota high school game. Oh well, the days of Bobby Baun scoring a game-winner on a taped-up, busted leg are gone for good.