In the context of relative performance, silver could easily assume the role of Terry Malloy (Marlon Brando in “On the Waterfront” [1954]) when he looks at his older brother and says: “I coulda had class. I coulda been a contender. I coulda been somebody, instead of a bum, which is what I am, let’s face it.” And make no mistake, silver has behaved like a bum, without class, never in contention, and a complete “nobody.” 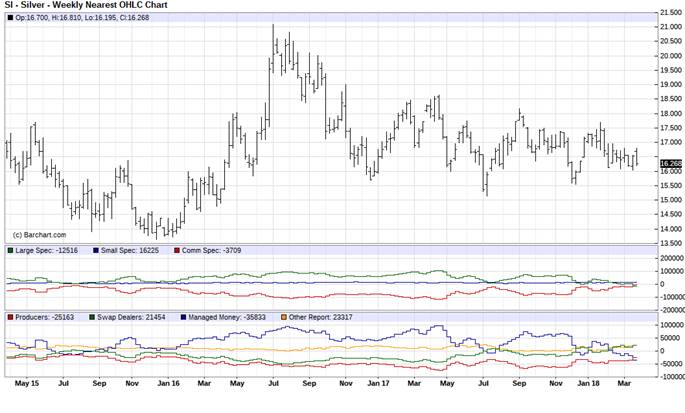 Investor sentiment for precious metals as compared to the FANGs or the cryptocurrencies or weed stocks is still about as feeble as can be with volumes way down and apathy abounding. The ratio of the HUI (NYSE Arca Gold BUGS Index) to gold resides at 2014 levels when gold was in full bear market retreat as opposed to the current two-year bull market that is alive and well and making progress. Despite the fact that gold has made higher highs for three consecutive quarters, silver simply fails to respond to what has to be considered superlative fundamentals with even the multi-year high in the gold-to-silver-ratio north of 80 failing to attract even the risk averse spreaders.

When I look at the trades that have worked and the ones that have not, I am reminded of that now-famous line by Dean Wormer (John Vernon in “Animal House [1978]) as he addresses a particularly underachieving student: “Fat, drunk, and stupid is no way to go through life, son.” Well, the stupidity lies in repetition and to continually beat myself up through countless triggered stop-losses in silver has driven me to drink and obesity, once again underscoring the relevance of Dean Wormer’s advice.

The one exchange in the world that has failed miserably since 2009 has been the TSX Venture Exchange, which is probably one of the very few exchanges that failed to make all-time highs in 2017. It is also the very exchange that has enriched me (and many others) over the past 40 years but the problem is that this “enrichment” has proven temporary at best and virtually non-existent since 2009. As Einstein famously said of insanity, it is behaviors repeated over and over with the same negative outcome that typifies one’s descent into madness.

So again, looking at my P&L statements for the past nine years, the gains in the ETFs for gold miners and volatility have been largely offset by give-backs in TSXV names where false start after false start force us to undergo countless whipsaws and stop-outs. So the cinematographic understatement of the past sixty years would certainly apply when Norman Bates says, “We all go a little mad sometimes,” in what was arguably the most frightening movie of all time and played magnificently by Anthony Perkins (“Psycho” [1960]).

Yet, despite all of these derogatory references to the Terry Malloys and Dean Wormers and Norman Bates in the world of gold and silver, I continue to believe that gold, silver, gold and silver miners, developers, and explorers are going to quite soon have their moments in the sunlight, finally out from under the rocks and tree stumps where they have been hiding in darkness for what feels like an eternity. It is no sin to expect that governments in this day and age should adhere to the principles of sound money and fiscal prudence but it IS a grave sin for me to invest as though they will.

Since the dawn of recorded time, men that are elected to office and those that the elected officials appoint fall victim to the noxious narcotic of profligate spending and the indiscriminate creation of credit, which is the unconstitutional manufacture of currency. Citizens of all nations are born into systems that allow education and employment for which they receive a wage, which is then used to support lifestyles. What is left after the hierarchy of needs is fulfilled is called “savings” and based upon the supposed mission statements of central bankers, there is a presumed obligation to protect the purchasing power of savings at all costs. If they don’t, citizens lose faith in the sanctity and integrity of currency and opt for other means of wealth preservation.

The most recent example of such a loss of faith in currency is the cryptocurrency mania which is considered by many of our younger investment gurus as “the new gold.” Pummeled by decades of anti-gold interventions and manipulations and government-sponsored defamation, sound money enthusiasts abandoned gold and silver for what they perceive as a “digital havens” that exist away from government control (and debasement). The meteoric rise of Bitcoin threatened the banking establishment and is now firmly in the crosshairs as government after government brings in legislation designed to force money back into the banking “system” so as to protect the time-tested symbiosis between government and the banks. The print and electronic media colludes with bankers and government to convince us that after-tax dollars are better served within the walls of the global banking cartel. And we actually believe it.

Once again resorting to the film industry for an analogy, I recall with great fondness the character Verbal Kint (Kevin Spacey in “The Usual Suspects” [1995]) when he opines that “The greatest trick the Devil ever pulled was convincing the world he didn’t exist.”That quote describes in spirit why we have been pulling our hair out with the new generations of investors content to day-trade Apple or Netflix or Amazon and store their savings in some virtual “bank” by way of a crypto. “The greatest trick the central banks ever pulled was convincing the world that their roles were to ‘fight inflation.'”

As we have witnessed since April 2009, the central banks around the globe have created more credit (counterfeit “money”) than in any other period in history and now that inflation is starting to once again emerge, they are threatening to raise interest rates to get ahead of the curve. The greatest financial experiment ever conducted was the insane torrent of quantitative easing that occurred EVERYWHERE since 2009 and that, in a nutshell, is why I will continue to respect 5,000 years of historical outcomes and continue to accumulate gold, silver, gold and silver miners, developers, and my beloved explorers until valuation discourages it. And based on current valuation, you can forget about “overvaluation” because there will be fortunes made by the time the adjective “fairly valued” becomes commonplace.

As we close out the month and head into Easter Weekend, as you ponder the words I have penned, think of this quote by Benjamin Button (Brad Pitt in “The Curious Case of Benjamin Button” [2008])

“Our lives are defined by opportunities, even the ones we miss.”