The silver futures market is split into two different players: the commercials and the non-commercials.

The commercial traders deal with silver primarily through industrial use and production, and through bullion dealing, as silver is more than just a precious metal investment. The white metal is a great heat conductor and very resistant to corrosion. It is a component of jewelry production, and can be found in electrical circuits and wiring, electronic screens, and photographic film.

Bullion dealers and silver producers on the commercial side will generally buy short contracts, because if the price falls and they are positioned to lose revenue on the sale of physical silver, they can hedge their losses by profiting off shorts.

Manufacturers who use silver as an industrial input will do the opposite, because if silver prices rise, they will want to offset the climbing expenses by playing the long silver game.

Non-commercial traders, known as the speculators, make up the other side of the silver futures marketplace.

They trade contracts, but will not be as interested in the physical delivery of silver underlying the contract. Instead, they will confine themselves to just trading “paper silver” and try to profit off the value of the contract, which will fluctuate based on the position and the price of physical silver, and adjust their positions accordingly.

These players have a huge impact on silver price movements, and their activity has a very tight correlation with where silver prices trade in the short-term. Here’s what their moves are showing us now…

What the Silver Futures Market Is Showing Us About Prices

On Friday, the Commodity Futures Trading Commission (CFTC) released its weekly Commitment of Traders Report, revealing that speculators are continuing to stake out short contracts as prices fall well below levels they were trading at when markets opened in 2014. Silver is down 0.9% on the year as of Friday’s close, trading at $19.395 an ounce.

Non-commercial traders totaled 27,464 short positions on the Comex, representing 138.2 million ounces of physical silver for delivery, as of last Tuesday. This is a 28.2% increase in the number of contracts from the week before, and is the fourth week in a row that speculators added to their shorts while also shedding long positions. 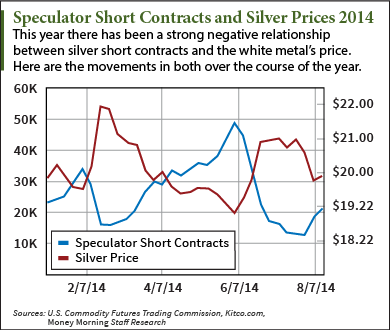 So far this year, speculator short contracts have been the futures market’s most telling indicator of where silver prices are going to move.

Since the beginning of the year, the price of silver has a statistical correlation with the number of speculator short positions of -0.85, a rather strong negative relationship. This means that in general, as the non-commercial traders stock up on short contracts, the silver price will go down in a similar pattern.

It also means that as speculators cover short positions, the price goes up, and the last time a heavy short buildup was liquated en masse by speculators, prices rose 11.5% over five weeks in June.

As positions build, prices will continue to fall. But with silver trading down on the year, speculators are soon likely to try and capture gains on the downside and reestablish long positions as prices posture for an upswing.

While it is yet to be seen where the peak for these contracts is, and conversely where prices will bottom out, silver traders will be rewarded for their patience if they wait out this current bearish session in the futures market.