But 2014’s one-day slips in the Dow are about half as big as the worst daily point drops in Dow history.

Here are the 10 largest one-day plunges ever in the Dow’s closing value. Note: These are not the largest changes during the trading day (intraday). 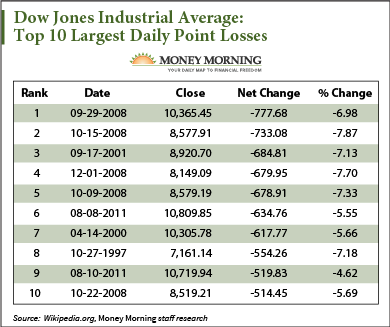 The biggest ever single-day crash on Sept. 29, 2008, came after the U.S. House of Representatives rejected the government’s $700 billion bank bailout plan. This Dow drop obliterated $1.2 trillion in market value.

News that Wachovia (which was acquired by Wells Fargo in 2008) had to sell its banking assets to Citigroup (NYSE: C) the same day didn’t help, nor did the collapse of a number of European banks.

This time, recession talk fueled the 7.9% decline. A weak sales report, bleak forecasts from the U.S. Federal Reserve, and sober comments from Fed Chairman Ben Bernanke all contributed to the day’s plummet. (Which was still far off from the largest-ever percentage loss – 22.6% on “Black Monday,” Oct. 19, 1987.)

The third-largest single day crash occurred on Sept. 17, 2001, seven years before the subprime crisis would beat the 684-point drop. Trading resumed for the first time following the Sept. 11 terrorist attacks – the longest trading pause since the Great Depression. The airline industry suffered the most; weakness in airline stocks would send the Dow Jones Transportation Average down 15% this day.

Fast forward 10 years to  Aug. 8, 2011. Wall Street suffered its worst drop since 2008’s subprime crisis on news that the United States might lose its AAA credit rating. U.S. stocks declined 15% over the two weeks leading up to the Aug. 8 fall.

The seventh-largest daily point crash was caused by Fed fear. On April 14, 2000, the government reported prices at the consumer level showed surprising strength the month before. As a result, investors feared the Fed would aggressively raise interest rates.

This rings eerily familiar to present-day market volatility caused by the Fed’s decision to start scaling back its quantitative easing (QE) program.

The Hong Kong Hang Seng Index was the culprit – it dropped 6% in trading, sparking a mini-crash on the Dow. Interestingly, the Dow closed 30 minutes early that day because it’d reached “circuit breaker levels,” according to the U.S. Securities and Exchange Commission.

We’re in the midst of the greatest investing boom in almost 60 years. And rest assured – this boom is not about to end anytime soon. You see, the flattening of the world continues to spawn new markets worth trillions of dollars; new customers that measurein the billions; an insatiable global demand for basic resources that’s growing exponentially; and a technological revolution even in the most distant markets on the planet.And MoneyMorning is here to help investors profit handsomely on this seismic shift in the global economy. In fact, we believe this is where the only real fortunes will be made in the months and years to come.