Precious metal investors are highly sensitive to negative economic news. Foreign policy crises, such as those being observed right now on the Russian and Ukrainian border or in the Gaza strip, for example, will have investors pour into the precious metals on fears that tensions overseas will rattle equity markets. 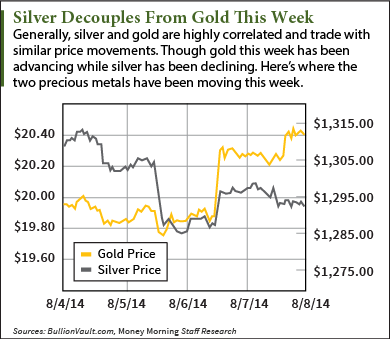 Similarly, when there is any indication that inflation will accelerate in the near future, as is the case when U.S. Federal Reserve Chairwoman Janet Yellen holds steady on highly accommodative and stimulative monetary policy, investors move into these vehicles as protection against a weakening dollar.

Gold is the premier investment in the precious metals complex, and the default choice for many safe-haven investors. But when traders begin buying gold, silver gets residual investment interest. Because silver volume is a small fraction of gold’s it tends to be more volatile, subject to more pronounced surges in bullish times, and more devastating losses in bearish times.

“Once the trend is established, silver starts getting buyers, it starts to outpace gold because it’s a smaller capitalized market,” Chief Operating Officer (COO) of Asset Strategies International, Richard Checkan told Money Morning. “It’s like a throwing a rock into a lake versus a puddle, the relative splash is much bigger in the puddle.”

This was clear in the last big precious metals rally that happened in June. On the month, gold prices rallied 6.2%, while silver was up 11.9%. But in the bear session that preceded it, from silver’s peak in February to its trough in early June, silver lost 14.8% while gold only dropped about 7%.

Gold has mostly been moving on international tensions this week.

Last week, the U.S. and the European Union leveled sanctions against President Vladimir Putin’s Russia for supporting pro-Russian rebels in Ukrainian territory and acting as a destabilizing force. Putin has since launched his own trade restrictions on food and agricultural products as a retaliatory measure.

What has further worried international observers is the fear that Russia will invade Ukraine, using humanitarian intervention as a pretext. On Wednesday, tensions escalated in Donetsk, an industrial Ukrainian city that lies on the border of Russia, as pro-Russian separatists and Ukrainian forces renewed clashes that claimed the lives of 18 Ukrainian soldiers, Voice of America reported.

Silver moved on that day from $19.74 an ounce to above $20, but fell in the days to follow. Gold pushed up above $1,300 and has sustained that through the rest of the week.

The reason for silver’s decline is primarily lingering – though natural – market forces. July became a month for profit-taking on the heels of a six-week rally, uncharacteristic of summer trading. Traders were looking to lock in gains above $21 as silver was approaching three-month highs.

Further working against silver prices is speculator activity. Typically, when traders in the futures markets build up large short positions – bets on an assets decline – silver will decline until those contracts reach a peak. As soon as short futures contracts hit their highest, short sellers will begin to liquidate their position, buy long, and push prices up.

In early June, short futures contracts for silver were at record highs, according to data from the Commodity Futures Trading Commission, and this helped spark a six-week bull session.

According to the most recent data, short positions are at yearly lows, and if they are in fact bottoming out, silver could be in for a period of price weakness in the short-term.