According to shocking new numbers that were just released by the Bureau of Labor Statistics, 20 percent of American families do not have a single person that is working.  So when someone tries to tell you that the unemployment rate in the United States is about 7 percent, you should just laugh.  One-fifth of the families in the entire country do not have a single member with a job.  That is absolutely astonishing.  How can a family survive if nobody is making any money?  Well, the answer to that question is actually quite easy.  There is a reason why government dependence has reached epidemic levels in the United States.  Without enough jobs, tens of millions of additional Americans have been forced to reach out to the government for help.  At this point, if you can believe it, the number of Americans getting money or benefits from the federal government each month exceeds the number of full-time workers in the private sector by more than 60 million.

When I was growing up, it seemed like anyone that was willing to work hard could find a good paying job.  But now that has all changed.  At this point, 20 percent of all the families in the entire country do not have a single member that has a job.  That includes fathers, mothers and children.  The following is how CNSNews.com broke down the numbers…

To be honest, these really are Great Depression-type numbers.  But over the years “unemployment” has been redefined so many times that it doesn’t mean the same thing that it once did.  The government tells us that the official unemployment rate is about 7 percent, but that number is almost meaningless at this point. 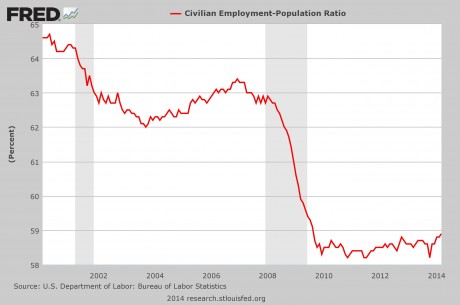 That means that more than 41 percent of all working age Americans do not have a job.

When people can’t take care of themselves, it becomes necessary for the government to take care of them.  And what we have seen in recent years is government dependence soar to unprecedented levels.  In fact, welfare spending and entitlement payments now make up 69 percent of the entire federal budget.  For much more on this, please see my previous article entitled “18 Stats That Prove That Government Dependence Has Reached Epidemic Levels“.

And what is even more frightening is that more families are falling out of the middle class every single day.