Bullish and bearish factors are pulling the price of the energy commodity in opposite directions since April. The final week of August was a time when buying returned to the oil market. Developments surrounding Iran and a pair of bullish inventory reports from the American Petroleum Institute and the Energy Information Administration supported the price of oil. Oil was floating in the middle of its trading range at the end of the eighth month of 2019.

The United States Oil Fund (USO) is a product that moves higher or lower with the price of nearby NYMEX futures.

A volatile week in the crude oil market

The price of crude oil traded around its pivot point at $55.475 per barrel last week. 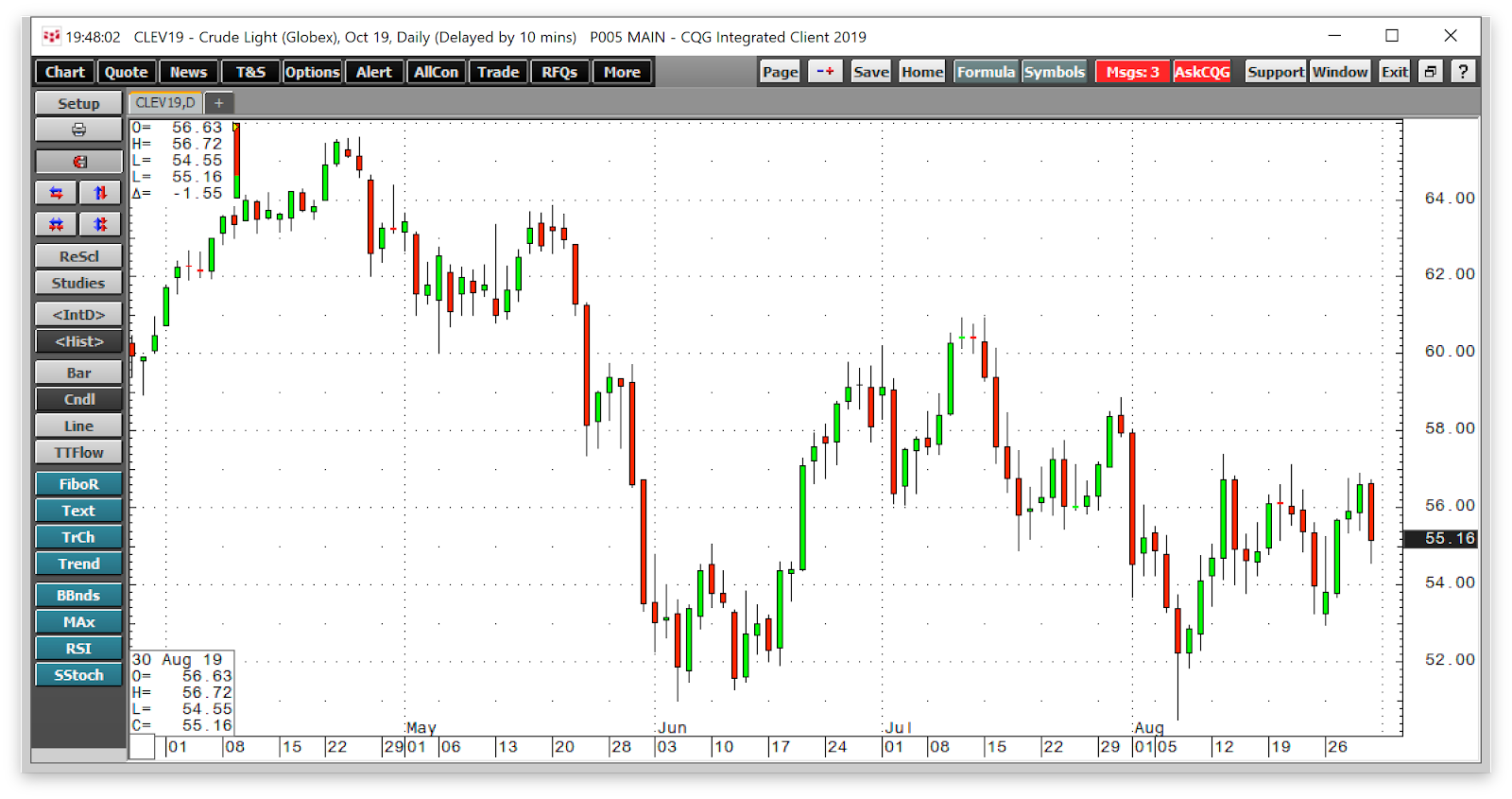 The daily chart of October NYMEX futures highlights the price range from $52.96 to $56.89 per barrel. The price of the energy commodity continues to lean towards the downside. On Friday, the price declined by $1.61 per barrel on the back of a new high in the dollar index, and fears of a looming recession in the US and around the world. The pattern of lower highs in the oil market since late April remained intact at the end of August. In three of the five sessions last week, crude oil traded in more than a $2 per barrel range. Even though the price is going nowhere fast, the market remained volatile on an intraday basis.

A surprise arrival at the recent G7 meeting in France was the Iranian Foreign Minister. French President Macron attempted to put the US and Iran together to talk about a new nuclear nonproliferation agreement. US President Trump has always said that he is more than willing to sit down with Iranian officials to find a solution that prevents Iran from obtaining nuclear weapons and lifts sanctions. However, Iran poured cold water on the French initiative by stating as a precondition to any talks the US must lift sanctions.

The bottom line is that sanctions are choking the Iranian economy and could threaten the theocracy in Teheran. However, we have learned that the nation can live under austere conditions as they had since the Islamic Revolution in the late 1970s. The stalemate over any agreement and standoff in the Middle East will continue until one side blinks. The potential for another round of provocations from Iran remains high, and that could lift the price of crude oil in the blink of an eye. While the potential for a global recession because of the trade war between the US and China is bearish for crude oil, Iran is bullish.

Last week, oil attempted to rally after the American Petroleum Institute and Energy Information Administration reported much more substantial inventory declines than the market had expected. The API said crude oil stockpiles fell by 11.1 million barrels for the week ending on August 23. The EIA reported a drop of 10 million barrels. Both agencies noted that oil product stocks also moved lower for the same week.

The EIA told the market that US crude oil output reached a new record high at 12.5 million barrels per day for the same week. However, last Friday, Baker Hughes reported that the number of rigs in operation declined by 12 to 742, 120 below where they stood at this time in 2018. The falling rig count and increased production mean that the US has become more efficient at extracting crude oil from the crust of the earth. However, if the number of operating oil rigs continues to drop, production could follow. The stockpile and production data were a bullish factor for the oil market last week.

With Iran and falling inventories on one side of the fundamental equation, and recession fears on the other, the price of oil closed the week at the midpoint and went nowhere fast.