The rally is just getting started, said Ari Wald, head of technical analysis at Oppenheimer, who upgraded the diversified financials industry group over the weekend.

“This is a play on cyclicals in general,” Wald said Monday on CNBC’s “Trading Nation. ” “These oversold conditions for interest rates, this is dry powder for cyclicals. Speaking in terms of the 10-year U.S. Treasury yield, the yield is currently over 60 basis points below its 200-day moving average — extremely stretched on the downside.”

The U.S. 10-year Treasury yield recently reached its most oversold condition since January 2015, Wald said. The benchmark bond yield has fallen from 2.42% to 2.14% in the past three weeks.

The move higher again should benefit high-beta stocks, he said, particularly the financials which tend to rise when the yield curve steepens. Longer-term bonds with higher yields than shorter-term bonds expand a bank’s profitability.

Wald is watching two of those stocks, in particular.

“The first one is S&P Global. The stock has had a fresh breakout above its 2018 high point at $215, typically the breakout point becomes support and on the upside we think that breakout measures to $260, ” he said. 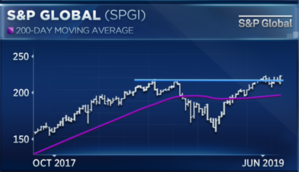 “Second name, consumer finance company American Express. Here’s a stock that broke above 2018 resistance ahead of the market, now more recently getting above its May peak ahead of the market. Again, a sign of relative strength, a sign of leadership. These are names we expect continue to carry the market higher, ” Wald said. 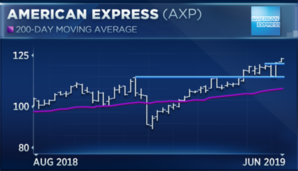 “I think 2.10% [on the 10-year] was a near-term bottom and as the 10-year comes back up and goes to 2.50%, it’s going to be a natural re-steepening of the yield curve and I don’t think you really need to be that picky. Everything I think is going to go up and within that, I actually like J.P. Morgan, ” Schlossberg said during the same segment.

J.P. Morgan has outperformed the XLF financial ETF over the past three months, gaining 6% compared with the gain of 5% for the financials. The big bank is also up 5% this month.

“It’s done really, really well even in this difficult environment and I think if we get a tail wind as the yields start to widen again it’s only going to become more profitable for me. So I just simply like taking the JPM trade into this assumption that the 10-year yields are going to go back up. That’s going to be the key thing,” Wald said.

XLF currently has an ETF Daily News SMART Grade of A (Strong Buy), and is ranked #1 of 36 ETFs in the Financial Equities ETFs category.