From Jeff Cox : The corporate earnings picture continues to deteriorate, with companies exposed to tariffs taking a particularly strong hit.

As profit reports just start to trickle in, the expectations are getting worse. Forecasters already were indicating negative earnings growth for the second quarter, but the outlook also has swung into red numbers for the third quarter, according to the latest FactSet calculations.

The data firm now estimates that the third quarter outlook has changed from a slight gain of 0.2% as recently as June 7 to a slight decline of 0.3% as of late last week. Including the Q1 0.3% decline and an expected drop of 2.6% in Q2, that would mark the first three-quarter pullback in profits in three years, during the earnings recession from Q4 2015-Q2 2016. 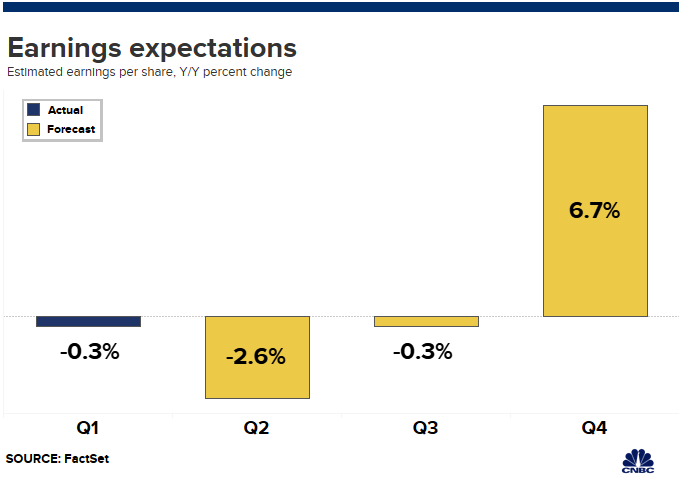 While earnings usually come in substantially ahead of expectations — as much as 4 or 5 percentage points is not unusual — the downward direction in the outlook doesn’t speak well for what lies ahead. FactSet Q3 estimates have dwindled from expectations for a 3.4% gain to the negative number now in the forecast.

The primary culprit for the downward trend has been weakness for multinational companies. FactSet recently estimated that companies that do more than half their business outside the U.S. likely will see an earnings decline of 9.3% in Q2. Those that do a majority of sales domestically were projected to see a 1.4% growth rate.

‘Taking a whack at estimates’

Companies that derive a high level of sales from overseas — think firms like Apple, Boeing and Intel –are especially susceptible to fallout from the U.S.-China trade war and the tariffs that have ensued. Wall Street strategists are taking notice and expressing increasing levels of concern about what it will mean for a market hovering around record highs.

“Analysts are pricing in a longer drawn-out trade war and are taking a whack at estimates,” said Art Hogan, chief market strategist at National Holdings Corp. “I think that’s logical. That begets the next question: Do we look expensive compared to what we know and what estimates look like?”

Price-to-earnings compared to the next 12 months of earnings is at 16.8, above the 10-year norm of 14.8 and the typical five-year level of 16.5. That means valuations are a bit expensive though not by much.

Still, the stock market has been buoyed by consistently expanding margins. Should profits ebb over more than the short term — investors will get a better view of the road ahead during post-earnings conference calls — that will raise questions over whether valuations even at this level are too high.

“Our view remains that the US economy is experiencing a material slowdown after running too hot last year and this slowdown is now manifesting itself in poor earnings growth and deteriorating economic conditions,” Michael Wilson, equity strategist at Morgan Stanley, said in a note to clients.

Wilson expects that if the data continues to weaken through the third quarter, the market is likely to see a 10% correction. Even in the best-case scenario, with Federal Reserve easing, Wilson sees upside as “limited” and says “risk is elevated.”

Earnings estimates, at least, get more optimistic after the shallow recession forecast through the third quarter. From there, growth is slated to accelerate to 6.7% in the fourth quarter and 10.3% to start 2020. Full-year earnings for 2019 are expected to show a modest 2.8% gain even though the S&P 500 has gained nearly 18% year to date.

Investors have been looking for Fed interest rate cuts to help through a rough patch of weak earnings and downbeat economic signs.

“The bet’s still predicated on hoping this Fed insurance rate cut is just a stop-gap measure until we get out of the trade war,” Hogan said. “The longer this lasts, the more economic damage is done, and there’s a point of no return.”