I have never done anything like this before.  Ever since I started my blog in late 2009, I have never issued any kind of “red alert” for any specific period of time.  As an attorney, I was trained to be level-headed and to only come to conclusions that were warranted by the evidence.  So this is not something that I am doing lightly.  Based on information that I have received, things that I have been told, and thousands of hours of research that have gone into the publication of more than 1,300 articles about our ongoing blog, I have come to the conclusion that a major financial collapse is imminent.  Therefore, I am issuing a RED ALERT for the last six months of 2015.

What I am attempting to communicate is that we are right at the door of a major turning point.  About this time of the year back in 2008, my wife and I went to visit her parents.  As we sat in their living room, I explained to them that we were on the verge of a major financial crisis, and of course the events that happened a few months later showed that I was right on the money.

This time around, I wish that I could visit the living rooms of all of my readers and explain to them why we are on the verge of another major financial crisis.  Unfortunately, that is not possible, but hopefully this article will suffice.  Please share it with your friends, your family and anyone else that you want to warn about what is coming.

Let’s start with a little discussion about the U.S. economy.  Most of the time, when I use the term “economic collapse” what most people are actually thinking of is a “financial collapse”.  And we will talk about the imminent “financial collapse” later on in this article.  But just because stocks have recently been hitting all-time record highs does not mean that the overall economy has been doing well.  This is a theme that I have hammered on over and over again.  It is my contention that we are in the midst of a long-term economic collapse that has been happening for many years, that is happening as you read this article, and that will greatly accelerate over the coming months. 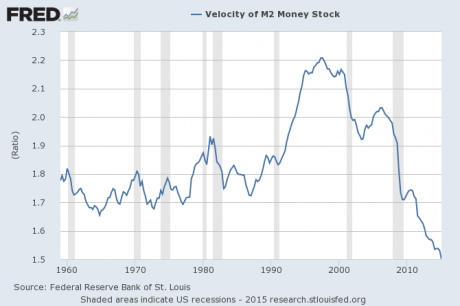 This is the kind of chart that you would expect from a very sick economy.  And without a doubt, our economy is sick.  Even the official government numbers paint a picture of an economy that is deeply troubled.  Corporate profits have declined for two quarters in a row, U.S. exports plunged by 7.6 percent during the first quarter of 2015, U.S. GDP contracted by 0.7 percent during the first quarter, and factory orders have declined year over year for six months in a row.

If the stock market was connected to reality, it would be going down.  But instead, it has just kept going up.  As I discussed yesterday, this is a classic case of an irrational financial bubble.  If I was writing an economic textbook and I wanted to include an example of what a run up to a major financial crash looks like, it would be hard to come up with anything more ideal than what we have watched unfold over the last six months.  Just about every pattern that has popped up prior to previous stock markets crashes is happening again, and this is something that I have written about so much that many of my readers are sick of it.

And without a doubt, our financial markets are primed for a crash.

Only two times before has the S&P 500 been up by more than 200 percent over a six year time frame.

The first was in 1929, and the stock market subsequently crashed.

The second was in 2000, right before the dotcom bubble burst.