Federal Reserve Chairman Ben Bernanke is determined to push mortgage rates to record low levels and he is encouraging the banks that the Fed regulates to make home loans more freely.  Wait a second – isn’t that exactly what caused the last housing bubble?  After 9/11, the Federal Reserve slashed interest rates and this caused mortgage rates to steadily fall.  Financial institutions were urged to help “expand home ownership” in America, and many of them started making home loans to people who never, ever should have gotten home loans.  When mortgage rates started to go back up, millions of families with adjustable rate mortgages discovered that they could not make their monthly payments.  Mortgage delinquencies absolutely soared and large numbers of mortgage-backed securities suddenly turned into garbage.  So what is the Fed doing about it?  The Fed recently announced another round of quantitative easing in which it will buy 40 billion dollars worth of these mortgage-backed securities a month.  Essentially the Fed is clearing the bad financial paper out of the system and is creating the conditions for another housing bubble.  But will we really fix our problems by going back and doing the same things that got us into trouble in the first place?

The following chart shows how interest rates on 30 year conventional mortgages have declined over the past 30 years.  After 9/11, mortgage rates were pushed to ridiculously low levels and that helped create the mess that we are currently in.

So what did the Fed decide to do to fix things?  They decided to push mortgage rates even lower…. 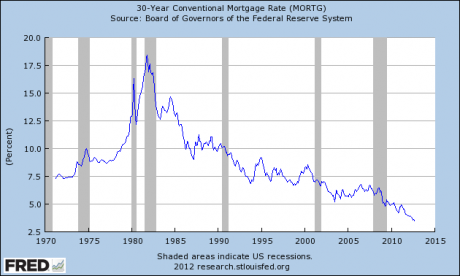 But even with mortgage rates at exceptionally low levels, new home sales in the United States continue to hover around record lows.

Does this look like a “housing recovery” to you?…. 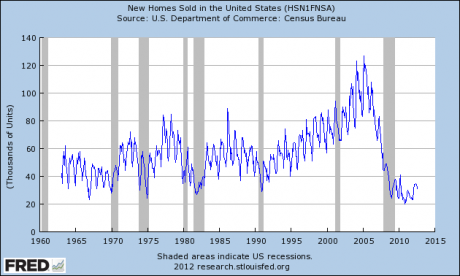 Of course we are not experiencing a housing recovery.

In order to have a housing recovery, people need to be able to afford to buy homes.

Unfortunately, median household income in the United States has declined for four years in a row, and the employment rate is currently just 0.1 percent above the lowest point that it has been at during this entire economic crisis.

And most of the new jobs that our economy is producing are low paying jobs.

As I have written about previously, only 24.6 percent of all jobs in America today are “good jobs”. GET A FREE TREND ANALYSIS FOR ANY STOCK HERE!

But if you don’t have a good job you can’t afford to buy a good house.

So unless Federal Reserve Chairman Ben Bernanke can somehow magically make millions of good jobs fall from the sky, the truth is that we actually need housing prices to fall so average American families can afford them.

When we push families into mortgages that they cannot afford, large numbers of them end up defaulting on those mortgages. 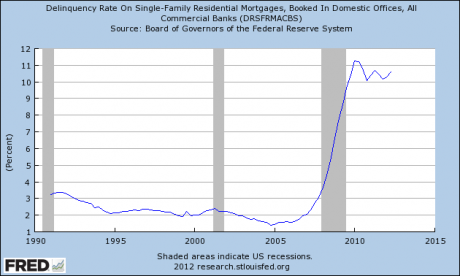 So the foreclosure nightmare is far from over.  There are going to be millions and millions more families that are going to lose their homes eventually.

In fact, there are some very troubling signs that things are taking a turn for the worse….

-In the state of Illinois, the number of foreclosures is increasing again.

-In the state of New York, the number of pre-foreclosure notices has absolutely exploded over the past two years.

-In the state of California, mortgage delinquency rates are absolutely frightening.

We don’t want housing prices to rise until incomes start rising again.  We don’t want to pump up home values and then get millions more American families to agree to mortgages that they cannot handle.

We need homes to be priced at levels that American families can afford, but Bernanke seems to think that rising home prices will solve our problems.  And in some areas of the country home prices are actually rising.  We are seeing a lot of investors and foreigners come in and pay cash for homes in many of our major cities.

Meanwhile, hard working families all over America are wondering why things never seem to work out for them.

If Bernanke really wanted to fix the housing market, the following three things would help….

1) Let the free market determine housing prices.  Eventually home prices would fall to levels where people could afford them. GET A FREE TREND ANALYSIS FOR ANY STOCK HERE!

2) Stop manipulating mortgage rates and let the free market determine them.  Eventually they would settle at a level that is good for both consumers and financial institutions.

3) Tell banks to only make home loans to people that can afford them.

But the central planners over at the Federal Reserve are not going to do those things.  Instead they are going to keep printing money, keep manipulating interest rates and keep trying to create another housing bubble.

Of course the first two rounds of quantitative easing did none of those things, but somehow everyone seems to think that by doing the same thing again we will get a different result this time.

But what the first two rounds of quantitative easing did accomplish was that they padded the profits of the big banks.

And apparently QE3 is already accomplishing that.  The following is from a recent CNBC article….

Bank profits from new mortgages have soared since the Federal Reserve began its third round of bond purchases two weeks ago, fuelling the debate over the fallout of the latest dose of quantitative easing.

The extent to which QE3 drives down new mortgage rates and helps homeowners or is pocketed by banks will be crucial to the success of the policy and the prospects for growth in the U.S. and global economies next year.

So once millions more American families lose their houses and most of us can’t afford to buy homes, where are we supposed to live?

Well, I have a few suggestions….

You could live in an abandoned automobile factory.

You could take over a convenience store and live there.

You could build an underground shelter and prepare for the coming financial crisis.

You could construct a tree house in the middle of a forest and get away from it all.

Does anyone else have any other suggestions?