You can’t accuse Federal Reserve Chairman Ben Bernanke of not living up to his nickname.  Back in 2002, Bernanke delivered a speech entitled “Deflation: Making Sure ‘It’ Doesn’t Happen Here” in which he referenced a statement by economist Milton Friedman about fighting deflation by dropping money from a helicopter.  Well, it might be time for a new nickname for Bernanke because what he did today was a lot more than drop money from a helicopter.  Today the Federal Reserve announced that QE3 will begin on Friday, but it is going to be much different from QE1 and QE2.  Both of those rounds of quantitative easing were of limited duration.  This time, the quantitative easing is going to be open-ended.  The Fed is going to buy 40 billion dollars worth of mortgage-backed securities per month until they have decided that the economy is in good enough shape to stop.  For those that get confused by terms like “quantitative easing” and “mortgage-backed securities”, what the Federal Reserve is essentially saying is this: “We’re going to print a bunch of money and buy stuff for as long as we feel it is necessary.”  In addition, the Federal Reserve has promised to keep interest rates at ultra-low levels all the way through mid-2015.  The course that the Federal Reserve has set us on is utter insanity.  Ben Bernanke can rain money down on us all he wants, but it is not going to do much at all to help the real economy.  However, it will definitely hasten the destruction of the U.S. dollar.

And the Federal Reserve is apparently very eager to get QE3 going.  Purchases of mortgage-backed securities are going to start on Friday.

In the coming months, hundreds of billions of dollars that the Federal Reserve has zapped into existence out of nothing will be injected into our financial system.

So what will happen to all of this new money?

If banks and financial institutions use that money to make loans then it could have somewhat of a positive impact on the economy in the short-term.

However, the truth is that it isn’t as if banks are hurting for cash to loan out.  In fact, right now banks are already sitting on $1.6 trillion in excess reserves.  Just like with the first two rounds of quantitative easing, a lot of the money from QE3 will likely end up being put on the shelf. GET A FREE TREND ANALYSIS FOR ANY STOCK HERE!

But the stock market loved the news because they know that the previous two rounds of quantitative easing have been great for the financial markets.  On Thursday, the stock market soared to levels not seen since December 2007.

There is much rejoicing on Wall Street right now.

And this stock market bounce is great for Bernanke’s good buddy Barack Obama.

Obama nominated Bernanke to a second term as Fed Chairman, and this might be Bernanke’s way of paying him back.

But of course the Fed is supposed to be “above politics” so that would never happen, right?

The Federal Reserve essentially “crossed the Rubicon” today.  No longer will quantitative easing be considered an “emergency measure”.  Rather, it will now be considered just another “tool” that the Fed uses in the normal course of business.

Considering how vulnerable the U.S. dollar already is, announcing an “open-ended” round of quantitative easing is utter foolishness.  According to the Fed, when you add the 40 billion dollars of new mortgage-backed security purchases per month to all of the other “easing” measures the Fed is continuing to do, the grand total is going to come to about 85 billion dollars a month.  The following is from the statement that the Fed released earlier today….

To support a stronger economic recovery and to help ensure that inflation, over time, is at the rate most consistent with its dual mandate, the Committee agreed today to increase policy accommodation by purchasing additional agency mortgage-backed securities at a pace of $40 billion per month. The Committee also will continue through the end of the year its program to extend the average maturity of its holdings of securities as announced in June, and it is maintaining its existing policy of reinvesting principal payments from its holdings of agency debt and agency mortgage-backed securities in agency mortgage-backed securities. These actions, which together will increase the Committee’s holdings of longer-term securities by about $85 billion each month through the end of the year, should put downward pressure on longer-term interest rates, support mortgage markets, and help to make broader financial conditions more accommodative.

The Committee will closely monitor incoming information on economic and financial developments in coming months. If the outlook for the labor market does not improve substantially, the Committee will continue its purchases of agency mortgage-backed securities, undertake additional asset purchases, and employ its other policy tools as appropriate until such improvement is achieved in a context of price stability. In determining the size, pace, and composition of its asset purchases, the Committee will, as always, take appropriate account of the likely efficacy and costs of such purchases.

So what does all of this mean?

I really like how one analyst put it when he described this announcement as a “I’m gonna ease till your eyes bleed kinda statement“.

To support continued progress toward maximum employment and price stability, the Committee expects that a highly accommodative stance of monetary policy will remain appropriate for a considerable time after the economic recovery strengthens. In particular, the Committee also decided today to keep the target range for the federal funds rate at 0 to 1/4 percent and currently anticipates that exceptionally low levels for the federal funds rate are likely to be warranted at least through mid-2015.

It seems that whenever the U.S. economy gets into trouble, Bernanke and his friends at the Fed only have one prescription and it goes something like this….

“Print more money and promise to keep interest rates near zero even longer.”

Of course a lot of Republicans are quite disturbed that QE3 was announced with just a couple of months remaining in a very heated election battle.

Even big news organizations such as CNBC are commenting on this….

Though the Fed is ostensibly politically independent, the decision comes at a ticklish time with the presidential election less than two months away.

And without a doubt the mainstream media will be proclaiming this to be “good news” for the economy in the short-term.

But is QE3 really going to help the average person on the street?

Well, first let’s take a look at employment.  We are told that one of the primary reasons for QE3 is jobs.

But did QE1 and QE2 create jobs?

The answer is clearly no. GET A FREE TREND ANALYSIS FOR ANY STOCK HERE!

As you can see from the chart below, the percentage of working age Americans with a job fell dramatically during the last recession and has not bounced back since that time despite all of the quantitative easing that has been done already…. 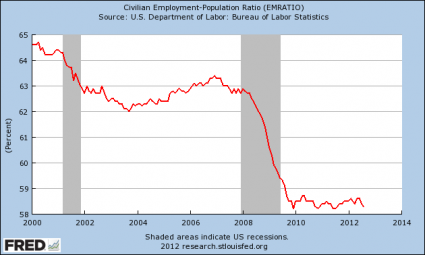 So why try the same thing again when it did not work the first two times?

But what more quantitative easing is likely to do is to pump up stock market values because a lot of the money from QE3 is going to end up being put into stocks and other investments.

This is going to help the wealthy get even wealthier, and it is going to make the “wealth gap” between the rich and the poor even larger in America.

QE3 is also probably going to cause commodity prices to rise just like QE1 and QE2 did.

That means that you will be paying more for gasoline, food and other basic necessities.

So there may not be more jobs, but at least you will get the privilege of paying more for things.

The inflation that QE3 will cause will be particularly cruel for those on fixed incomes such as retirees.

None of the extra money from QE3 is going to go into their pockets, but they will have to pay more to heat their homes and fill up their shopping carts.

And the “exceptionally low interest rate” policy of the Federal Reserve is absolutely devastating for those that have saved for retirement and that are relying on interest income for their living expenses.

In short, quantitative easing is very good for the wealthy and it is very bad for the average man and woman on the street.

But what else would you expect from the Federal Reserve?

It is imperative that we educate the American people about the Federal Reserve and about how they are destroying our economy.  For much more on this, please see my previous article entitled “10 Things That Every American Should Know About The Federal Reserve“.

Perhaps the biggest danger from QE3 is that it could greatly hasten the day when the U.S. dollar ceases to be the reserve currency of the world.

The rest of the world is not stupid.  They see that the Federal Reserve is now firing up the printing presses whenever they feel like it.  They can see the games that we are playing with our currency.

Why should the rest of the world continue to use the U.S. dollar to trade with one another when the United States is constantly debasing it and playing games with its value?

As I wrote about the other day, China and Russia have been calling for a new reserve currency for the world for several years.  They have been leading the charge to conduct international trade in currencies other than the U.S. dollar, and I have documented many of the major international agreements to move away from the U.S. dollar that have been made in the last couple of years.

The status of the U.S. dollar in the world has already been steadily slipping, and now Helicopter Ben Bernanke pulls this kind of nonsense.

We are handing the rest of the world an excuse to abandon the U.S. dollar on a silver platter.

And when the rest of the globe rejects the U.S. dollar as a reserve currency, the dollar will crash, the cost of living will increase dramatically, our standard of living will go way down and we will never fully recover from it. GET A FREE TREND ANALYSIS FOR ANY STOCK HERE!

So if you think that things are “bad” now, just wait until that happens.

The U.S. dollar is one of the best things that the U.S. economy still has going for it, and Helicopter Ben Bernanke is doing his best to absolutely destroy that.

What is your opinion of QE3?  Please feel free to post a comment with your thoughts below….