Michael Snyder: Have you ever watched a football game or a basketball game where one team dominates the other team so badly that calling it a “blowout” would be a huge understatement?  Well, that is what China (NYSEArca:FXI) is doing to the United States.  China is absolutely destroying America on the global economic stage.  Once upon a time, the Chinese economy (NYSEArca:FXP) was a joke and the U.S. economy was the most powerful the world had ever seen.  But over the past couple of decades the U.S. economy has decayed and declined while the Chinese economy has skyrocketed.  Today, China makes more steel, more automobiles, more beer, more cotton, more coal and more solar panels than we do.  China has the fastest train in the world, the fastest computer in the world and they export twice as much high-tech equipment as we do.  In 2011, our trade deficit with China was the largest trade deficit that one nation has had with another nation in the history of the world, and China has now accumulated more than 3 trillion dollars in foreign currency reserves.  Every single day, we lose more jobs, more businesses and more of our national wealth to China.  In technical economic terms, China has “taken us out behind the woodshed” and has beaten the living daylights out of us.  Unfortunately, most Americans are so addicted to entertainment that they don’t even realize what is happening.

If you do not believe that China is wiping the floor with America in front of the rest of the world, just keep reading.  The following are 47 signs that China is absolutely destroying America on the global economic stage….

#2 America has lost more than a quarter of all of its high-tech manufacturing jobs over the past ten years.

#3 The Chinese economy has grown 7 times faster than the U.S. economy has over the past decade.

#4 In 2010, China produced more than twice as many automobiles as the United States did.

#7 China produced 19.8 percent of all the goods consumed in the world during 2010.  The United States only produced 19.4 percent.

#13 According to the Economic Policy Institute, America is losing half a million jobs to China every single year.

#14 The United States has lost a staggering 32 percent of its manufacturing jobs since the year 2000.

#15 The United States had been the leading consumer of energy on the globe for about 100 years, but during the summer of 2010 China took over the number one spot.

#16 15 years ago, China was 14th in the world in published scientific research articles.  But now, China is expected to pass the United States and become number one very shortly.

#17 China is also expected to soon become the global leader in patent filings.

#18 In 2009, the United States ranked dead last of the 40 nations examined by the Information Technology & Innovation Foundation when it came to “change” in “global innovation-based competitiveness” over the previous ten years.

#19 China now awards more doctoral degrees in engineering each year than the United States does.

#20 China now possesses the fastest supercomputer on the entire planet.

#21 China now has the world’s fastest train and the world’s most extensive high-speed rail network.

#22 The construction of the new $200 million African Union headquarters was funded by China.

#23 Today, China produces nearly twice as much beer as the United States does.

#24 85 percent of all artificial Christmas trees are made in China.

#26 There are more pigs in China than in the next 43 pork producing nations combined.

#27 China is now the number one producer of wind and solar power on the entire globe.

#29 Right now, China is producing more than three times as much coal as the United States does.

#30 China controls over 90 percent of the total global supply of rare earth elements.

#31 China is now the number one supplier of components that are critical to the operation of U.S. defense systems.

#33 The United States has lost an average of 50,000 manufacturing jobs a month since China joined the World Trade Organization in 2001.

#37 The new World Trade Center tower is going to be made with imported glass from China.

#38 The new MLK memorial on the National Mall was made in China.

#39 A Washington Post/ABC News poll conducted a while back found that 61 percent of all Americans consider China to be a threat to our jobs and economic security.

#40 According to U.S. Representative Betty Sutton, an average of 23 manufacturing facilities a day closed down in the United States during 2010.

#41 Overall, more than 56,000 manufacturing facilities in the United States have shut down since 2001.

#42 According to Professor Alan Blinder of Princeton University, 40 million more U.S. jobs could be sent out of the country over the next two decades.

#43 Over the past several decades, China has been able to accumulate approximately 3 trillion dollars in foreign currency reserves, and the U.S. government now owes China close to 1.5 trillion dollars.

#44 According to the IMF, China will pass the United States and will become the largest economy in the world in 2016.

#45 According to one prominent economist, the Chinese economy already has roughly the same amount of purchasing power as the U.S. economy does.

#46 According to Stanford University economics professor Ed Lazear, if the U.S. economy and the Chinese economy continue to grow at current rates, the average Chinese citizen will be wealthier than the average American citizen in just 30 years.

#47 Nobel economist Robert W. Fogel of the University of Chicago is projecting that the Chinese economy will be three times larger than the U.S. economy by the year 2040 if current trends continue.

If the global economy was a game, America would be losing very badly and China would have all the momentum.

Unfortunately, the global economy is not a game.  Very real businesses and very real jobs are affected by this every single day.

Barack Obama keeps talking about how “the economy is improving“, but the reality is that we have never even gotten close to where we were back before the financial crisis of 2008.

The following chart (which I pulled off a Fed website today) shows the average duration of unemployment in America.  Does this look like an economic recovery to you?…. 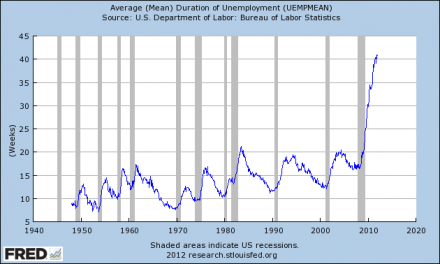 But the real story is the number of long-term unemployed workers we have in America today.

According to the Hamilton Project, approximately 53 percent of all unemployed workers in the state of Florida were out of work for more than six months during 2011.

But Barack Obama seems absolutely amazed that there are still so many unemployed people out there during his “economic recovery”.   Just check out the following interaction that took place between Obama and one concerned wife during a recent appearance by Obama on Google+….

“Can I ask you what kind of engineer your husband is?,” Obama said to the wife of the unemployed engineer.

“He’s a semiconductor engineer,” she responded.

“It is interesting to me — and I meant what I said if your send me your husband’s resume, I’d be interested in finding out exactly what’s happening right there because the word that we’re getting is that somebody in that type of high-tech field, that kind of engineer, should be able to find something right away.”

Obama does not realize that it is not so simple to “find something right away” in this economy.

We have been shipping high-tech jobs overseas at a blistering pace.  The jobs simply are not there anymore.

In Europe, unemployment is even worse.  Just check out this chart which shows what has been happening to youth unemployment in Europe recently.

These days, it is way too easy for big corporations to ship jobs over to places like China where it is perfectly legal to pay workers slave labor wages.

So unless something changes, that means that from now on there will be chronic structural unemployment problems in the United States.

That also means that the number of Americans dependent on the government is going to continue to increase.

And unfortunately, there are signs that the economy is about to experience another downturn.  Consumer confidence in the U.S. is falling once again.  The Baltic Dry Index, which is often used as a measure of the health of the world economy, has fallen more than 60 percent since October.

Perhaps most importantly of all, Europe (NYSEArca:VGK) is heading into a recession and several European nations are already experiencing depression-like conditions.

Considering the fact that half of all global trade involves Europe (NYSEArca:IEV) in some manner, that is not a good thing for us.

So if you have a job right now, you might want to hold on to it tightly.  Jobs are precious commodities at the moment, and they are going to become even more scarce in the years ahead.