Lighthizer’s comments “further increased the likelihood of a tariff step up,” Keith Parker, a strategist at UBS, said in a note. A full-blown trade war would shave off 45 basis points from global economic growth, while China’s GDP would take a hit of between 1.2% and 1.5%.

“We still see a trade war as low probability given the next tranche of tariffs would hit US consumer goods, but nevertheless it would have a big negative impact,” he said.

Trump’s tweets initially sent the market reeling on Monday. The Dow fell as much as 471 points while the Nasdaq dropped 2% at one point. However, equities rebounded to close well off their lows on news that a Chinese delegation would come to Washington for talks and as traders bet that Trump’s tweet was just bluffing.

But Lighthizer’s comments dashed those hopes. The selling on Tuesday accelerated after the Dow broke through Monday’s lows. 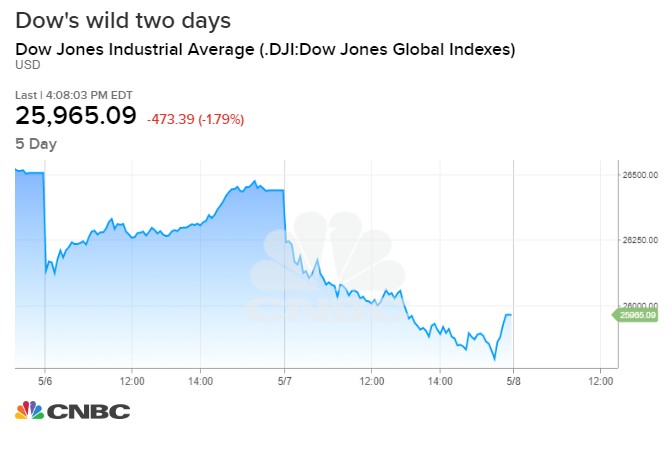 The Cboe Volatility Index, a measure of the 30-day implied volatility of the S&P 500 known as the “VIX” or the “fear gauge,” hit a fresh high of 21.09 on Tuesday, its highest level since January 22.

“I think this is a big masquerade by the administration. I think they’re preparing the market for the worst-case scenario but a trade deal is probably going to happen,” said Peter Cardillo, chief market economist at Spartan Capital Securities. “I still think we’ll get some sort of positive announcement on Friday.”

Chinese Vice Premier Liu He is expected to join a delegation in the United States this week. However, he will only attend the negotiations on Thursday and Friday. He was originally scheduled to attend negotiations Wednesday through Saturday.

“The Trump administration seems to have concluded that it is time to get it done. In other words, it’s either deal or no deal,” said Ed Yardeni, president and chief investment strategist at Yardeni Research, in a note. But “I expect that the US and China will settle their differences on trade issues sooner rather than later.”

Jeffrey Gundlach, CEO of Doubleline, is not so sure. He told CNBC’s “Halftime Report ” there is a better than 50% chance that Trump followsthrough on his treat to hike tariffs on Chinese imports.

“Both the premier of China and the president of the United States want to come across that they prevailed and didn’t give in,” he said.

In recent months, both China and the U.S. have indicated that trade talks were heading toward a resolution that would end the ongoing trade war between the world’s largest economies. Treasury Secretary Steven Mnuchin told The New York Times last month that negotiations were in the “final laps. ”

The positive news helped push the S&P 500 and Nasdaq to record highs this year. The indexes are up still up 15% and 20%, respectively. The Dow, meanwhile, is up 11%.

Villere sees the higher volatility as a buying opportunity, “but we’ve got to get through this trade war.”