Jim Bach: The term “death cross” has been making the rounds in financial headlines recently as the Russell 2000 has breached this technical indicator. 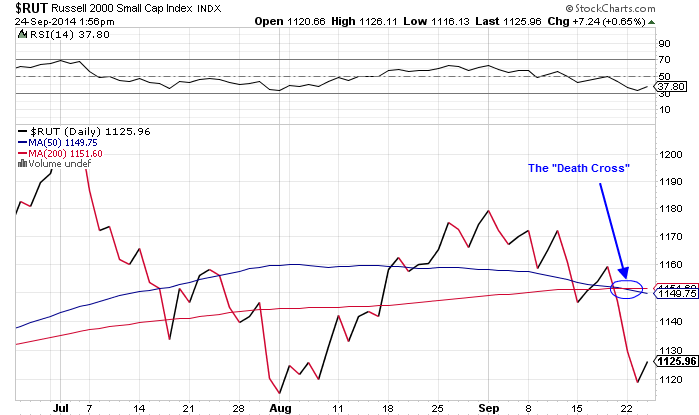 But for all the fear that surrounds the ominous death cross, what usually happens next shows it doesn’t actually warrant such a spooky moniker.

For seven out of those nine occurrences, the S&P actually finished above the level it traded at when the lines both first crossed, just before the 50-day moving average once again overtook the 200-day moving average and hit what is called the “golden cross” – the death cross’s bullish counterpart.

But first, here’s why traders fear the dreaded death cross…

Why Do Some Traders Fear the Death Cross?

To understand the cross, it’s important to first understand what the moving day averages tell us about market movements.

Generally, the moving averages provide a smoother trend-line that allows traders to determine exactly what direction the market is moving without the intraday volatility.

It is an average of closing prices over a certain timeframe. The 50-day moving average is calculated by taking the average closing prices of the last 50 days of trading.

After each day it is updated to reflect that day’s close, which is why it is called a “moving” average.

The shorter the time frame, the more sensitive that moving average will be to the intraday volatility. So the 50-day moving average will typically move more dramatically than the 200-day because a smaller sample of closing prices means each one has a larger weight on the final average. That’s why one day of decline is not typically cause for panic.

But when a decline in the 50-day moving average becomes so entrenched that it threatens the 200-day moving average, traders begin to worry. When these two averages cross, it indicates that the 50-day average is just a slight drop away from bringing down the longer-term trend line. When the much broader 200-day pattern dips, traders begin to fear that consistent declines are setting in.

“When the 200-day moving average does change direction it’s a bigger deal because it took so much to get that change,” Money Morning Resource Specialist Peter Krauth said.

But despite everyone’s fears, that has rarely been the case, at least over the last 20 years…