It’s been a frustrating few months for investors in the metals complex, with the pattern of rate-cuts being a boon for the gold price (GLD) coming to an abrupt end in late August. While the Fed’s pivot from being hawkish and the July rate cut put a fire under the precious metal, the September and October cuts have had a muted effect at best. Currently, gold is below the price it was trading at both cuts, and this seems to be grinding down the confidence among the bull camp. The even better news is that the recent push higher in gold has not led brought with it any enthusiasm, but instead, what seems to be skepticism about the recent rally. This is terrific news for those that were wise to pick up a position into the October weakness, as a dearth of bullish sentiment is precisely the fuel needed to power the metal higher. 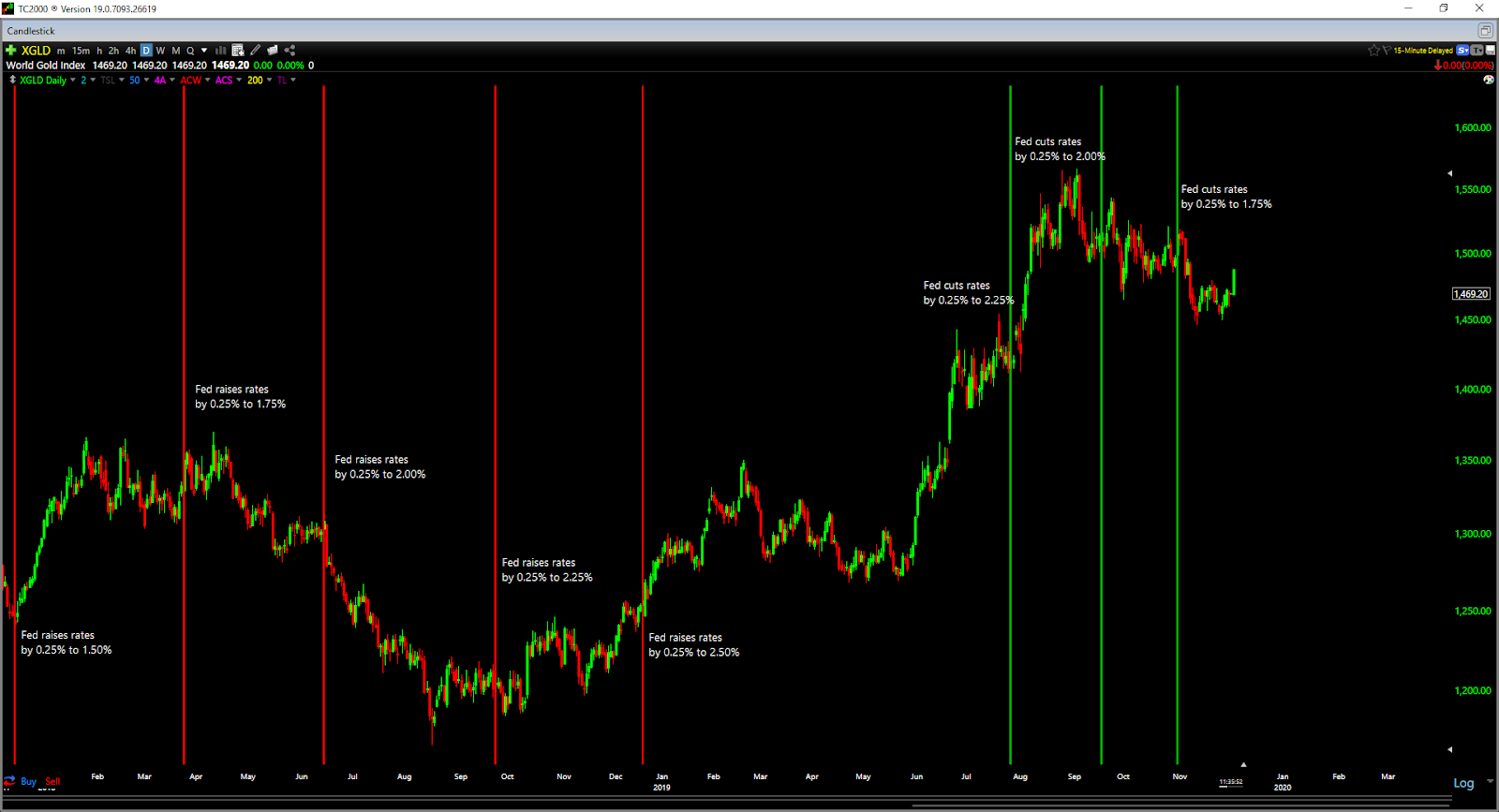 As the below image shows, rate-hiking cycles are generally a terrible time to own the metals, and the most recent rate-hike cycle was no different for gold. The metal had an invisible ceiling above it for nearly two years between mid-2017 and late 2018 while the Fed was trying to cool off inflation fears, and any sharp rallies were immediately sold. Since the Fed’s realization that they were being too aggressive in tempering inflation, we saw a relentless bid under gold, but a flood of bullish sentiment put a fork in the rally in late August. The good news is that the recent 7% correction has contributed to a complete sea change in attitude, and we’ve gone from extreme greed to a reasonable amount of fear. This is despite a completely normal run of the mill correction in the metal, a 7% pullback after a 20% parabolic rally. As we can see from the below monthly chart of gold, the metal continues to hover above its multi-year breakout level and looks to be building out a new base above this level. This pullback is anything but bearish, and what we would expect after a sharp rally higher. Bull markets are born on pessimism and grow on skepticism, and we are currently in the skepticism phase of this move, I believe. The fact that a 7% correction has been enough to transition sentiment from short-term euphoria back to skepticism is a great sign and shows just how beaten down the bulls have been in the 2012-2018 secular bear. 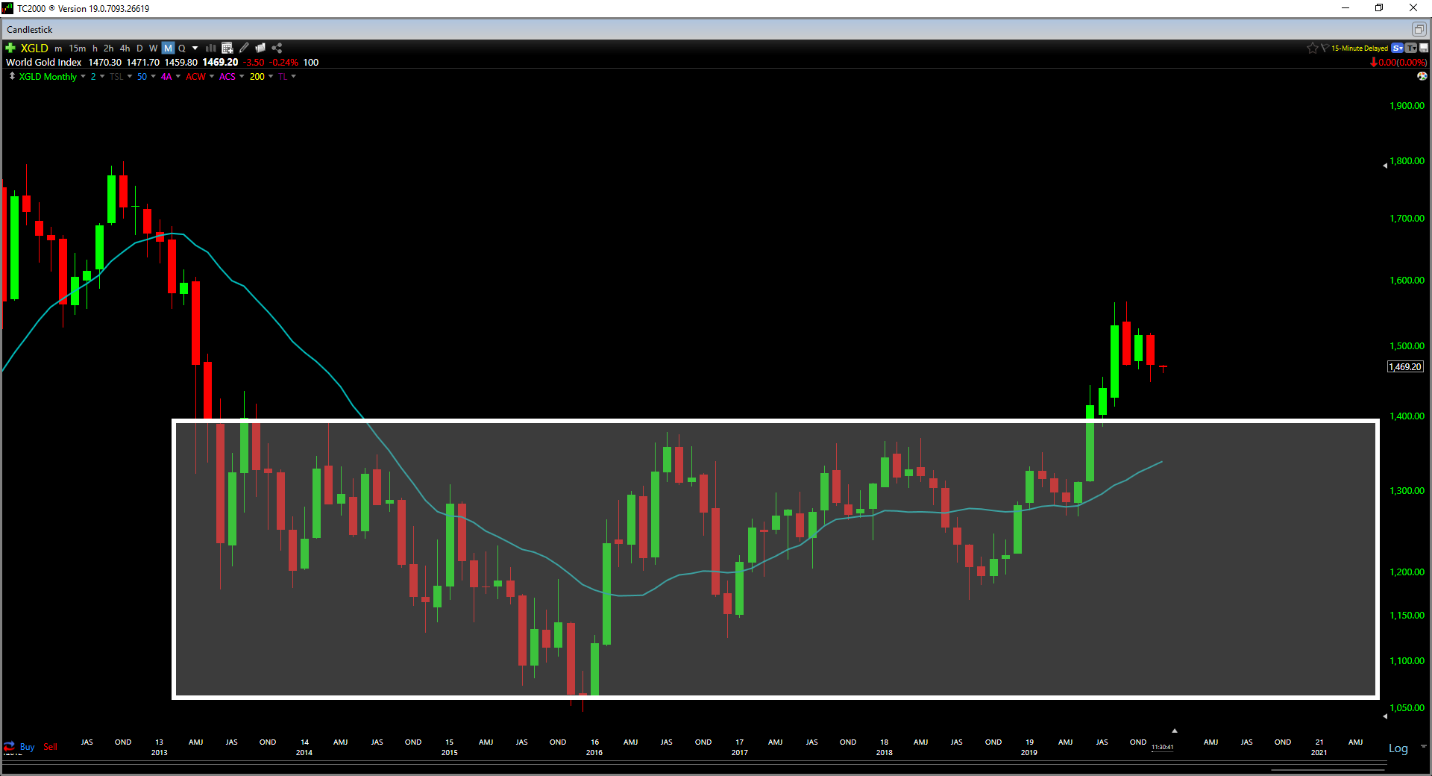 If we take a look at sentiment below, the long-term moving average for bullish sentiment (20 weeks) recently tagged the 80% bulls level, which told us that were roughly four bulls for every one bear in the market. However, the 3-month correction we’ve seen has allowed this reading to drop back down towards the 40% level, an area where we now have slightly more bears than bulls despite gold being up double-digits for the year. This is ridiculous, as it makes little sense to have bearish sentiment more prevalent than bullish sentiment while an asset is enjoying its best year in a decade on a year-to-date return basis. If gold can finish the year above $1,450/oz, this will be its strongest annual performance since 2010 on a closing basis.

If we zoom in to the shorter-term chart of bullish sentiment here, we can see that we finished yesterday at 32% bulls, and we really haven’t budged from the pessimism zone despite being 2% off of its lows. This suggests that most market participants are skeptical of the rally we are seeing, and still think a lower low is ahead. While a lower low is possible, I believe we have seen the worst of this correction, and believe that any drop towards $1,420/oz would likely get bought up with both hands by funds looking to add to positions. 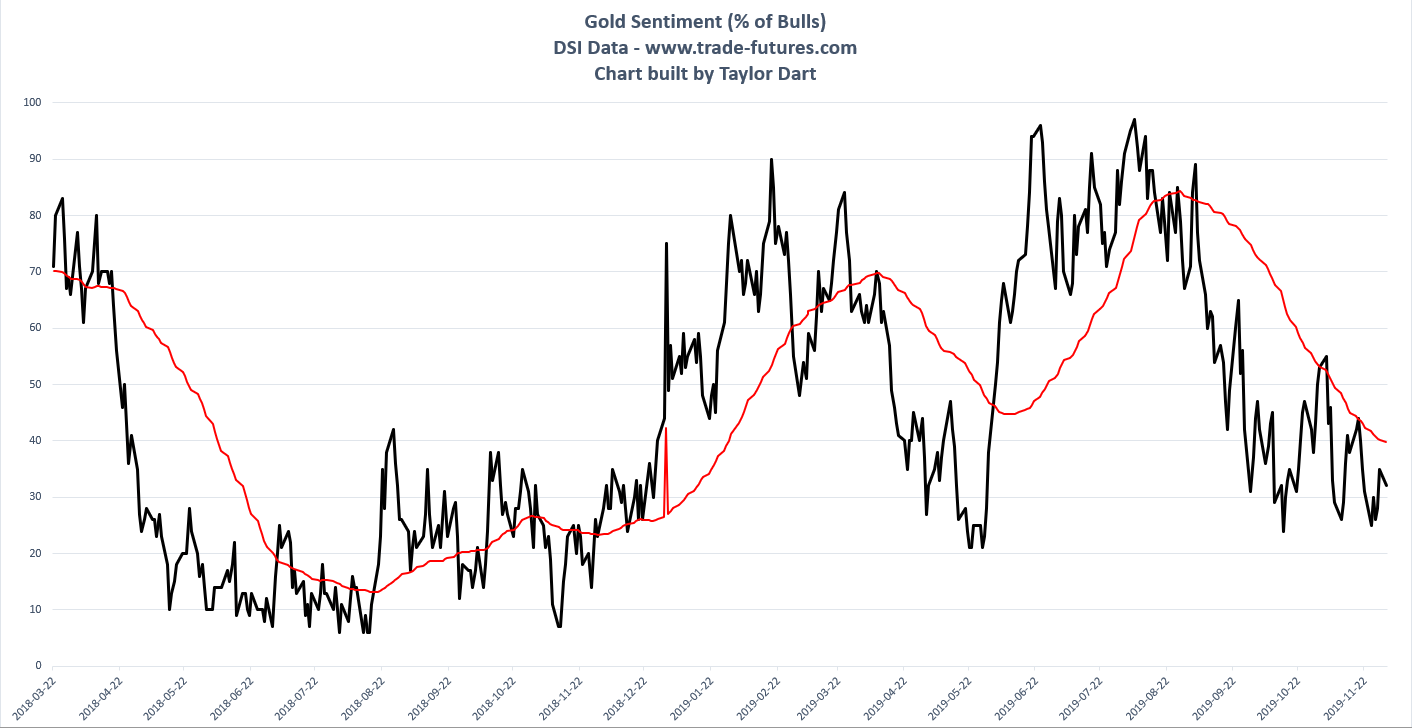 While gold has undoubtedly been one of the worst-performing assets the past two months, I believe those that are worried are missing the forest for the trees. There are no asset classes currently sporting a multi-year breakout like gold is, and a quick reset is entirely normal to shake weak hands out following these types of moves. I continue to remain bullish on gold, and would not be surprised if we saw new highs before June of 2020. A final drop into the seasonally weak period of the first half of December is a possibility, but I believe it would provide a buying opportunity. Therefore, as long as gold remains above $1,420/oz on a weekly closing basis, investors should treat any drops as noise.