While gold (GLD) and silver (SLV) have been busy consolidating since September after multi-month moves higher following the early summer rate-cut, palladium (PALL) has been in a world of its own. The metal is up 42% for the year and nearly 32% since its June lows. While bullish sentiment had remained relatively subdued during this Q3 rally, we’ve now seen the public jump on this move, and the trade begins to get crowded. Palladium sentiment finished yesterday at 88% bulls, and this was the highest reading in the past 18 months for the commodity. Based on this, I believe this is an opportune time to book some profits.

Palladium has seen a massive year due to tight supply constraints and growing demand from auto-makers. The commodity is expected to see record demand of nearly 9 million ounces this year, up roughly 5% from last year’s levels, and 6% from levels just eight years ago. This is the argument that the bulls keep trotting out to suggest why palladium should go higher into year-end, but they don’t factor in that the market often discounts or bakes things into price ahead of time. With one of the most impressive annual returns of any asset class in the past decade, I would argue much of this fundamental thesis is priced in here. 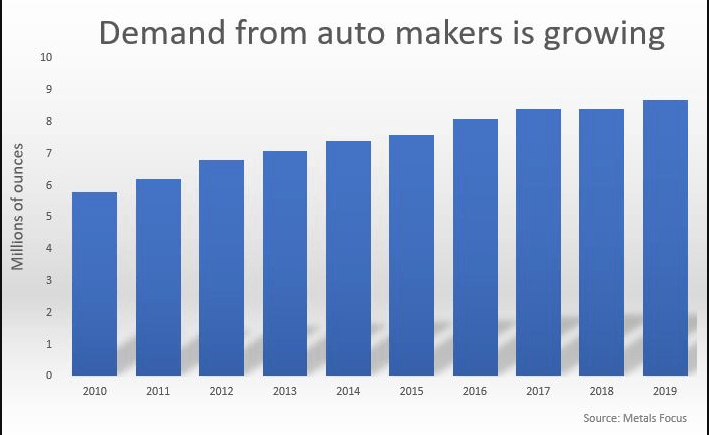 One of the best ways to judge whether something is priced into an asset class or stock is to examine sentiment for that stock or asset class. If the majority are bullish and the public is now in, it’s likely that the fundamental story has made its rounds and is discounted. Markets typically go up and power higher on doubt, extend further on disbelief, and then rally when everyone has finally realized why something has rallied that far. I believe we are near that tipping point on Palladium currently, with the ETF sitting above the $168.00 level.

Looking at a chart of sentiment below, we can see that sentiment is now in the extreme exuberance zone. It rarely pays to be greedy when we head into this zone, and generally, we can see corrections of 5% to 10% after this occurs. However, it is also possible that an asset can grind higher as greed begets greed, and things get even more frothy. Having said that, I never play for more upside once we’ve reached the exuberance zone. During instances where an asset class does continue higher, the fall is typically even worse, and any of that renewed upside gets retraced shortly after. 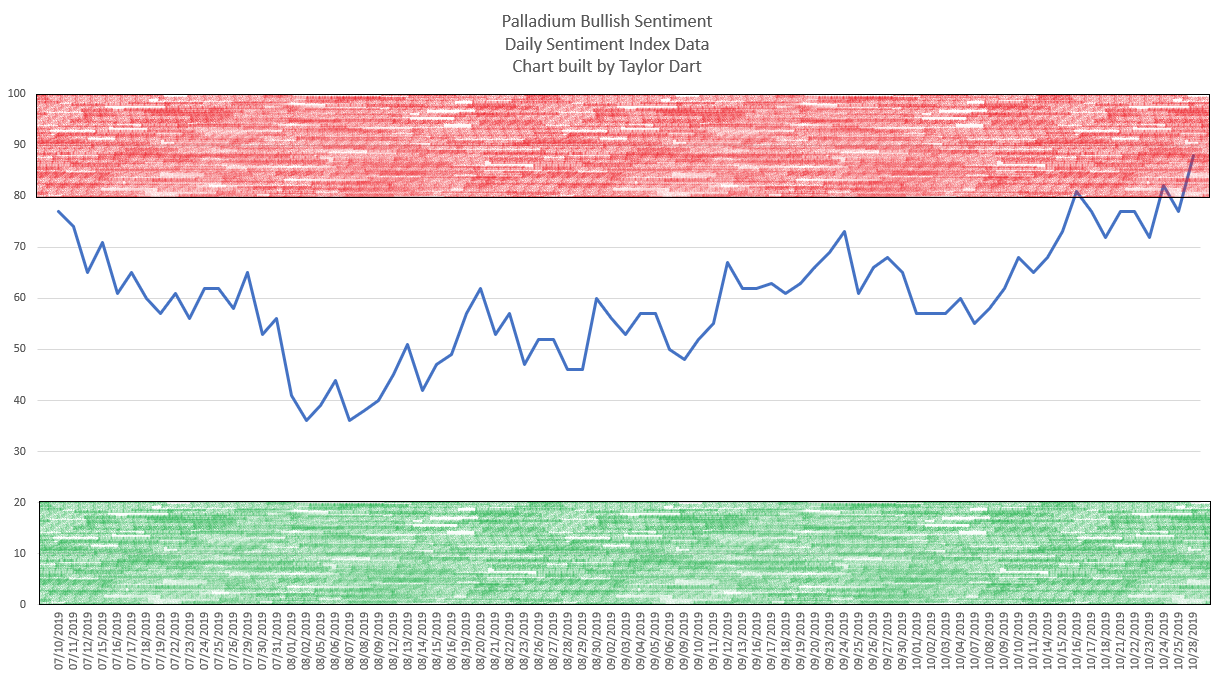 Moving to a daily chart below, we can see that palladium is more than 20% above its 200-day moving average, a similar level that ended the rally in Q1 of this year. Palladium then fell nearly 20%, and it did not pay to be greedy when everyone else was thinking the same thing. 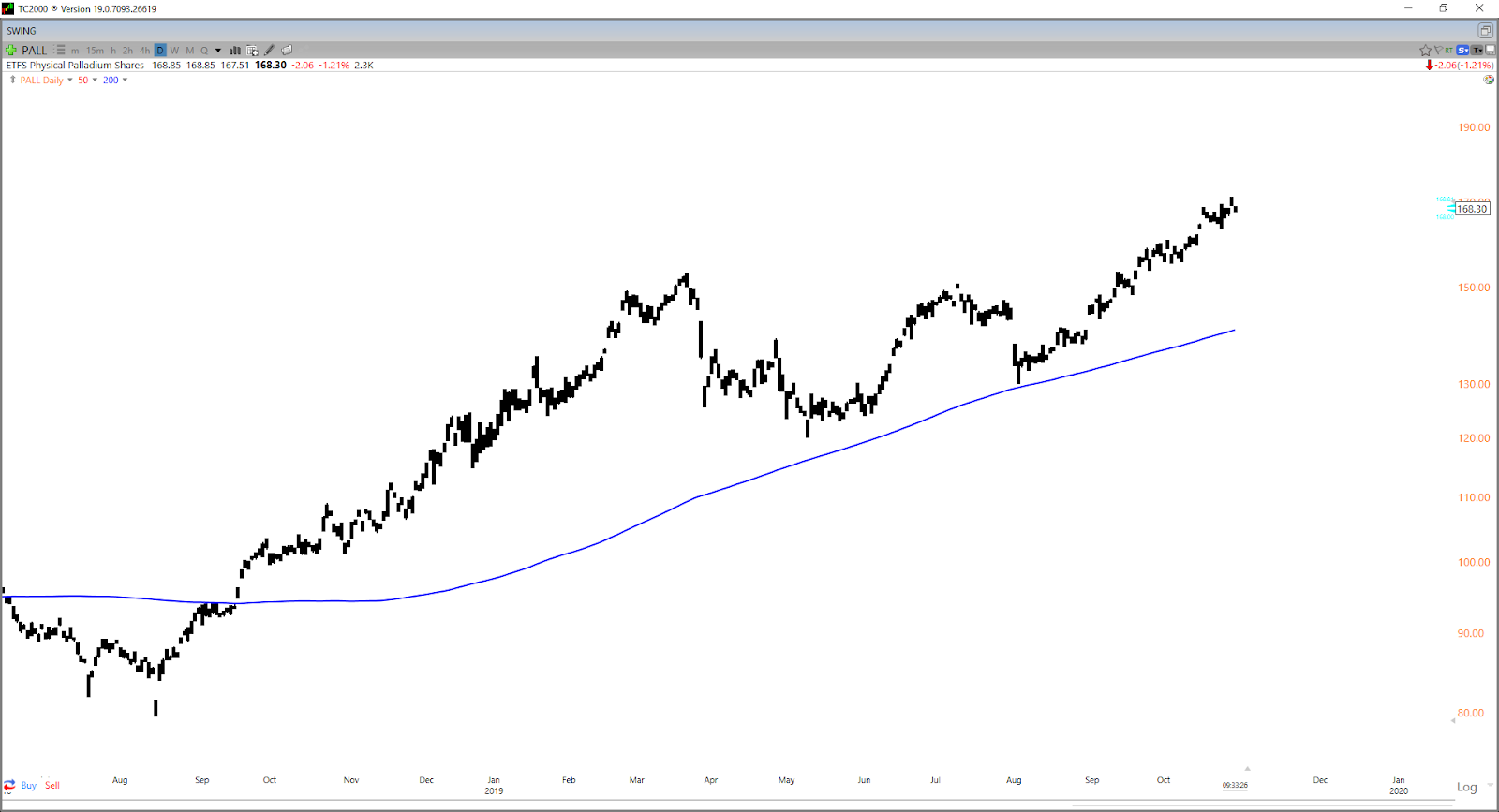 While palladium could undoubtedly go higher long-term as it’s broken out of a broad base, I would argue that the next 5% move is likely lower. Based on this, I see this as a prudent spot for traders to take some profits, and I would consider a further move higher above the $174.00 level on PALL as a potential short opportunity if we saw this before year-end. Currently, I have no position in palladium, but I am watching for a possible short if this mania continues. When everyone is in the pool, it’s time to get one’s towel and quietly exit before everyone else figures out it’s too crowded. I believe we’ve approached this point in palladium based on the extreme sentiment readings at Monday’s close.

PALL currently has an ETF Daily News SMART Grade of C (Neutral), and is ranked #19 of 33 ETFs in the Precious Metals ETFs category.