China A-shares are still light years away from their June 12, 2015 peak. But as long as the locals are buying in on Xi Jinping outwitting President Trump, and Wall Street bets on more stimulus, Shanghai and Shenzhen indexes will remain in beast mode. Forget weaker growth. Investors are long China. It surpassed Brazil as the darling of global investors roughly four weeks ago.

Why are mainland Chinese equities in a bull market despite a trade war and lower GDP forecasts out of Beijing?

First off, China’s stock market always gets carried away just before indexers MSCI are announcing whether to add more to the weight of mainland equities in their biggest indexes. They did that in late February, which is when China’s local stock market beat Brazil, once a world leader for 2019.

Another reason that’s not often written about is that the People’s Bank of China has been somewhat quietly supporting the local equity market, buying up shares as if taking a cue from their colleagues at the Bank of Japan.

Last but not least, Wall Street has basically doubled-down on President Trump throwing in the towel on tariffs. Everyone is happy, except for China hawks and bears. 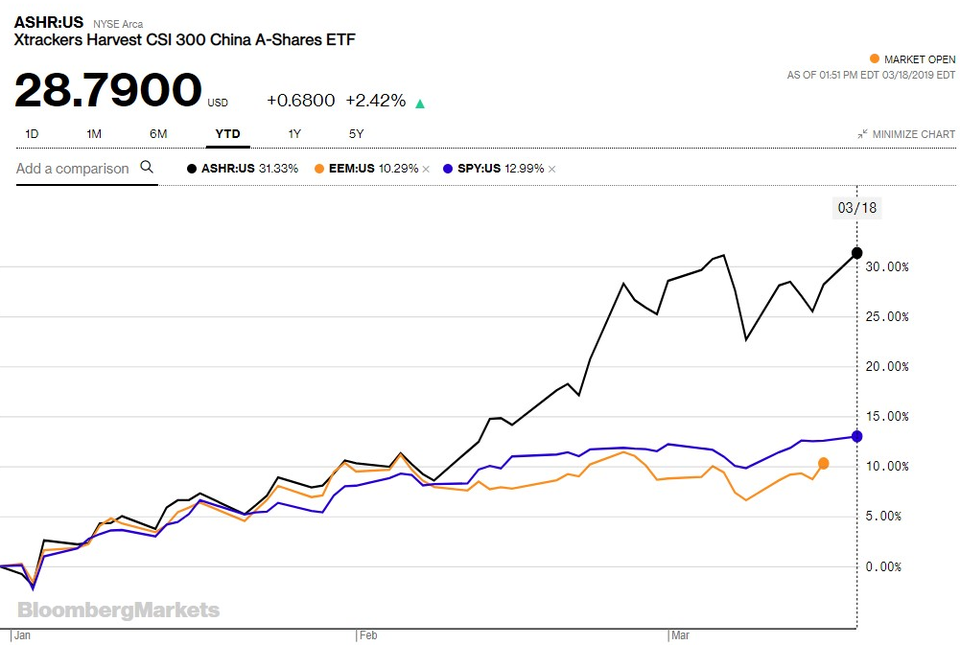 China’s economy is slowing, but not drastically. Every China investors have seen these numbers before in the economic data regarding things like industrial production and retail sales.

The hard landing has been postponed for the umpteenth time. And while the short-sellers are bellyaching for a financial crisis to finally unfold, forcing China to hit the skids and crash like something never seen before, the rest of the world is starting to build positions in the country, portfolio positions that have been massively underweight for years. As funds go from underweight to at least neutral, coupled with the increased inclusion factor for the A-shares in the MSCI China and MSCI Emerging Markets Index, more money is mandated to be in China. China’s Frankenstein economy, one-half communist, one-half capitalist, keeps trodding along, one shoe two sizes bigger than the other, but never too cumbersome to keep it from getting where this economic monster wants to go.

No one thinks the second quarter will be as good as the first. There is less upside.

“Markets have not fully priced a complete rollback of all existing tariffs and that could be a positive surprise, but we think most of the positive news is already in the price,” says Ed Al-Hussainy, senior interest rate and currency analyst at Columbia Threadneedle.

Tariffs on $200 billion worth of Chinese imports are not moving from 10% to 25% as scheduled to happen on March 1. Both sides agreed to extend the 90-day trade truce agreed upon in November at the G-20 Summit in Buenos Aires. It also appears certain that Trump’s early threat to tariff all imports from China is off the table. The main question for investors is whether the earlier tariffs of 25% on $50 billion of Chinese imports will be reduced, or if some or all of the imports facing 10% duties will be rolled back. Last week, Barclays Capital economist Jian Chang predicted tariffs would return to pre-trade-spat levels.

China announced more economic stimulus, including what looks like forced credit for small and midsize companies. Chinese Premier Li Keqiang said last week that state-owned banks had to do more to lend to small and mid-cap companies.

On Friday, he announced that the VAT tax cut would go into place on April 1, which is a bit earlier than expected.

China earnings season has begun. Investors will be looking for signs of wear and tear from external and internal forces. Is the trade war hurting the bottom line or is China’s economy slowing more than we thought? Some firms might be hurt by both issues.

Most investors expect China to slow precipitously until there is more stimulus at some point in the second half. If earnings come in below market expectations, there is a high chance stimulus is increased. More stimulus puts a floor on Chinese stocks. Investors should be prudent on stimulus this time around, however, because President Xi Jinping has said numerous times that he is not interested in propping up real estate markets, an important economic driver. Real estate development has often led to oversupply and high credit risks.

“We still think there will be a few more months of economic darkness before the light at the end of the tunnel is visible,” says Aidan Yao, senior economist for AXA Investment Managers. “Even when that happens, the response will likely be a mild recovery … given Beijing’s more cautious stimulus this time.”

Part of Monday’s 2.5% rise in the China CSI-300 A-Shares ETF was pinned on the on-again, off-again meeting between Trump and Xi. Once set for March, then April, the meeting is now reportedly happening in June.

Based on interviews with global portfolio managers and senior economists from major investment banks, the consensus view holds that the trade war won’t end, but that the tariff war will–and that’s good enough. Taking tariffs off the table is a risky political move for Trump. Tariffs brought China to discuss age-old concerns like subsidies.

The U.S. also wants guarantees regarding intellectual property protection and legal fairness in China, along with enforcement on certain matters like currency. China does not have a free-floating currency. Any purposeful devaluation strategy by the central bank there would make tariffs moot. A weaker renminbi would absorb the extra cost.

In the battle of trade war wits, Xi is the last man voted off the island and is the sole survivor. It’s a matter of two different political systems. Trump has a little under two years left. Maybe six if he is lucky. Xi, meanwhile, is there unless there is a shocking palace coup in Beijing or he becomes incapacitated due to age and poor health.

The A-share market, therefore, sees Xi outlasting and perhaps even outwitting Trump, to borrow from the reality game show Survivor.

Politically, if Trump’s “great deal” removes tariffs from Washington’s strategy and the main focus turns to a fight between Silicon Valley and China’s new Greater Bay Area, then such a move undermines his campaign promise to protect American manufacturing jobs. Manufacturing firms would be forced into World Trade Organization arbitration, hoping they can hit their Chinese rivals on anti-dumping rules.

“So long as there is no news to undercut the ‘Xi plays Trump’ narrative, there seems little to stop the A-share rally,” says Brian McCarthy, chief strategist for Macrolens, a big picture investment research firm. “That said, the news of late has not been supportive of the consensus view that a large stimulus is still in the pipeline.”

A-shares are basically priced for two things: Xi caving on more credit stimulus and Trump caving on his tariff war.

FXI currently has an ETF Daily News SMART Grade of C (Neutral), and is ranked #8 of 38 ETFs in the China Equities ETFs category.