Natural gas has a long history as one of the most volatile commodities when it comes to its price action. Since the NYMEX first began trading the combustible energy commodity, the price has ranged from $1.02 to $15.65 per MMBtu. Recently, it has been trading a lot closer to the bottom of that trading range than the top.

Seasonality is a critical factor for many commodity markets, and natural gas is no exception. Over the past week, the price has climbed from under $2.20 to almost $2.40 per MMBtu. The uncertainty of the weather conditions across the United States during the peak season of demand has caused natural gas to move to the upside even though inventories have been climbing.

The United States Natural Gas Fund (UNG) is the most liquid ETF product that replicates the price action in the energy commodity. The UGAZ and DGAZ ETNs turbocharge the price action on the up and the downside on a percentage basis and are extremely popular for those looking to magnify the price volatility in the futures arena.

The price got too cheap

Nearby natural gas futures fell to a low at $2.029 per MMBtu in early August, and by mid-September, the price rose to a high at $2.71. The recovery took the energy commodity 33.6% higher.

Natural gas ran out of upside steam at over $2.70, and the price corrected to the downside. 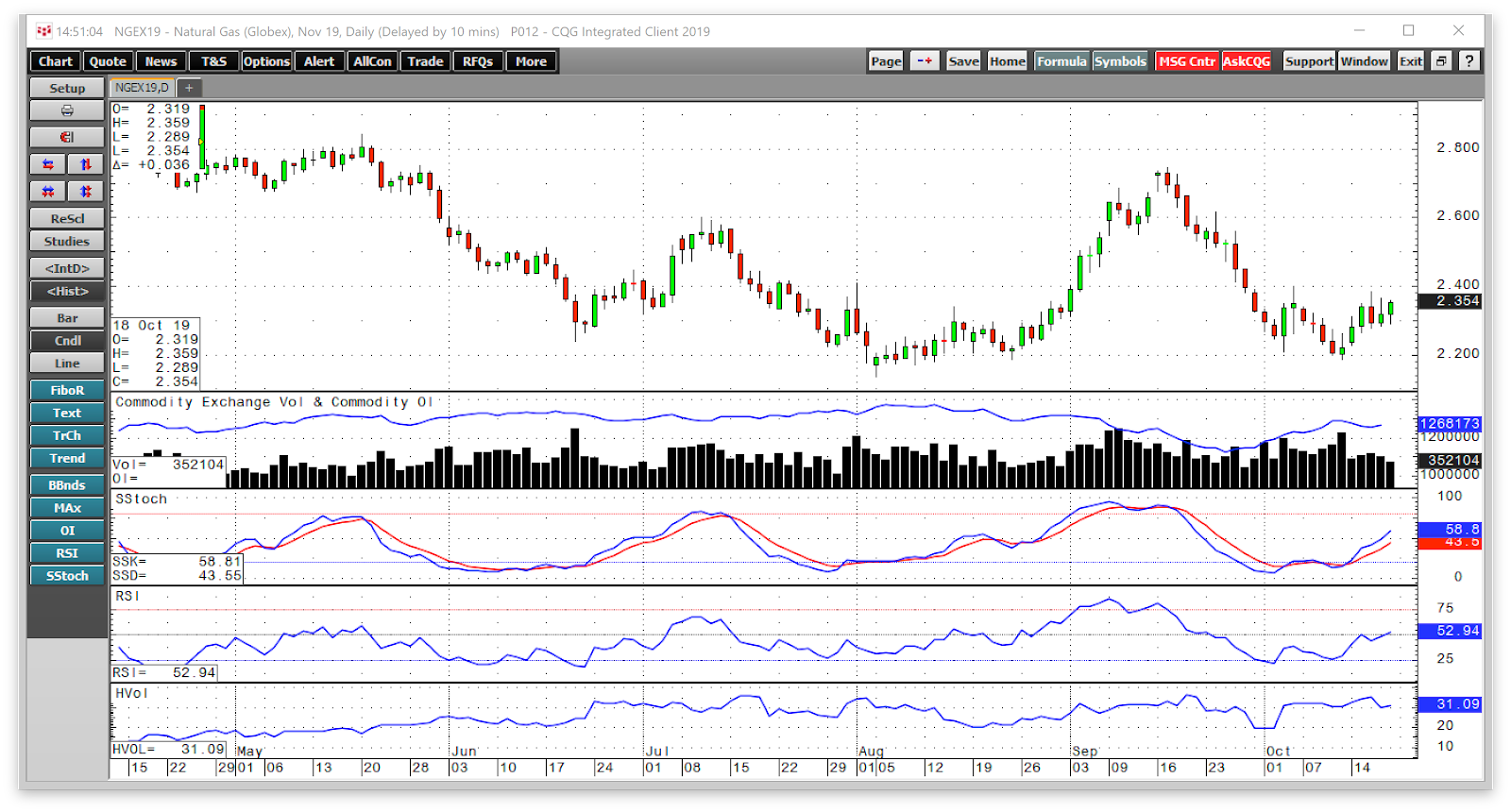 As the daily chart of November NYMEX futures shows, the price dropped to a low at $2.187 on October 11. In last week’s article on ETF Daily News, I wrote that the price fell too far. With the peak season of demand starting in mid-November, the uncertainty of the average temperatures over the coming months is a reason why natural gas became far too cheap at under the $2.20 level. Over the past week, the price recovered and settled on Friday, October 18, at $2.32 per MMBtu after trading to a high at $2.384 on October 16. Price momentum and relative strength indicators crossed higher in oversold territory. Both metrics were in neutral territory at the end of last week, which tells us that there could be more room on the upside for the price of the energy commodity.

Inventories keep climbing, but not for long

Last Thursday, the Energy Information Administration reported that stockpiles of natural gas in storage around the US rose by 104 billion cubic feet for the week ending on October 11. There were 3.519 trillion cubic feet in storage as of the most recent data release. Stockpiles are already significantly above last year’s peak level, which was at 3.247 tcf and were 16.3% above last year and 0.40% above the five-year average as of October 11.

Meanwhile, stocks rose above the five-year average for the first time last week. However, the price did not fall, which was a sign of underlying support for the energy commodity.

There are approximately four weeks left in the 2019 injection season. Stockpiles will likely rise to between 3.8 and 3.9 tcf when the withdrawal season begins. In 2015 and 2016, inventories peaked at over four tcf. We are not likely to see them rise to a record level this year as injections typically decline towards the beginning of the winter season in the US.

At least one attempt to reach $3 per MMBtu

The January natural gas futures contract was trading around the $2.65 per MMBtu level last Friday. January is the peak season for heating demand.

The uncertainty of the winter season could cause at least one rally to challenge the $3 level over the coming weeks, which is over 13% above the price at the end of last week.

Price volatility in the natural gas futures arena tends to increase as injections end, and withdrawals from storage commence each year. In November 2018, the price rose to a high of $4.929 per MMBtu. However, inventories are at a level making a repeat performance unlikely. Meanwhile, volatility in the natural gas market will mean that there are more trading opportunities over the coming weeks. The UGAZ and DGAZ ETN products are short-term tools that magnify the price action on the up and downside in the natural gas futures arena. I would only use these tools for very short-term risk positions as the leverage comes at a price, which is time decay. At just over $2.30 on the November contract and the $2.65 per MMBtu level on January futures, natural gas is still at levels where risk-reward favors the upside coming into the peak season for demand.