From Clive Maund: There were several developments last week that taken together suggest that the short-term bearish scenario set out in the Gold and Silver Interim update about a week ago is not going to materialize and instead that the original grander scenario described in the last full Silver Market update is going to prevail. This is a relief because any further downside would have ruined the giant positive pattern completing on the long-term charts, especially that completing in gold.

What are these developments? There were three main ones. The first is that last week a run of bullish long-tailed candlesticks appeared on silver’s chart, which we can see to advantage on its 1-month chart below. They are bullish because they indicate that the market is rejecting lower prices and show that buyers were snapping at silver whenever it dipped. This past week was also characterized by a run of dojis (open and close almost at the same price), which is a sign of indecision and is bullish if they occur after a significant drop, which they did. In addition there were two distinctly bullish candlesticks last week, a bull hammer on Tuesday and a dragonfly on Thursday. 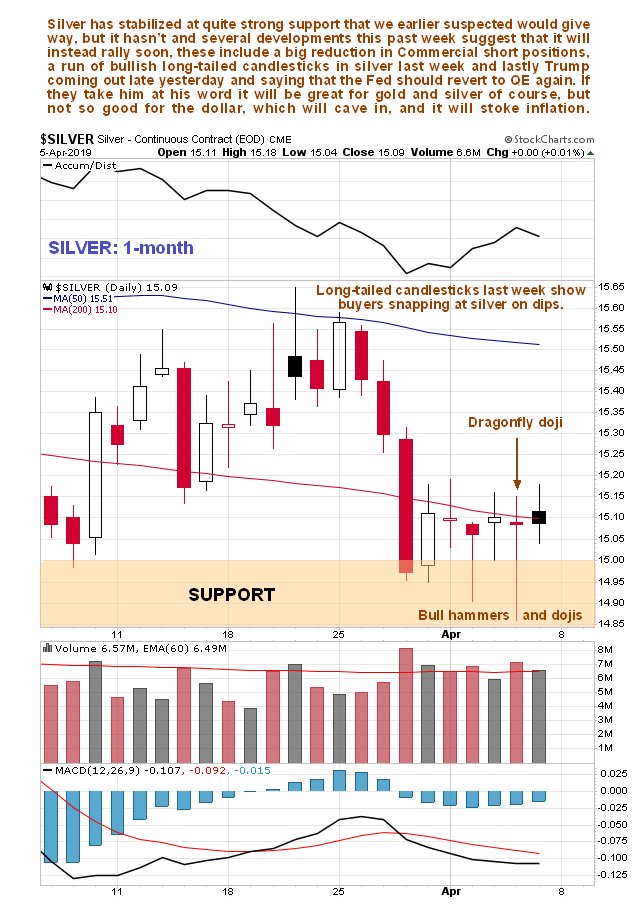 The second important development last week is that there was a big improvement in silver’s COT structure, with the Commercials scaling back their short positions substantially and the Large Specs their long positions. While positions are not at levels that can be described as all-out bullish, they have certainly moderated sufficiently to permit a significant rally at any time. 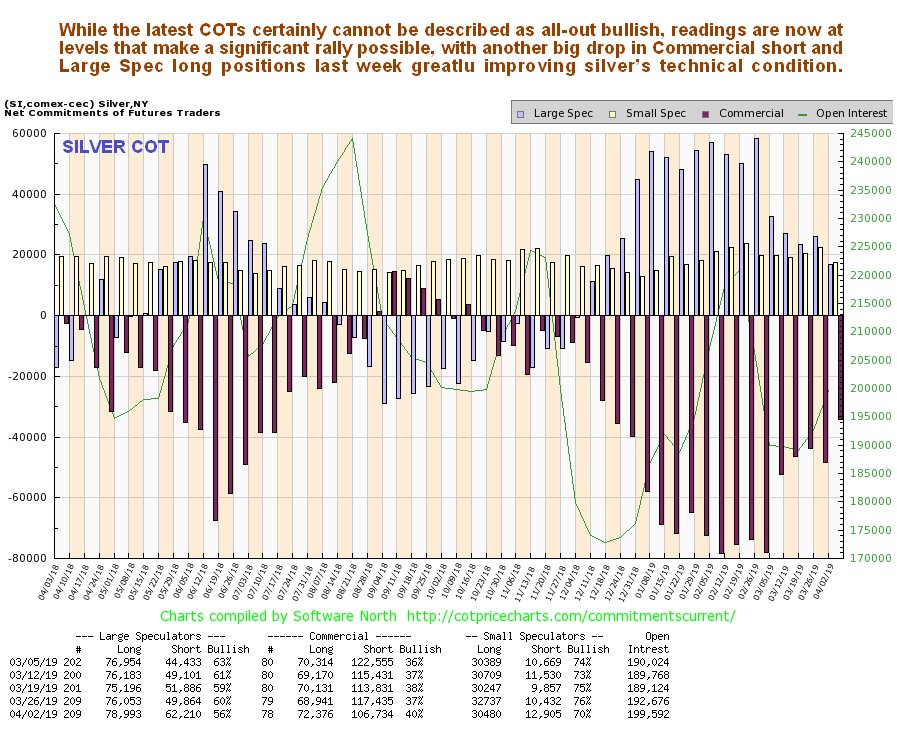 Click on chart to pop-up a larger, clearer version.

The third significant development is that Trump declared after Friday’s close that the Fed should revert to QE again, meaning QE4. If they take him at his word the dollar is going to suffer terribly this time round, which will ramp up inflation–good news for gold and silver.

Now let’s swiftly review the other charts, the most important of which as we will see is the 15-month silver chart.

Starting with the 8-month chart you can see the potential Head-and-Shoulders top which got us worried. Although it looks too steep to be valid, there is a parallel flat-bottomed one in gold, which lent this one validity, especially as the volume pattern up to a week ago had been negative. On the plus side the appearance of a string of long-tailed candlesticks at important support last week certainly looks positive, and the flip side of the recently weak momentum (MACD) is that silver is now somewhat oversold with plenty of upside potential. 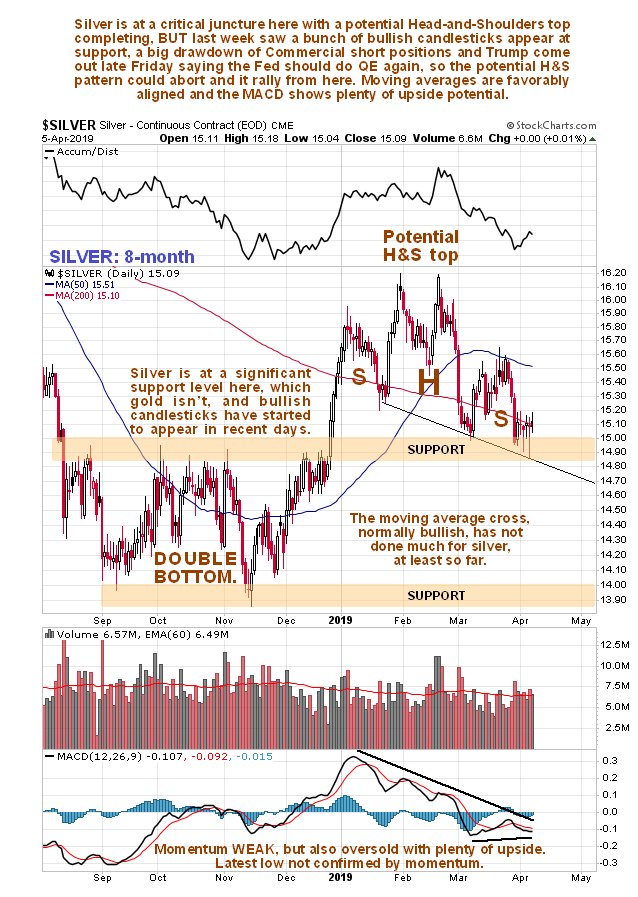 But it is the 15-month chart that really “gives the game away” for this chart shows, as it did when we first identified this pattern back early in March in the last full Silver Market update, that silver is completing a large Cup & Handle base pattern, and that the drop of recent weeks fits neatly within the boundary of the Handle of the pattern that we had earlier delineated, meaning that the further drop of recent weeks can fairly be described as “a storm in a teacup,” or to be perfectly accurate, “a storm just outside a teacup.” What is interesting is that the latter part of the drop last week terminated exactly at the point described as the probable low point for the Handle back in the early March update. Thus, if silver turns up here as it looks like it will, all well and good and it should then proceed to advance to the resistance at the upper boundary of the pattern at about $16.20 and then in due course break out from the entire base pattern, which looks likely to synchronize with gold breaking out above its key $1,400 level. 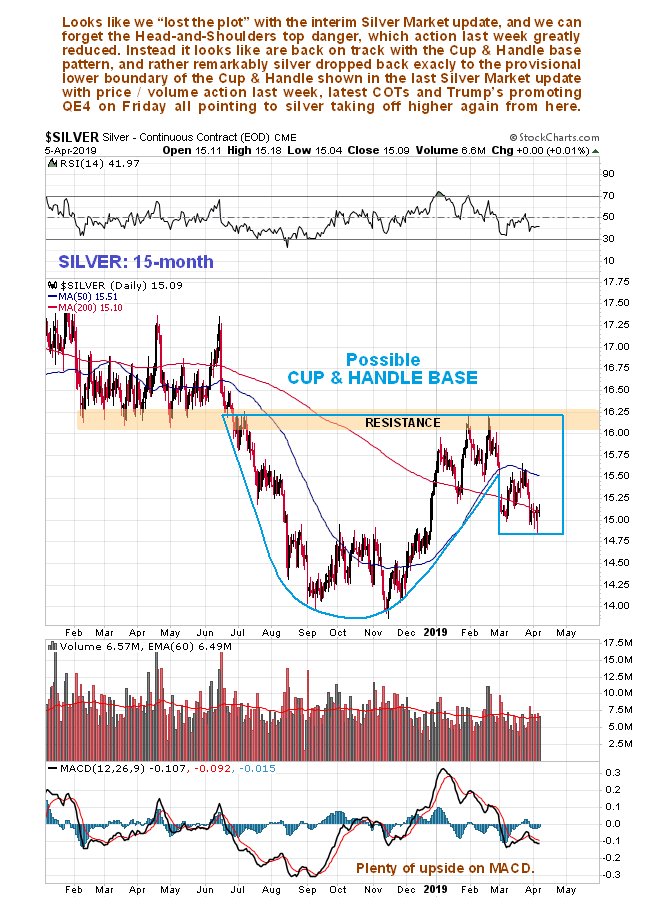 Finally, we will end by briefly reviewing silver’s long-term 10-year chart which looks rather more messy than gold’s on which there is a fine giant Saucer base pattern. On silver’s chart in contrast we see that instead of a Saucer pattern, it appears to have marked out a giant Double Bottom, with the second low of the Double Bottom being composed of the Cup and Handle base described above. As we can see by comparing this with the 10-year chart for gold in the parallel Gold Market update, silver is much closer to its lows of recent years than gold is. This is normal for this stage of the cycle, as at the end of major precious metals sector bear markets, or in the early stages of bull markets investors favor gold over silver, which they see as more risky, which is what attracts them more to silver toward the peak of the cycle when they are less risk averse. 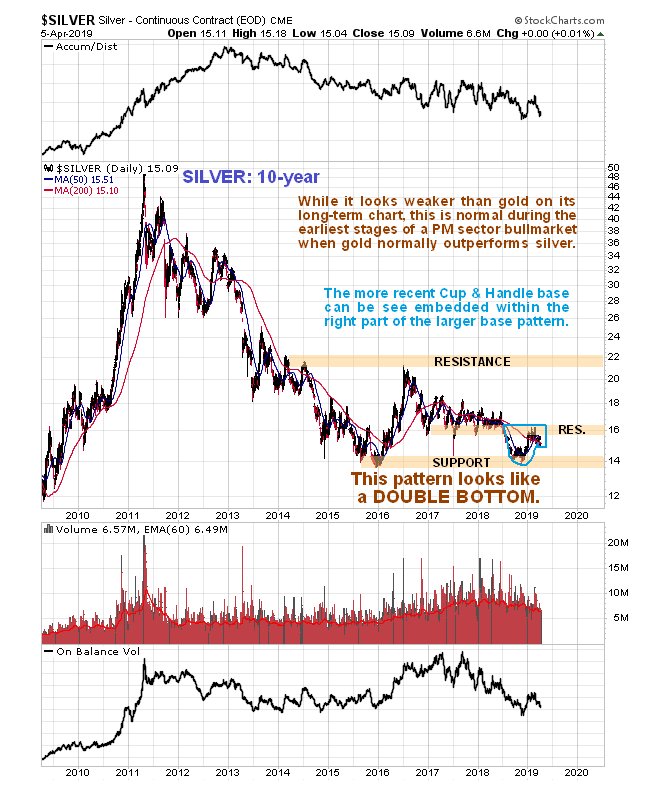 Originally posted on CliveMaund.com on April 7.

Clive Maund has been president of www.clivemaund.com, a successful resource sector website, since its inception in 2003. He has 30 years’ experience in technical analysis and has worked for banks, commodity brokers and stockbrokers in the City of London. He holds a Diploma in Technical Analysis from the UK Society of Technical Analysts.

Disclosure:
1) Statements and opinions expressed are the opinions of Clive Maund and not of Streetwise Reports or its officers. Clive Maund is wholly responsible for the validity of the statements. Streetwise Reports was not involved in the content preparation. Clive Maund was not paid by Streetwise Reports LLC for this article. Streetwise Reports was not paid by the author to publish or syndicate this article.
2) This article does not constitute investment advice. Each reader is encouraged to consult with his or her individual financial professional and any action a reader takes as a result of information presented here is his or her own responsibility. By opening this page, each reader accepts and agrees to Streetwise Reports’ terms of use and full legal disclaimer. This article is not a solicitation for investment. Streetwise Reports does not render general or specific investment advice and the information on Streetwise Reports should not be considered a recommendation to buy or sell any security. Streetwise Reports does not endorse or recommend the business, products, services or securities of any company mentioned on Streetwise Reports.
3) From time to time, Streetwise Reports LLC and its directors, officers, employees or members of their families, as well as persons interviewed for articles and interviews on the site, may have a long or short position in securities mentioned. Directors, officers, employees or members of their immediate families are prohibited from making purchases and/or sales of those securities in the open market or otherwise from the time of the interview or the decision to write an article until three business days after the publication of the interview or article. The foregoing prohibition does not apply to articles that in substance only restate previously published company releases.

Charts provided by the author.

CliveMaund.com Disclosure:
The above represents the opinion and analysis of Mr Maund, based on data available to him, at the time of writing. Mr. Maund’s opinions are his own, and are not a recommendation or an offer to buy or sell securities. Mr. Maund is an independent analyst who receives no compensation of any kind from any groups, individuals or corporations mentioned in his reports. As trading and investing in any financial markets may involve serious risk of loss, Mr. Maund recommends that you consult with a qualified investment advisor, one licensed by appropriate regulatory agencies in your legal jurisdiction and do your own due diligence and research when making any kind of a transaction with financial ramifications. Although a qualified and experienced stock market analyst, Clive Maund is not a Registered Securities Advisor. Therefore Mr. Maund’s opinions on the market and stocks can only be construed as a solicitation to buy and sell securities when they are subject to the prior approval and endorsement of a Registered Securities Advisor operating in accordance with the appropriate regulations in your area of jurisdiction.