EconMatters: In an unprecedented move to fight off the threat of deflation, ECB cut its main interest rate to near zero at 0.15%, and its interest rate on deposits to a negative 0.1% for the first time. This means ECB will now be charging banks 0.1% to hold their reserves.  ECB hopes these aggressive measures would spur banks to ramp up lending, and also weaken the euro. France has long been arguing that high euro exchange rate is holding back the economic recovery in the Euro Zone.

ECB and the U.S. Fed essentially have the similar Keynesian idea: Central Bank’s act of reducing interest rates and increasing money supply would discourage saving, stimulate spending and demand for goods, services and improve bank balance sheets and banks’ capacity to lend.  This sounds nice in the context of Keynesian Economics; however, it has not worked quite that way in the U.S. despite Fed’s massive money printing operation since 2008, an observation I’m sure Draghi ‘overlooked’ trying to repeat the proven ineffective steps of the Fed.

Conventional wisdom had many concerned about run-away inflation because of the $3.5-trillion injected by the Fed into the economy, but that did not really materialize.  In fact, up till the two most recent hot CPI and PPI reports, one major anxiety of the Fed was that the U.S. would fall into a prolonged Japanese-style deflation.

Some economists believe the disinflation seen in the U.S. is mostly due to weak demand commonly seen during an economic recovery. A blog published in April by the St. Louis Fed noted that as money supply (M0) increased 40.29% between December 2008 and December 2013, or about 8% per year on average, inflation should run at a pace of 4.3% per year.  But this did not happen.  St. Louis Fed posits that the liquidity trap could be an “alternative explanation for the generally unanticipated disinflation or low inflation levels”.

Liquidity trap is a situation characterized by interest rates that are close to zero and fluctuations in the money supply that fail to translate into fluctuations in price levels.  One cause of the liquidity trap is cash hoarding because people expect a crisis event such as war or market crash.  As the St. Louis Fed describes it:

“During a liquidity trap…., increases in money supply are fully absorbed by excess demand for money (liquidity)….if money demand increases more than proportionally to the change in money supply due to the downward pressure LSAPs [Large Scale Asset Purchases] exert on the interest rate, the price level must fall to absorb the difference between the supply and demand of money.”

As we can see in the chart below, Personal Saving Rate spiked during the post-crisis recession period, and has remained higher than pre-crisis levels ever since.  In addition to consumers, American companies are also building up liquidity and holding onto record $5 trillion in cash.  This seems to support St. Louis Fed’s position that low interest rate may have induced the flight to cash thus increasing the demand for money. 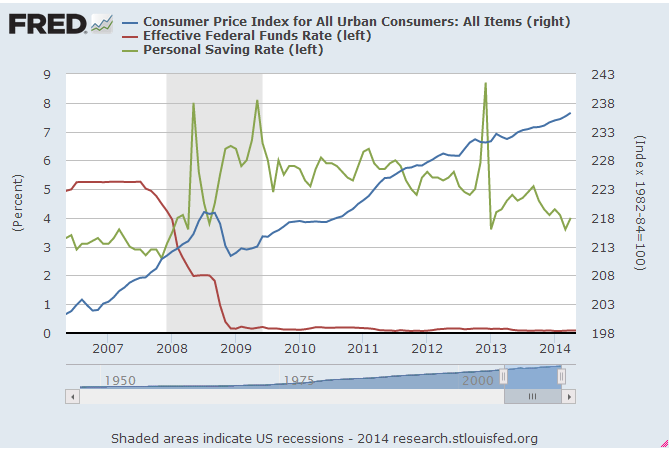 In our view, another major factor to the slow growth/low inflation in the U.S. is that Fed’s ultra low near-zero interest rate actually incentivizes the Wall Street Yield Trade — using the free money from the Fed to buy up Treasury for a risk-free profit delta bidding up Treasury prices while pushing down Yield.