Toby Connor: I was confident that the Fed had already begun printing. That seemed quite evident by the overall action in the commodity markets, the dollar (NYSEARCA:UUP), and the fact that stocks were unable to correct in the normal timing band for a daily cycle low. However, I didn’t really expect Ben would come out and publicly admit it. That one took me by surprise Thursday. I guess Bernanke wants to get full value for his attack on the dollar and make sure that markets are rising into the election.

At this point all the pieces are in place for the inflationary spike and currency crisis I’ve been predicting for 2014. We now have open ended QE that is tied to economic output and unemployment. But since debasing currencies has historically never been the cure for the bursting of a credit bubble, all the Fed is going to produce is spiraling inflation. So as this progresses we are going to see the Fed printing faster and faster as the result they are looking for never materializes. This is what will ultimately drive the currency crisis at the dollar’s next three year cycle low in 2014.

At this point, watch the price of oil (NYSEARCA:USO) if you want to know when the next recession is going to begin. As I’ve pointed out many times in the past, recessions (well, at least since World War II) have all been preceded by a sharp spike in the price of energy. Any move of 100% or more in a year or less, has historically been the straw that breaks the camel’s back. Modern economies cannot survive that kind of shock. It invariably triggers the collapse of consumer discretionary spending and economic activity comes to a grinding halt.

In 2007 oil surged (NYSEARCA:DBO) out of the 3 year cycle low into a parabolic advance as Bernanke trashed the dollar in the vain attempt to halt the sub-prime collapse. That 200% spike in oil is what tipped the economy over into recession, which was then magnified in the fall of `08 as the financial bubble and debt markets imploded. 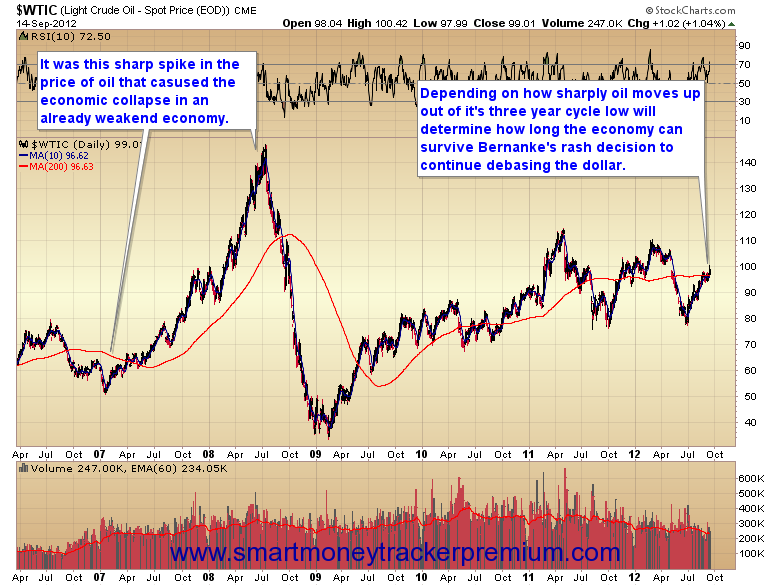 I think it’s safe to say that Bernanke doesn’t understand his role in causing the recession of 08/09 as he is now making the same mistake again. I think he believes the recession was solely triggered by the financial meltdown. That was the icing on the cake, but not the initial trigger that caused the recession.

Despite the complete inability of QE to heal the economy or job market, and since he really has no other tool, Bernanke just keeps doing the same thing over and over expecting a different result, but never getting it.

Commodities are the check that prevents  Keynesian economic policies from healing the global economy. Keynesian academics either don’t understand this, or refuse to acknowledge it. Until they do, or we install Austrian economic advisers in the government, we are destined to continue making the same mistakes over and over.

So we will watch the price of oil as it rises out of its three year cycle low. If it hits $160 by next summer that will probably be enough to start the economy on the next downward spiral. If politicians get involved (and I’m sure they will) and try to impose price controls, they will multiply the damage and probably guarantee that the next economic downturn escalates into a truly catastrophic depression. GET A FREE TREND ANALYSIS FOR ANY STOCK HERE!

Until we see the spike in oil and the corresponding damage to the economy, no one has any business try to short anything, well maybe bonds, but even that will be risky because the Fed is going to be actively trying to prop the bond market up and keep interest rates artificially low.

All in all there is going to be so much money to be made on the long side, especially in precious metals, that no one needs to fool around with puny little gains on the short side, especially in a market that is going to be hell to trade from the short side. The time to sell short will be in 2014 after the dollar’s next three year cycle low. The dollar’s rally out of that bottom will correspond with the next global economic collapse, ultimately caused by the decisions made by the ECB and the Fed this past week. I dare say if they could see the damage their decisions are going to inflict upon the world and the dire unintended consequences, maybe they would finally stop kicking the can down the road and let the economy heal naturally. Of course that would entail several years of severe pain and politicians, as we all know, are extremely allergic to that.