From John Ballard: The share prices of top video-game stocks have fallen hard over the past six months. Though Wall Street is worried about the impact of Fortnite, there are still favorable trends underpinning the growth trajectory of the leading game makers.

Electronic Arts‘ (NASDAQ:EA) stock has already rebounded about 18% since the beginning of the year, and I believe it’s only a matter of time before investors get over their fears and send the stock prices higher for Activision Blizzard (NASDAQ:ATVI) and Take-Two Interactive(NASDAQ:TTWO).

One of the surest signs that the top game makers will continue to grow revenue over the long term is the increasing cost to create a video game, which favors the companies with the largest spending budgets as opposed to smaller game studios.

About 20 years ago, it cost only a few million dollars to make an average video game. That cost has skyrocketed to hundreds of millions of dollars since then — on par with blockbuster movies. Today, it can easily cost around $250 million or more to make a video game like Activision’s Call of Duty or Take Two’s Red Dead Redemption 2.

The reason games are getting so expensive to make is the advancement in graphics realism and the increasing cinematic scope of storytelling in video games, which have become like watching an interactive movie. It’s common for game companies to hire the talents of Hollywood actors to do voice-over work for in-game characters, and this drives up the cost of game making as well.

We can see the tangible impact of the escalating cost in the following chart, which shows the change in research and development (R&D) expense for EA, Activision Blizzard, and Take-Two over the past few decades. 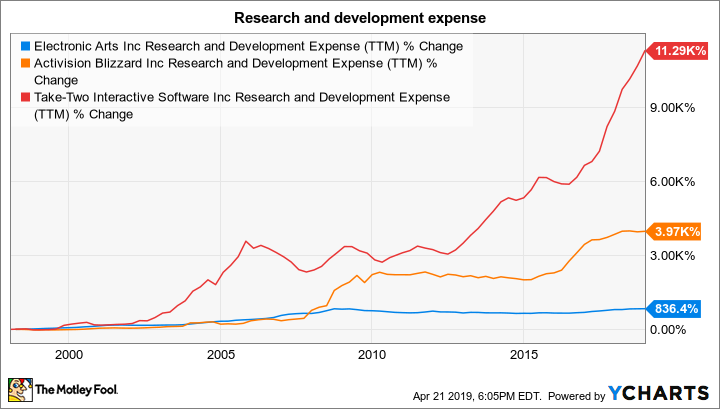 What all this means is that it is getting increasingly risky for an independent game studio with a small budget to make a video game. In 2017, there were more than 7,000 games released on Steam, the digital game distribution platform for PC. Many of those games never reach a mass audience to justify spending millions of dollars.

The cost to make games will only keep increasing as graphics technology gets more sophisticated, causing small studios to think twice before spending massive amounts of money on a game that may never see the light of day.

The escalating cost of game development is a key reason why the annual top 10 best-selling video games list is typically dominated by titles from the major game companies. There are a lot of quality games that get made from small studios every year, but many of these smaller companies don’t have the resources to invest in distribution and marketing to let their games reach a sizable player base.

Not surprisingly, several studios have gone out of business during the past year. The studios that have talent and great ideas but not enough money to work with usually become acquisition targets. For example, EA acquired Respawn Entertainment for $455 million in 2017, and Take-Two acquired the maker of Kerbal Space Program. Microsoft and Sony have gobbled up several studios over the years to bolster their exclusive lineup of titles for Xbox and PlayStation.

You can see where this is going. The big keep getting bigger, while the little guys scramble to survive. This could lead to the large players like EA, Activision, and Take-Two gradually chewing up a greater share of spending of the $135 billion video game industry over the long term.

It’s estimated that the number of people around the world who play a video game will increase from 2.2 billion to 2.7 billion by 2021. A lot of those could be casual players who are starting to play mobile games, since mobile is the fastest growing area of the video game industry.

However, the telling statistic is the estimated number of people who play PC games, as that is the platform that tends to draw the most dedicated gamers. It’s expected that 200 million new players will be gaming on PCs by 2020, reaching a total of 1.4 billion.

3. Valuations have come down

Last but not least is the appeal of cheaper stock prices. Activision, EA, and Take-Two trade at much lower valuations than they did a year ago. 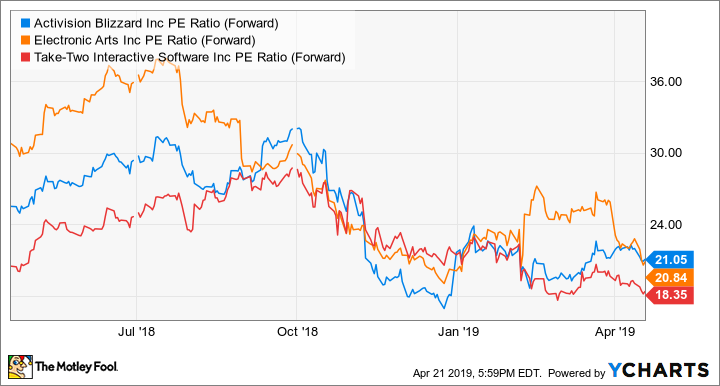 Stock prices are down in recent months because of concerns about near-term growth, which hasn’t been exclusive to companies in the video game industry but many other stocks as well, given the uncertainties about the broader economy.

However, the long-term trends of increasing game costs, favoring the deep pockets of the big game companies, and the increasing number of people playing games should lead to growing revenue over time for Electronic Arts, Activision Blizzard, and Take-Two Interactive. This is an ideal time, when Wall Street is pessimistic, to consider buying shares of these game companies.

The ETFMG Video Game Tech ETF (GAMR) was unchanged in after-hours trading Tuesday. Year-to-date, GAMR has declined -5.30%, versus a 10.19% rise in the benchmark S&P 500 index during the same period.

GAMR currently has an ETF Daily News SMART Grade of B (Buy), and is ranked #28 of 42 ETFs in the Consumer-Focused ETFs category.

This article is brought to you courtesy of The Motley Fool.