Evercore analysts expect another leg down in the memory chip market in the fourth quarter of 2019 and now see the industry’s recovery pushed to the second half of next year.

As a result, they said they are becoming more selective in the chip sector and slashed price targets on some stocks.

The analysts said a reason for their negative view is they see continued excess inventories in both DRAM and NAND memory. NAND storage is a primary storage, which is commonly used in such things as cell phones and USB flash drives. DRAM memory is different in that it used to allow computers, phones and tablets to run multiple applications at the same time, but it is not primary storage.

They said they see the most near-term downside risk for Western Digital,Micron and Lam Research. All of those stocks were trading down more than 4% in morning trading. The analysts said they prefer ASML and Applied Materials. 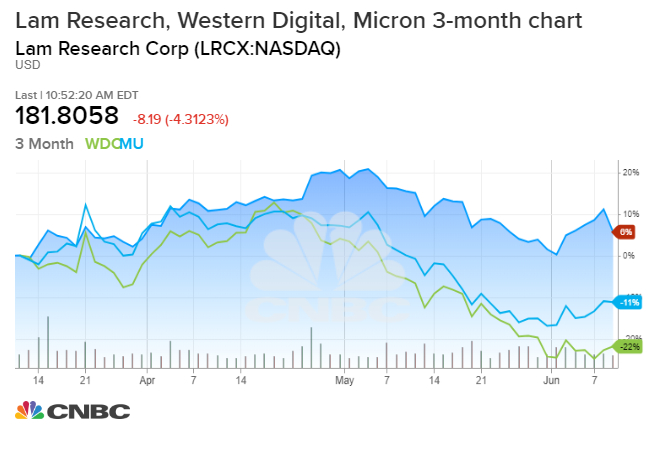 Other analysts have been more positive and see the industry turning the corner sooner.

Lam Research was downgraded to inline, and the analysts cut its price target to $195 from $225.

“While we reduced our estimates 2 weeks ago for [Micron], worse trends since then causes one more cut– we are better buyers in high $20?s. For [Western Digital], we maintain Underperform rating and $30 PT. We see ongoing excess inventories weighing on NAND pricing through CY19,” they wrote.

Also weighing on chip stocks is the risk from Huawei, which the U.S. government is banning from using U.S. suppliers.

SMH currently has an ETF Daily News SMART Grade of A (Strong Buy), and is ranked #16 of 79 ETFs in the Technology Equities ETFs category.