The current equity rally could be coming to an end soon, at least according to mounting signals from the bond market.

As 10-year Treasury yields continue to fall to new lows, numerous yield curve inversions are a “clear warning” that a topping out process is underway in equities, Societe Generale analyst Albert Edwards said in a note Thursday. He was citing a study done by Lance Roberts, the chief strategist and economist for RIA Advisors.

According to Roberts’ study, yield curves and topping processes are “close cousins,” as a more regular occurrence of inversions usually precedes downward pressure on stocks. Yield curve inversions have “real world impacts on a variety of areas which affect real economic growth,” he wrote.

That weakened economy then puts pressure on stock prices, which rely on profit growth first and foremost to generate gains. It can also portend a full-blown economic recession, something that an inverted yield curve has also historically signaled. 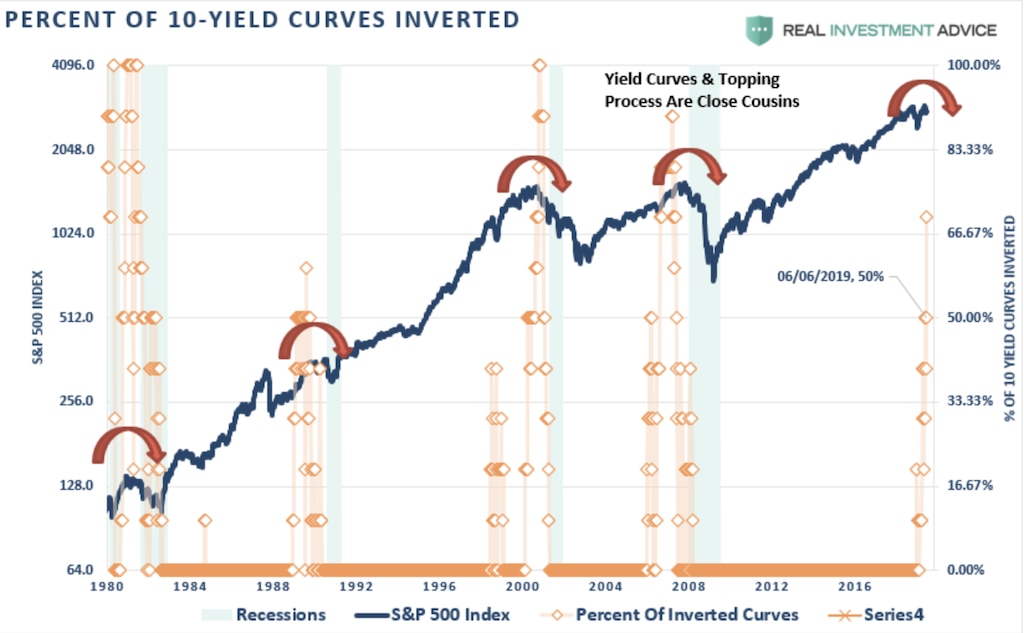 Speaking of a possible recession, the bond market flashed a dreaded signal in May, when the spread between 10-year and 3-month Treasury spread inverted, an important warning signal for the economic world. While equity investors have previously ignored the bond market’s hand-wringing over the yield curve inversion, recent escalating tension from the trade war has led even equity investors to expect rate cuts from the Fed in an effort to keep the economy afloat.

“The rumblings of the US bond market have now turned into an ear-piercing scream that a recession is close and the Fed needs to start cutting rates quickly,” wrote Edwards.

But SocGen says overoptimism around a rate cut could lead to stock-market disappointment in the near term. That certainly jibes with the firm’s house view that one reason stock-market performance has stayed strong is that the bond market signal is due to the lack of inflation, and does not necessarily point to an imminent recession.

Even if this is the case, the timing and movement of the Fed is important for equity markets. A separate SocGen team led by Alain Bokobza says that the fluctuations that result from future interest-rate uncertainty and unfulfilled market expectations could lock the S&P 500 in a range between 2,500 and 2,800.

Even though the US economy is “showing resilience” at the present, that’s due to compounding factors driving markets, the analysts say. Global conditions and increased trade tension have pushed investors into bonds, while the equity market has been boosted by Chairman Jerome Powell opening the door for an early rate cut.

As these factors progress, market performance will adjust and stocks could see downward pressure from increased economic weakness.

To that end, equity investors should be cautious and heed the warnings of the bond market, the analysts say. Even if trade talks between the US and China produce better news-flow or a trade deal, it may only be a “temporary reprieve unfortunately from the looming, global cyclical slowdown in 2020.”

The iShares 20+ Year Treasury Bond ETF (TLT) was unchanged in after-hours trading Friday. Year-to-date, TLT has gained 4.50%, versus a 8.83% rise in the benchmark S&P 500 index during the same period.

This article is brought to you courtesy of Markets Insider.