From Lizzy Gurdus: Talk about shine.

Gold surged to 14-month highs last week amid uncertainty about the fate of U.S.-China trade relations and the U.S. Federal Reserve’s plans for monetary policy ahead of a meeting between the central bank’s leading officials.

But even in light of the positive results, the precious metal’s power as a safety trade isn’t waning, but could actually be set to spike, says JC O’Hara, chief market technician at MKM Partners.

“I really think this short-term positive momentum really caught a lot of investors off guard … because, for the last five years, gold has basically done nothing,” he said Friday on CNBC’s “Trading Nation,” pointing to a chart of the SPDR Gold Shares index, or GLD, a popular gold-backed exchange-traded fund that hit a new 52-week high on Friday. 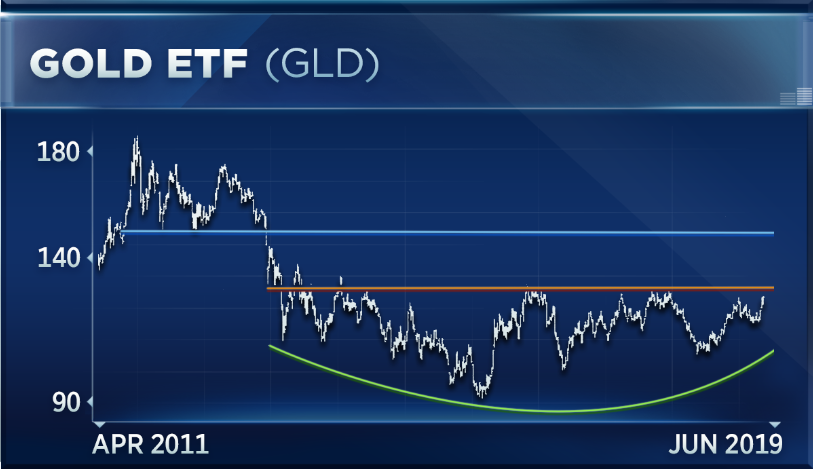 “However, the technical shape that it’s slowly starting to take on is that of a base,” typically a bullish signal for technicians, O’Hara said. “What we’re really looking for is if this short-term momentum continues and we see a break above that [$]129, 130 [level], which was that former resistance that was unable to be broken over the last few years.”

If gold prices do push past their five-year trading range, that would be a major green light for prospective gold buyers, O’Hara said.

“We get above that level, and I think investors will come running back into gold because, really, there’s not much between there and [$]148 on GLD,” he said. “So, I think we’d be buyers of a breakout here.”

“We don’t own it right now,” he said in the same “Trading Nation” interview. “We’re not opposed to it, but it has to be for the right reason. In my opinion, there’s two reasons to own gold. The first is for risk-off purposes, and the second is as an inflation hedge. And, right now, gold’s benefiting from the risk-off trade.”

Gold outperforming copper for the last two months has been “a great risk-off indicator,” Tepper added. “I do think it’s great to own as a calamity hedge, but there’s no inflation in sight, so I don’t think the rally in gold is sustainable, and we’d only be owning it for protection purposes.”

And, in terms of Tepper’s long-term outlook, investing in gold might not be the best play for investors, he said.

“I don’t think this bull market is coming to an end,” he said. “I think the market trades sideways and range-bound unless and until a trade deal happens, but consumer data still looks pretty healthy, so if there’s no recession and no inflation, it’s just not a fit for us right now.”