Seasonality can be a powerful force in commodities markets. In agricultural commodities, the time of the year when uncertainty peaks is during the late winter and early spring in the northern hemisphere. The United States is the world’s leading producer and exporter of soybeans and corn, and a significant exporter of wheat. Each year, the weather conditions across the fertile plains of the US determine if crop yields will be sufficient to meet the world’s requirements. The last time the weather interfered with the production was in 2012. That year, the prices of corn and soybeans rose to all-time highs in the futures market, and wheat prices rose dramatically because of drought conditions.

When it comes to the natural gas futures market, the peak season is during the winter months when demand for heating around the US causes inventories to decline. Stockpiles of natural gas fell from mid-November through March each year as demand causes withdrawals from storage. From March through mid-November, injections into storage prepare for the peak winter season. With only three weeks to go before the start of the time of the year when stockpiles will decline, the natural gas futures market is preparing for what can be the most volatile period for prices. Only Mother Nature knows what the average temperatures during the winter season will be, and that will determine the rate of decline in natural gas inventories. Uncertainty can be the most significant factor when it comes to price volatility. The United States Natural Gas Fund (UNG) is a highly liquid non-leveraged ETF product that moves higher and lower with the price of the energy commodity.

An anniversary of an explosive rally

Last year at this time, the price of natural gas was preparing to explode to its highest price since 2014. 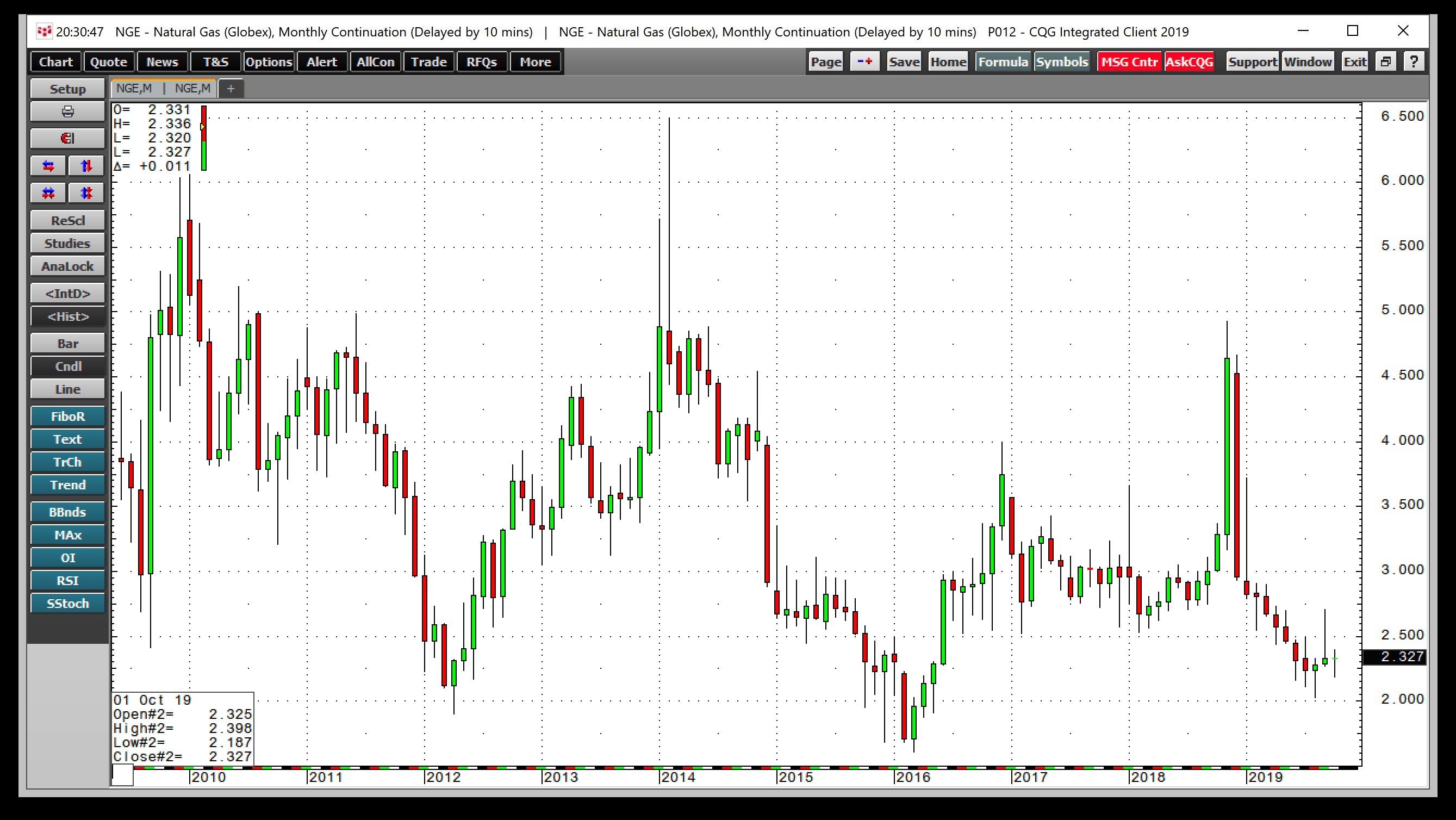 The monthly chart shows that last November, the price of nearby natural gas futures rose to a peak of $4.929 per MMBtu. The last time the energy commodity traded to that level was in February 2016 when the price made it to $6.493 per MMBtu. The price closed at the end of October last year at $3.284. Last Friday, nearby natural gas futures were trading at just over the $2.30 level, appreciably lower.

Inventories say a repeat performance is not in the cards

The peak season for demand in the natural gas market is only weeks away. In mid-November, the injection season that lasts from March through November each year will end, and inventories will begin to decline. In 2018, natural gas in storage around the US rose to a high at 3.247 trillion cubic feet, the lowest level in years. Cold weather in November and low stocks ignited the price of the energy commodity on the upside. However, during the months that followed, the price of natural gas fell sharply. After November, the price posted losses in eight consecutive months. After rising to the highest level since 2014 in November 2018, natural gas futures fell to the lowest price since 2016 at $2.029 per MMBtu in August.

As of October 18, natural gas inventories stood at 3.606 trillion cubic feet, which was appreciably higher than last year’s level at this time of the year. The level of stocks is a sign that we will not likely see a repeat of last year’s rally last month. However, that does not mean that the price is not heading higher from the current level. As of the end of last week, the market expects an injection of around 89 billion cubic feet.

In a sign that natural gas could be heading high as the peak season for demand is just around the corner, the price has made higher lows since early August. 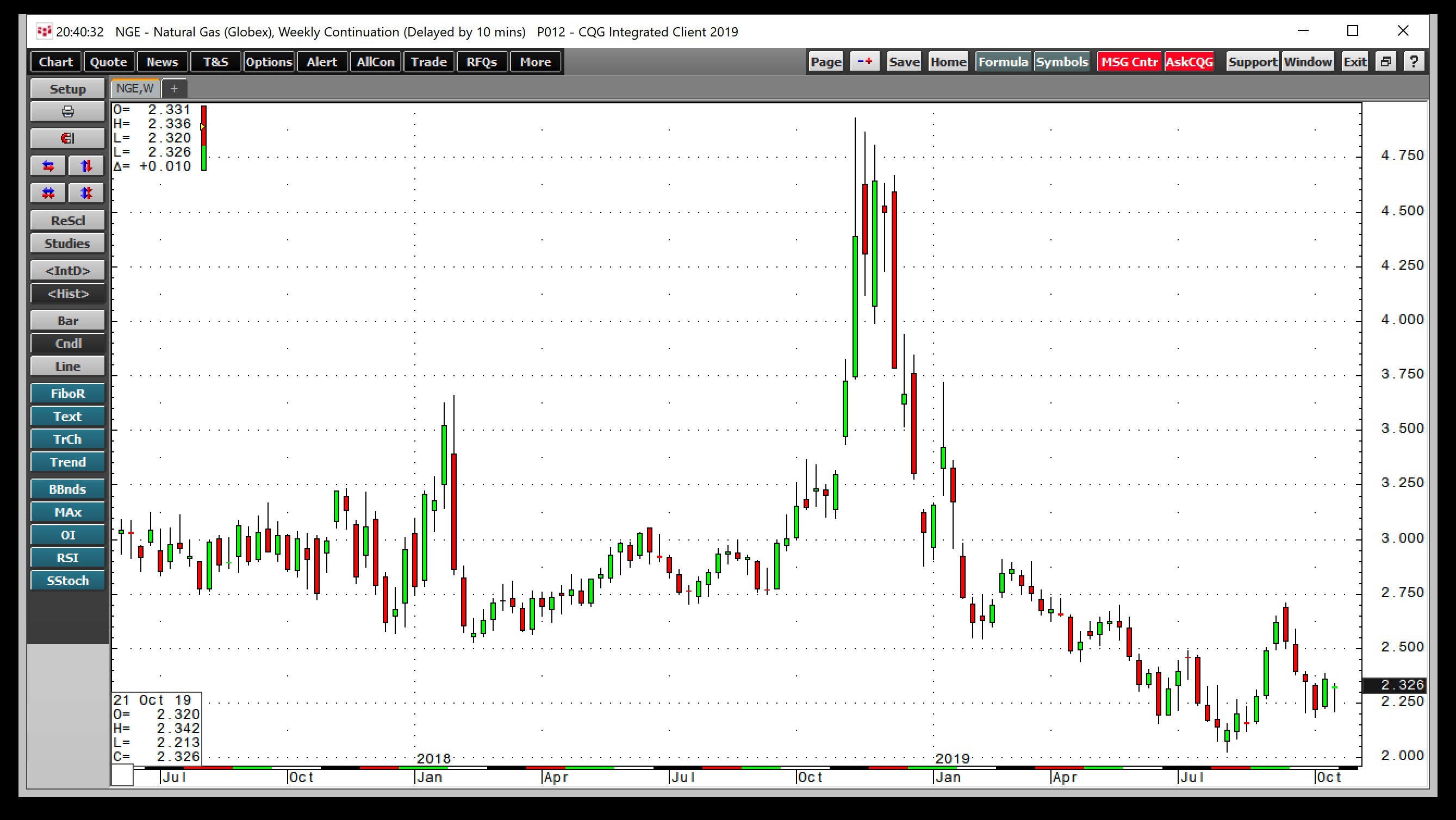 I do not believe we will see a low below the October 21 bottom at just over $2.20 per MMBtu in 2019. If I am wrong, it will not be a disaster. At the $2.30 level, risk-reward continues to favor the upside as seasonality can be a powerful force at this time of the year.