The Federal Reserve had its last meeting of the year yesterday, and not surprisingly, the meeting was a non-event with no further cuts. The Fed noted that we were likely to see a pause next year, while it watches to see how things shake out for the economy. Ultimately, this is a good sign for the precious metals, as we are likely to see inflation pick up next year with loose monetary policy sticking around for another year. Gold (GLD) and silver (SLV) were relatively flat following the meeting, but the metal continues to build a new base after its near parabolic climb in Q3. While there’s no guarantee that the lows are in for silver, I continue to see this new base-building process as constructive, and would ideally like to see a drop in small speculator positioning to confirm the bottom is likely in.

Silver has seen a slight bounce this week after last week’s 3% drop, but the bulls continue to defend the important $16.25/oz level. The good news is that despite silver only making a marginally lower low just 3 pennies below its October low, we finally saw a little more fear among bullish sentiment for silver, which dropped below the 50% level. Bullish sentiment has since rebounded to 59%, from the 46% reading on Friday, but the drop to a lower low is at least a step in the right direction. While I would ideally like to see a drop below 40% bulls or more, this prolonged period of more balanced sentiment has allowed the 16-week sentiment moving average to drop from 80% to 60%, another slight improvement.

If we move over to small speculator positioning based on COT data, we can see that positioning remains near its highs as of December 2nd 2019. However, this was before last week’s drop, and it’s possible that some of this positioning has been cleared out since. This would be ideal if this was the case, and the current positioning among small speculators suggests a high probability that any rallies to the $18.70/oz – $19.00/oz zone will fail. The reason for this is because we already have slightly crowded positioning at below $17.00/oz for silver, and it would likely get worse and too crowded with another 10% jump. 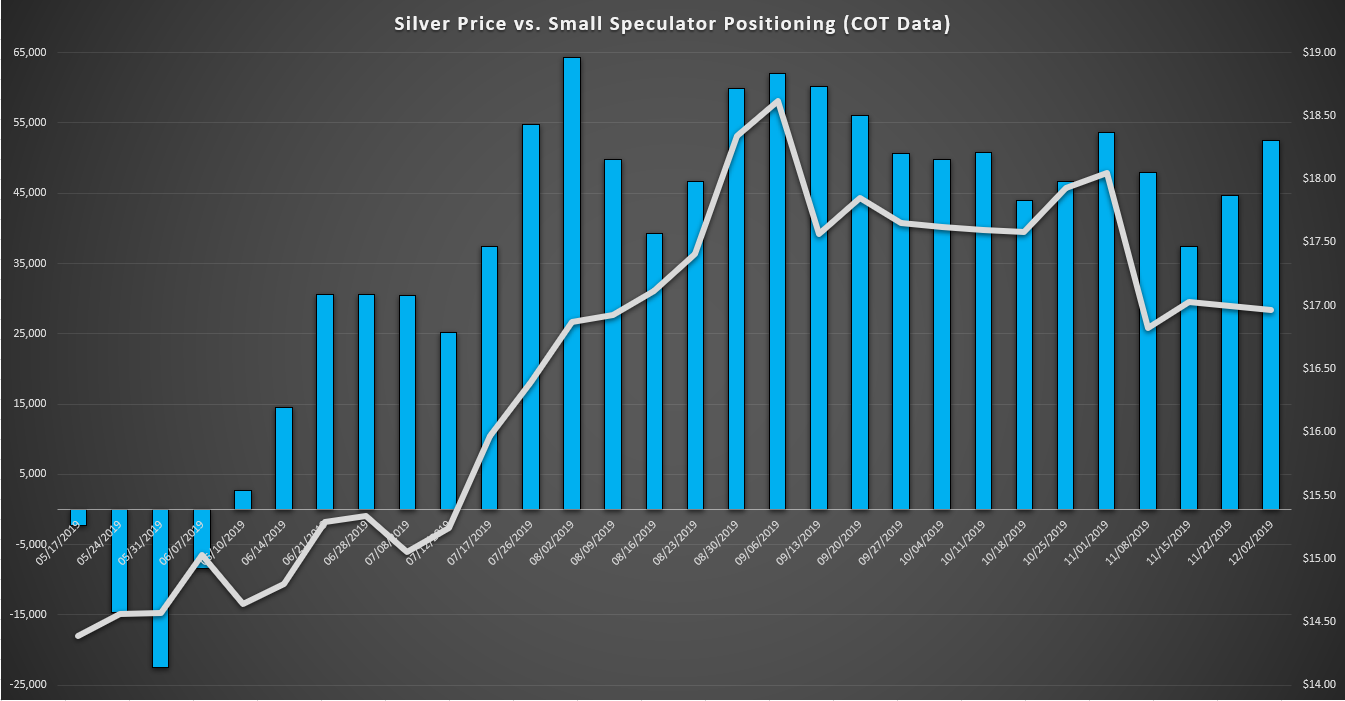 Based on these two indicators which reveal sentiment in the market, I continue to see more bullish sentiment than I would like to see, but nowhere near alarming levels of optimism. This suggests that it’s very difficult to forecast the next 10% move in the price of silver given that we’re on a more or less neutral reading. However, and as noted, if we were to rally 10%, I believe it would be time to start selling again.

Finally, taking a look at the technical picture, the 10% rally that would define a crowded trade for silver also lines up with the $18.45/oz strong resistance for silver, and suggests that profit-taking is the wise move if a rally of this magnitude occurs. In terms of support, we have strong support at $16.25/oz, and I continue to view this as a low-risk area to start a position in silver. A drop to this area would likely succeed in pushing more weak hands out of this silver trade, and would also mark a near 20% correction from the September high. Not only would this have people second guessing their long positions in the metal, but it would also likely get the media to trot out their bear market calls for silver given the 20% drop. 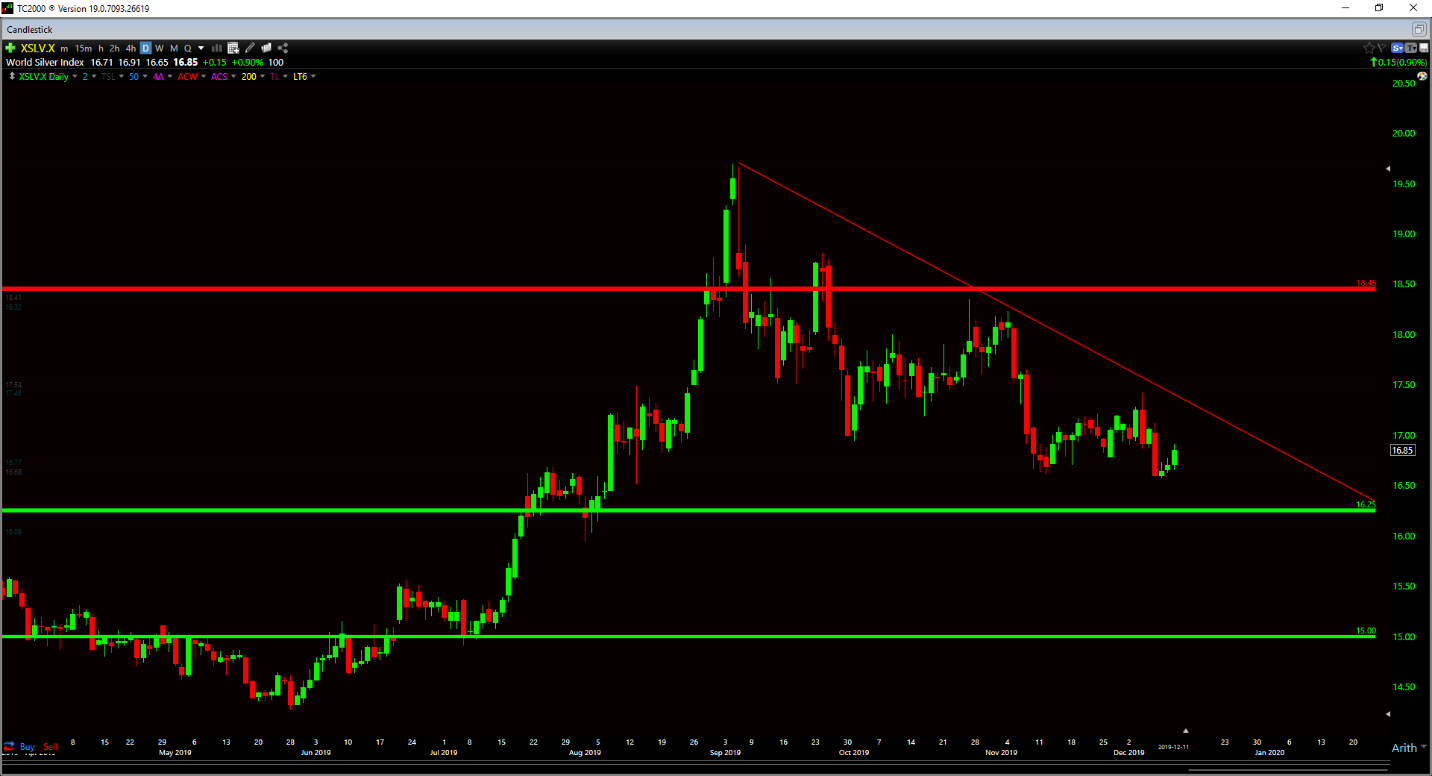 In terms of the quarterly chart, silver remains above its key quarterly moving average (pink line), and this is a must defend level. A break below this level at $15.90/oz would signal abnormal weakness, and would suggest we might need to re-test the bottom of this base for silver near $14.00. 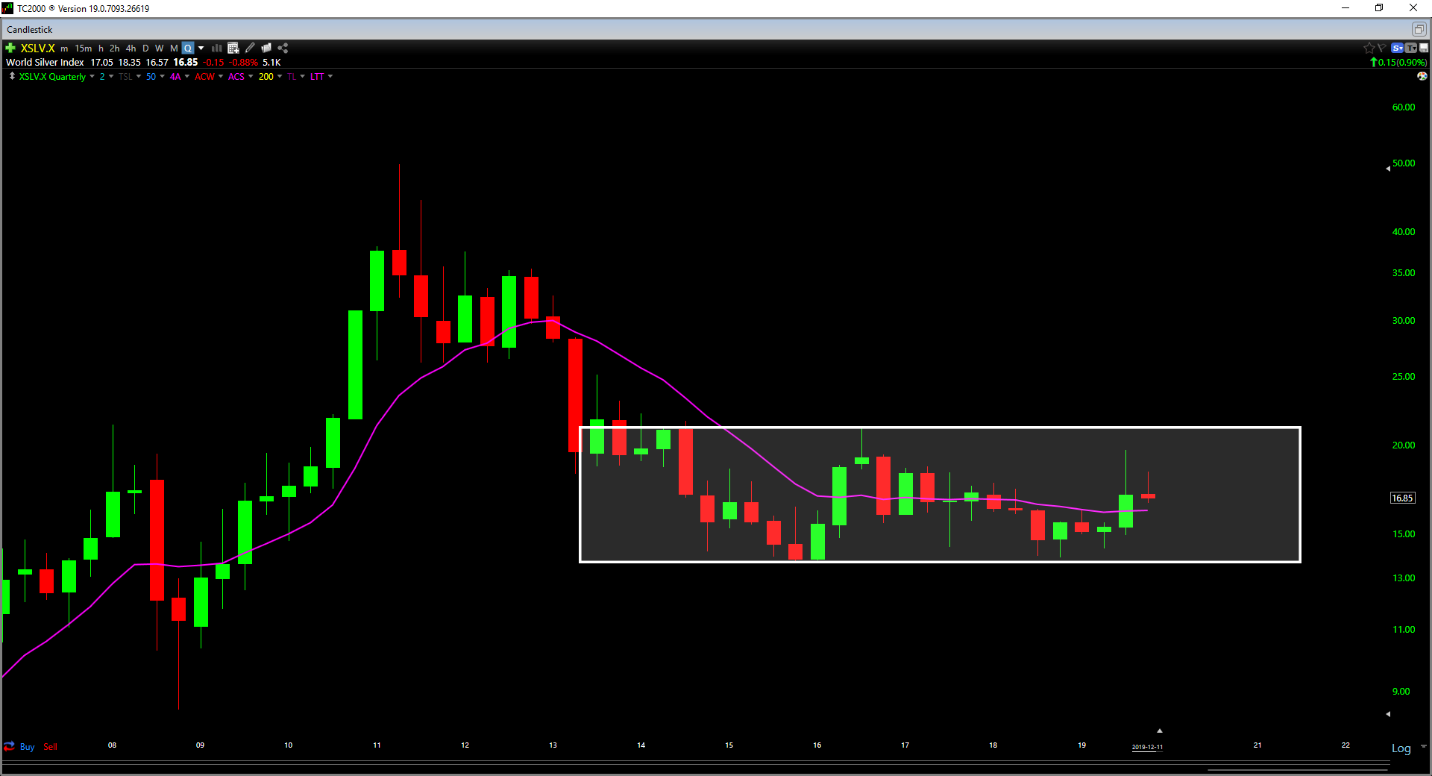 In summary, I see silver as a hold currently given that it’s trading in the lower portion of its daily range, and still has a bullish posture on its quarterly chart. However, I believe the prudent move would be to book profits into any 10% rallies, as sentiment is still not at levels that typically allow for a prolonged uptrend.  Based on my neutral rating for silver, I have chosen gold over silver and remain long gold from $1,455/oz. For me to consider a position in silver, I would want to see a drop beneath $16.30/oz at a minimum.