After last week's outstanding employment figures, investors expected a fairly dull FOMC release yesterday. After all, what more is there to say other than "gee, things seem to be going well, so we're going to wait for a while before we do anything."
NYSE:SLV December 12, 2019 10:51am

Today we saw silver (SLV) drop more than 2% and I believe it is still difficult to have high conviction that the lows are in at $16.50/oz. This is divergent from the action we see in gold (GLD), where sentiment is near May levels, and we've seen small speculators shed a significant amount of long contracts despite a more modest drop. Let's take a closer look below: 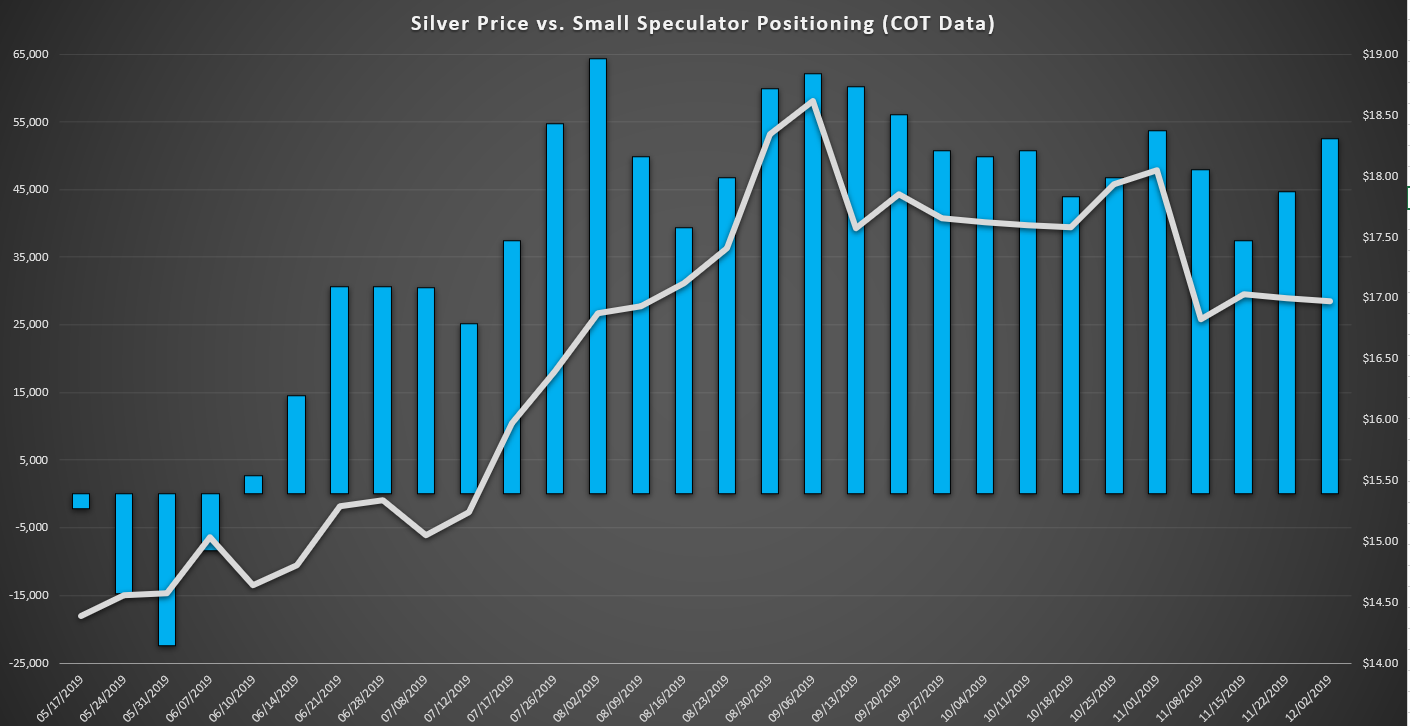 As we can see from the chart of silver with small speculator positioning, we can see that the silver price tends to perform the best when the small speculators are net short or flat. From early May to mid-June, small speculators had their lowest long positions in months, and the price of silver shot up 10% in less than a month. The blue bars in the above chart represent this positioning, while the silver line represents the silver price. One could argue that we saw a similarly strong move in price while small speculators were at their highest levels in early August, and this is true; however, there's one key difference. While the sharp rally of 10% in a month from early May to mid-June held all of its gains and has not been revisited, the sharp rally in early August has fizzled out completely. Therefore, if one is positioning from an investment standpoint and not from a short-term swing-trading perspective, this makes a massive difference.

The recent dip in silver prices saw small speculator positioning drop to 37,500 contracts, and this was a positive sign. However, despite the silver price going sideways the past two weeks, we've now seen small speculators add back all the contracts they sold out on the drop. This suggests that the bulls are getting more confident despite no move higher for the price of silver, and this isn't generally a great sign. This applies in the opposite direction as well, if silver prices were going up and no one was getting bullish, this would be a great sign - suggesting there was skepticism about the rally.

If we move over to sentiment for silver, we also see more of the same. Bullish sentiment collapsed from 95% bulls down to 50% bulls but continues to hover near the 60% bulls level currently. This means that despite silver being more than 10% off of its highs, we still have more bulls than bears. For me to have more conviction that the lows are in, I'd want to see small speculator positioning drop to below 30,000 contracts and bullish sentiment drop below 40%. Currently, neither of these two things has been satisfied.

Finally, looking at the price chart below, we can see that the $16.20/oz level represents a small gap on the Silver ETF, and I would say it has at least a 50% chance of being filled. This gap-fill would likely force anyone long silver to begin to rethink their positions considerably, and this is a much lower risk entry than current levels. As it sits right now, we have resistance at $18.25/oz, and we remain below the short-term downtrend line off the September highs. 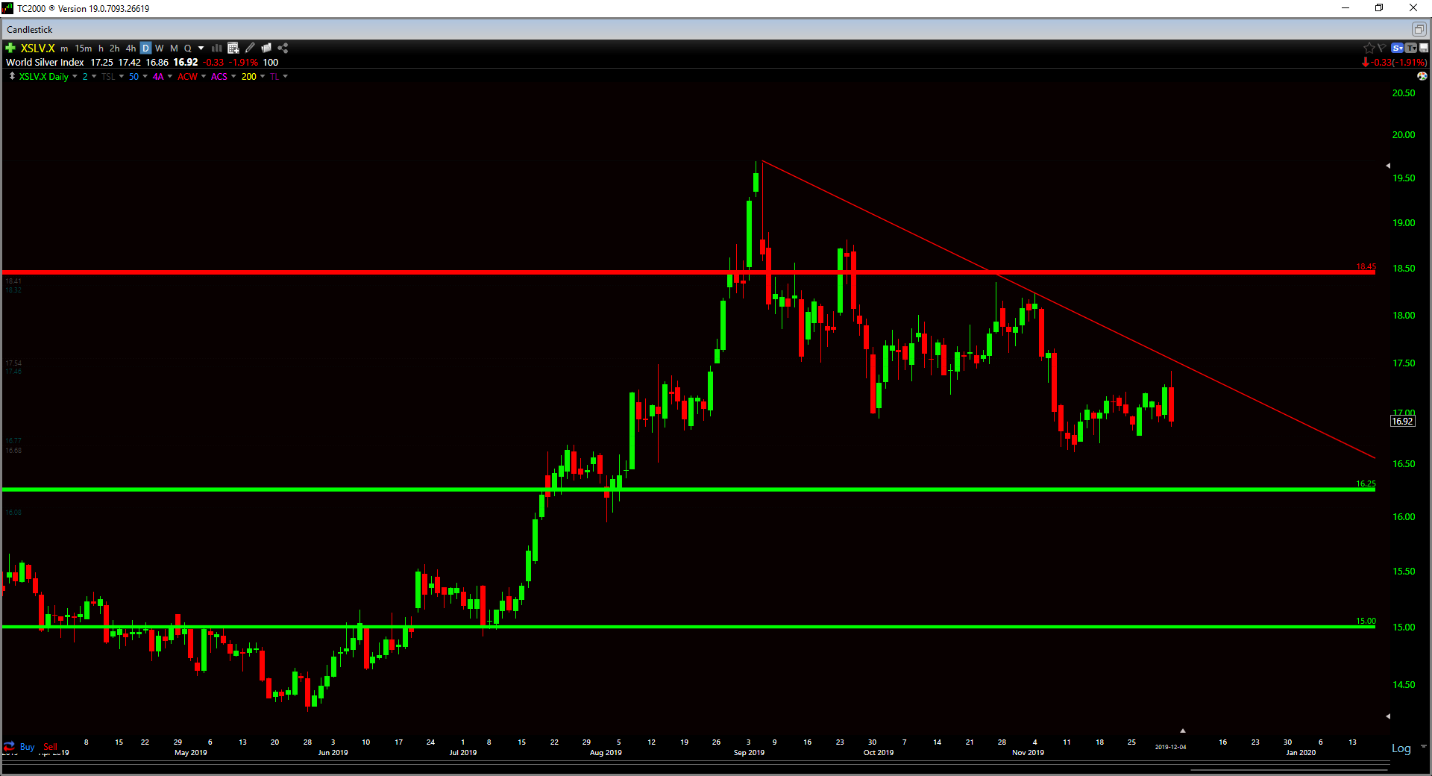 While it is possible that silver bottoms without these conditions being met, I would be very inclined to sell silver if it heads back towards the $19.50/oz level if this occurs. This is because bullish sentiment would likely be hitting mania levels once again above $19.00/oz if we already see minor complacency while silver is meandering around near its lows. In summary, I believe the $16.20/oz level represents a low-risk area to go long silver, and I would be a seller above $19.50/oz. Time will tell where the market heads first, but I am still enamored with the setup in silver currently from a reward to risk standpoint.

Taylor Dart has over 10 years of experience in active & passive investing specializing in mid-cap growth stocks, as well as the precious metals sector. He has been writing on Seeking Alpha for four years, and managing his own portfolios since 2008. His main focus is on growth stocks outperforming the market and their peers. In addition to looking at the fundamentals, he uses different timing models for industry groups, and scans upwards of 2000 stocks daily to identify the best fundamental opportunities with the timeliest technical setups. Taylor is a huge proponent of Trend Following and the "Turtles" who enjoyed compound annual growth rates of over 50 percent per year.
NYSE:GLD December 6, 2019 12:38pm