Tony Daltorio:  Since hitting a high on June 12, the Shanghai Composite Index has tumbled nearly 30%. The recent rout in stock prices, which wiped out nearly $2.4 trillion in market value, was the worst three-week drubbing for the index since 1992.

The carnage was particularly acute for many stocks in the ChiNext index, which is the Shenzhen Stock Exchange’s equivalent of the Nasdaq Composite Index. It is filled with listings of fast-growth technology companies. Think of it as the Nasdaq circa 2000, but on steroids.

But the recent correction wasn’t particularly surprising, considering that the Chinese stock market had doubled in value since June 2014 and had risen by about a third this year alone. And bear in mind that this rip-roaring rally occurred at the same time the Chinese economy was slowing.

The last partygoers were small, retail investors using margin accounts. Margin debt had risen sevenfold from the start of 2014 to June 2015 – a classic sign of an end nearing.

The fast and furious nosedive has caused the Chinese authorities to take actions to try and stem the tide.

China has already cut interest rates. Now it is also calling for a moratorium on initial public offerings in order to preserve liquidity. IPOs in the pipeline were worth about $650 billion. Beijing last took this course of action in 2012.

The big gun in China’s arsenal will be a stock market stabilization fund. It is set up by the country’s largest 21 brokerage firms, with financing largely from the central bank. It is doubtful, though, that this fund will help the small companies listed on the ChiNext. It will be aimed at the biggest Chinese red chip companies.

Beijing has tolerated big stock market tumbles before. Think of the 2007-2008 period, as shown in the Wall Street Journal chart below: 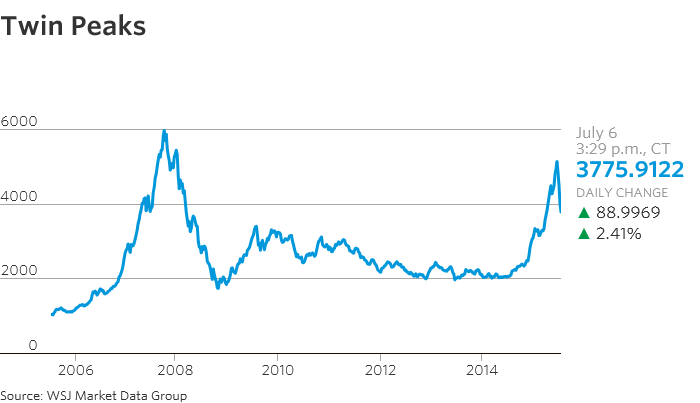 Why all the concern by the Chinese government now? Because it desperately needs a strong stock market, which is a key ingredient in its efforts to clean up the SOEs – the more than 100,000 state-owned enterprises.

You see, the government hopes to clean up the balance sheets at these mostly poorly-run and indebted companies. Debt now makes up about 65% of the average SOE’s total assets.

The government hopes a booming stock market will allow these firms to sell equity. This capital, in turn, can then be used to pay off debt. Companies with cleaner balance sheets and higher market capitalization can then be more competitive.

Beijing is pushing the SOEs to reform and consolidate. But it’s tough to buy another firm when you’re choking on debt.

Beijing’s tactics had been working. Chinese companies have raised $97.1 billion on the market to date. According to Dealogic, that is the highest ever year-to-date, and it’s 81% more than the $53.6 billion raised at this point last year.

So what happens now? Is the party over for good?