Corey Rosenbloom: After springing a Bear Trap, Apple Inc. (NASDAQ:AAPL) shares pivoted and trapped the short-sellers, placing price on a pathway straight up toward all-time highs.

Let’s update our Apple analysis, pinpoint the Trap Lesson, and plot what levels are most important now. 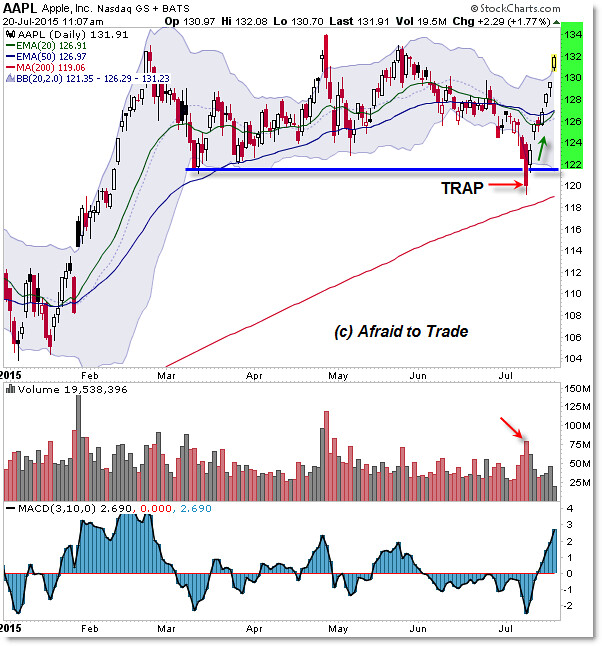 For our prior update on Apple, see the post “Apple Breaking Down – New Level Planning.”

I wanted to update you on the trigger break, potential for a trap, and what to watch early in July.

Note the Daily Chart “Price Pathways” (color highlights) and target down toward the rising 200 day SMA in the prior post.

“Ultimately, buyers can once again find value here and “bounce” the stock up away from this level for a fourth time, creating an aggressive buy opportunity (with a tight stop).”

What looked like a genuine sell-short opportunity (breaking under $122 and $121.50 as mentioned) was successful ONLY toward the $119 level which was actually just above the rising 200 day SMA.

Given that price broke down, triggered a short-sell signal, and then instantly reversed ahead of the likely target, we have a BEAR TRAP outcome.

Bear Traps tend to produce explosive movements in the opposite direction as traders are trapped and forced to liquidate positions that are losing money rapidly.

In this case, both short-sellers capitulated on the return ABOVE the $122 breakdown level, triggering an aggressive buy signal with a price pathway toward the prior high.

We can’t predict in advance when buyers will spring a Bear Trap (or sellers spring a Bull Trap), but we as traders can adapt in two important ways:

Know what a Trap is, know what likely happens AFTER a Trap occurs, and adjust accordingly.

It’s a spot to limit losses immediately, because small losses can become huge losses if we fight the price and hold on to a trap outcome.

By the same token, we can enter a new aggressive position on the trap outcome, reaping instant profits on the “bigger movement in the opposite direction” as one side of the market is thrown rapidly off balance.

Nevertheless, Apple gives one of many real-world examples of the importance of planning – without bias – and reacting (as soon as possible) to unexpected outcomes like traps.