Though it was the previous Apple earnings report that sent the stock higher by 8% and ignited a 26% rally, I wouldn’t expect such a move from the stock today.

Apple’s iPhone numbers came in a bit higher than expected, growing 13% compared to the same quarter last year. Tim Cook mentioned that it saw the most growth in its so-called middle tier phone – the 5C. Tim Cook also mentioned that iPhone sales were up 55% in the BRIC nations – Brazil, Russia, India and China. I consider that to be a very promising sign. There’s one other thing. Though this shouldn’t come as a surprise to those who follow the stock closely, Apple is still hugely dependent on the iPhone. Just take a look at the chart below from MacRumors.com illustrating Apple’s revenue sources by category. As you can see, iPhone is clearly the dominant contributor. 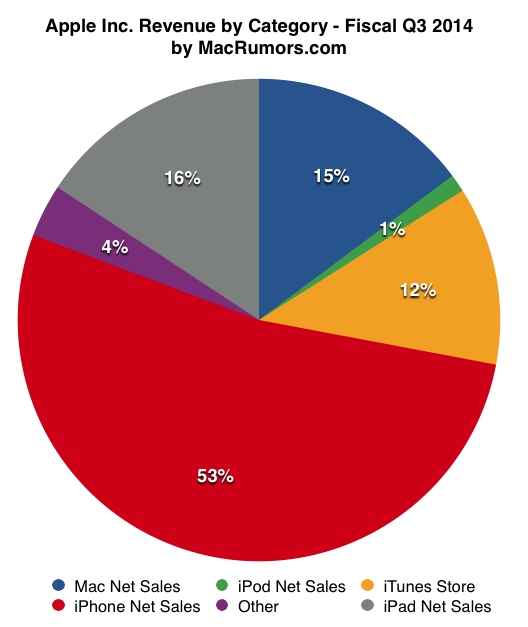 2. …but increasingly, it is about Mac too.

In an industry that is shrinking at a rate of 2%, Apple’s Mac unit experienced 18% growth. Mac seems to be one of the bright stars of the industry, bucking the global decline in the PC market. Mac has also gained PC market share in 32 of the last 33 quarters with its Mac division. Mac product sales were up 39% in China where the PC market is declining by 5% annually. Apple’s Mac unit is strong.

3. “iPad sales weren’t great … but here are a bunch of amazing statistics about iPads!”

Ok, Tim Cook didn’t actually say that. But I think it conveys the gist of his comments regarding the iPad’s performance. “iPad sales met our expectations but we realize they didn’t meet many of yours,” Tim Cook said. He then proceeded to lay on the impressive statistics, such as 98% and 100% user satisfaction ratings for iPad and iPad mini. Or the report that suggests 70% of all e-commerce in the U.S. among tablets came from iPads. iPad sales grew in the Middle East by 64%, in China by 51% and in India by 45%. I think Apple’s iPad unit still has great potential.

4. IBM and Apple partnership is all about penetration.

Enterprise customers – businesses and governments – are a major target for Apple. They’re also a target for IBM (NYSE: IBM). Considering the companies don’t compete and bring different things to the table, Tim Cook thinks the partnership makes a lot of sense. I’m inclined to agree with him. It seems that a primary goal behind the partnership is to drive sales of iPads. Tablet penetration among enterprise customers is only around 20%. In contrast, Tim Cook states that notebook penetration is around 60%. He said Apple would be more than happy to penetrate the market further and I think IBM can help Apple tremendously.

The reality is this. Apple is the world’s largest company. It is nothing short of impressive that it just grew its earnings per share by 20%. What’s more, it did this during what is traditionally its weakest quarter. This Apple earnings report wasn’t about huge price moves up or down. Rather, it was about Apple demonstrating to the markets that everything is well. Tim Cook also made it very clear in the Apple earnings call that we will begin to see new products soon when he discussed Apple’s “incredible pipeline of products and services that we can’t wait to show you.” And I can’t wait to see them and to see what these new products will do for Apple’s stock.